Notes on Most-72 by the Markerists (comprised of Tobias Morgan, Blue Un Sok Kim and Anna Wittek, Poland: 2013 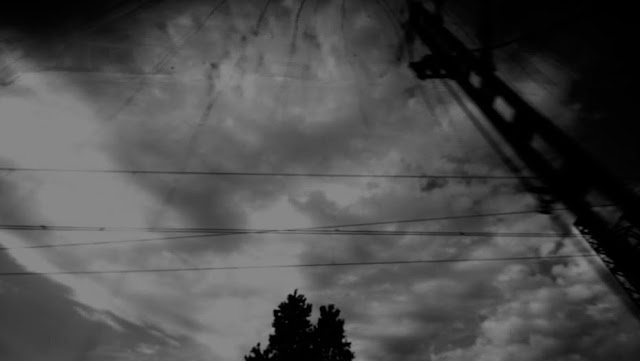 A film is often a journey, sometimes an own, sometimes a shared one and sometimes like following a path. Most-72 is a journey through Auschwitz near Krakow. We are passing through the landscape of this empty landscape: passing by abandoned buildings, the gas chambers the crematoriums.
The railway travels, the walk through Auschwitz becomes a walk through history which will get an uncanny presence like in Marguerite Dura´s Le Main Négatives or her two Aurelia Steiner-films. The over voice comes from an English speaking Indian woman, a person. The speaking is the embodied thinking and feeling. As a film can´t reveal directly what a person thinks of feels, it can give ideas about what we see or hear - for example in this voice. The Indian woman is only present through her voice and this voice is the only physical evidence of her presence.
The landscapes and ruins of Auschwitz we see are abandoned except by some visitors but it is loaded full of what we know about the Holocaust.
The over voice begins more and more to break and changes from a description what she sees and what she knows about Auschwitz to a stammering and we can imagine she is rather stumbling than walking through this landscape.
“What were their dreams?”, she is asking when the imagined presence of the victims becomes an uncanny experience hard to describe.
The film combines a concrete travel to a concrete place, by railways or feet. The voice of a guide leads the woman through the ruins of Auschwitz.  But it also becomes a more complex inner emotional journey. The breaking voice is now more a try to describe what she “feels and experiences”.

“I don´t know what I am doing here.” or “Nothing prepares you.”
For some moments, she walks the way where the victims walked through their dead to the gas chambers.
If the spoken language is a property, a cultural and an intellectual, it fails at the moment if a person is hit by these traces of this genocide. If the spoken language is like clothes we wear, these clothes begin to vanish in this human voice. Near the end the voice is naked the language is not more than a whimpering.
We know film as a men made device can not visualize what really happened in Auschwitz. Even Claude Lantzman with his exemplary film on the Holocaust Shoah knew that. But film can give an idea, sometimes even for small moments with the help of imagination and compassion. And sometimes these ideas in these moments where you feel you are  closer to the horror of Auschwitz are probably even more than a human mind can bear not to mention transform into language.

“Most” is the polish word for bridge and herewith it includes also a kind of “Caméra stylo”. The bridge here is a precise metaphor that Cinema can be more than just presenting images and sound but also to share ideas, experiences and last but not least feelings.

A watchtower of this concentration camp reflected in a pond and always and again the ruins. Even though they are in the process of decay they have survived the victims, victims which left nothing else than ashes and victims which names, identities are forgotten. The Indian woman is the mediator between what the film shows and the audience who has to think, experience and feel - a bridge.

The images of this films are fragmentary, fleeting. It is not a visual monument, but thoughts, emotions, reflections. Even though we live in a culture which pretends to can record and preserve images and sounds forever, the films seems to be more like fleeting memories and reflections depending on a  living body which means also a body which is mortal.

Even though every film is made, thought and finally realised, Most-72 gives me at first the impression that this film shares a piece of lived experience, including thoughts and emotions as authentic as the collaboration between men and the technical apparatus of image-making allows.

Posted by shomingeki at 7:09 PM No comments: