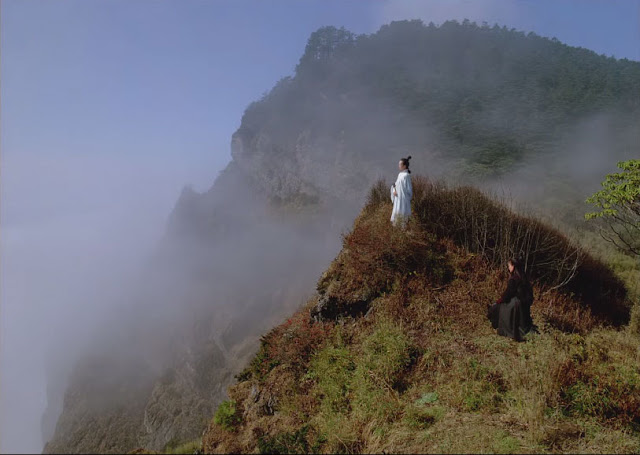 The film is not only a journey into the past (the ninth. Century of China) but it is also for me a kind of travelling back in time. In the late 1980s and the 1990s, Hou hsiao Hsien was among the living my favorite film director. I remember the screening of Beiqing Chengshi (A City Of Sadness) 1990 at the Berlinale-Forum, the traumatic screening of Hsimeng Rensheng (The Puppet master) 1993 at the Montreal World Film festival with the most horrible audience you can imagine for a film where some shots last up to 6 minutes which didn´t detain me from giving the most hysteric applause I ever gave to a film during a festival. I remember also a retrospective of Taiwanese cinema 1996 in a Berlin cinema called Filmkunst 66. The credits of Haonan, Haonu (Good Men, Good Women) were just rolling and the owner of the film theater switched the light on. Even though still with tears in my eyes (because this is for me the most emotional film by Hou) I shouted at him something like: “Let the light out you idiot!” The last film by Hou I was enthusiastic about was Kohi Jikou (Cafe Lumiere) this wonderful homage to Yasujiro Ozu. His Zui Hao de shi guang (Three Times) left me cold even though the first two episodes belong to the finest things Hou ever did and this film is an excellent introduction to the films of Hou Hsiao Hsien. Le Voyage de Ballon Rouge from 2007 was really the only film by Hou Hsiao Hsien which disappointed me and it was for 8 years the last long feature by Hou. Since 2006 my cinephile life turned from a Hou dominated era to a Malick-dominated era and just recently I saw Nie Yin Niang, a period film with Martial arts elements, Hou´s most expensive film with a long and difficult time of production. Interestingly Hou´s studies on Taiwanese history in his great trilogy, his autobiographical masterpiece Tong Nien Wang shi (A Time To Live and time to die) or in Hai Shang Hua (The Flowers Of Shanghai) went always with a search for his own definition of cinema and finally with the cultivation of his unique style.
A period film is in fact nothing which should surprise us if it comes from Hou Hsiao Hsien, because most of his finest films were period films even though much less engrossed through time.
What Hsimeng Rensheng (which begins almost with the the time when cinema was born) already foreclosed especially with a remarkable lightning of interiors, what he continued in the second episode of Zui Hao de shi guang, a silent film leads finally to the lightning in Nie Yin Niang. In the cinema of the West, we learned from Stanley Kubrick´s Barry Lyndon and Terrence Malick´s The New World that the light can be a key to approach a cinematic reconstruction of a far distant epoch of history and it is astonishing that more than 25 years after this daring and experiment with light John Ford did with She Wore A Yellow Ribbon this brave approach was not continued before Barry Lyndon.

Even though Nie Yin Niang begins with sequences in Black and White (most of the film is shot in a format very close to the Academy format excerpt one single scene appears in the 1,85 Format), the film is first of all an excellent colour film with Red, Yellow and Gold tones I haven´t seen for quite a while.
One of the many currents which can be seen in Hou´s work is the dynamic between people who are suffering under history but who are also observing and analyzing what history has made of them. The chronicler in Beiqing Chengshi, Haonan, Haonu, Nilzohe Nuer (Daughter Of The Nile) are women, the real puppetmaster Li Tien Lu in Hsimeng Rensheng appears in documentary moments side by side with Hou´s staged scenes from the pippeteer´s biography. Annie Shizuka-Inoh in her double role in Haonan, Haonu plays Chiang Bi-yu, a resistance fighter against the Japanese who invaded China but also an actress from the present who prepares herself for playing in a mysterious film this very Chiang Bi-yu.
Nie Yinniang in Nie Yin Niang is a full skilled assassin, exiled as a child and trained by nuns as a martial arts fighter is one of these protagonists in Hou´s work who suffer under history but who also begins to analyze it and who finally makes decisions against the direction of her so-called predestined fate. At the beginning we see her fulfilling an order to kill a man. There is hardly any expression on the face of Shu Qi, this actress who worked with Hou Hsiao Hsien since 2001. At the beginning she appears in a black robe as the perfect killer machine and there is no sign of any emotion on her face. Much later when she learns from the nuns more about her history she cries. That will be the only time when we see an emotional reaction from her. What she finally thinks and feels, the film offers only very small hints for that. It is a bit like a historian who knows a lot about historical events but naturally very few about individual biographies. Even though Hou prefers extremely long shots, his narration became since Beiqing Chengshi more and more fragmental. Often he isolates one scene from the other through slow fading outs. He stresses the attention of the audience but finally rewards them with a certain kind of beauty which made him to a singularity in contemporary Chinese cinema. No reason to panic if you feel a bit or even very disoriented at the beginning. Piece by piece a comprehensive understanding will follow. The beauty of this film is encrypted and you have to do a lot to find your orientation and finally you realize that it was worth it. Yin Niang gets a final order, to kill a man she once loved as a young girl, the reason for this assassination is political and for fulfilling this order she has to be this functional perfect killer. First she observes her victim and we, the audience with her. There are incredible long shots where we see the man she is supposed to kill behind thin and almost transparent curtains in the diffuse light of candles and oil lamps. A lot of the scenes, especially when we see powerful people spin their intrigues take place in closed interiors. The open air scenes always are like a release from these muggy interiors.
Like always in Hou´s films there is an exciting dynamic between movement and statics. The few but very precise dosed martial art scenes, a well choreographed dance in the palace or people who are walking through the landscape and than sometimes extremely slow moments where almost nothing moves, people who are almost frozen in their movements, landscapes where you have to look twice to recognize the movement of the water. Sometimes only the wind which goes through the trees is the only evidence of movement.

To watch a film by Hou Hsiao Hsien is very often like watching the elements of which cinema consists are coming together. We can be sure that Hou like Kubrick for Barry Lyndon studied a lot of paintings from or about the epoch the film is dealing with. But it goes far beyond just reproducing old paintings, it gives for moments the uncanny hint of visual culture of a far distant time centuries before you could get an image about nearly everything, if in cinema, television or Internet. In these films like Nie Yin Niang, Barry Lyndon and of course The New World, the cinematic apparatus is first of all an artificial time machine. The time revealed in front of our eyes might be strange and very engrossed but for some moments and especially in this strangeness we have a key to an epoch lost in time.

What we learn about the protagonists and especially about this female assassin remains fragmental. Moments of rising empathy will disappear at the end. We get glimpses of things and people which do not exist anymore.

At the end, Yin Niang finally decides not to kill the man she once loved and leaves for a new chapter in her life, the perfect functioning killer who is discovering her own humanity goes her own way.
As a matter of fact, some of Hou´s final shots are in themselves pure cinematic masterpieces, the ending scene of Beiqing Chengshi, Hsimeng Rensheng, Haonan, Haonu and now in Nie Yin Niang. Hou has an extraordinary sense how to leave a film, a sense for the transition of the things he reveals in his films and our reality outside the screening his films. In Nie Yin Niang we see a group of people on their departure, including Ying Niang. We hear already a mesmerizing music and the picture lasts for a small eternity until the landscape is totally deserted by any person, than the first credits and finally the and the black of the final credits. appears. The last moments of a film by Hou Hsiao Hsien are probably some of the most ceremonially moments cinema has to offer. These moments when the fiction totally disappears, we are alone with the monstrous beauty of this film and paradoxically and despite we often like to categorize Hou as a minimalist these last moments have always an uncanny impact on me. One thing for sure, Hou Hsiao Hsien is back with his finest film since Kohi Jikou.