Notes on I Used to be Darker by Mathew Porterfield, USA: 2013 -Berlin Filmfestival 2013-I. 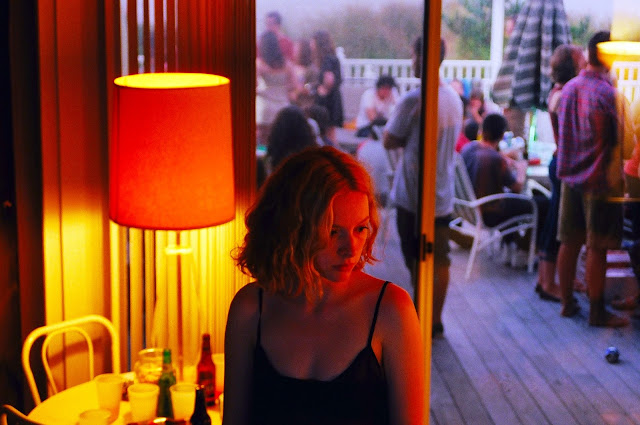 
There are films which leave you for the first moments after the screening speechless. Just a few hours after I have seen a film like I used to be Darker by Mathew Porterfield, I will fail to articulate in words what I have seen and what I have experienced. It is like with films by Eric Rohmer, Mikio Naruse, some films by Rufolf Thome or Yasujiro Ozu, Film in which seemingly very few happens but the mind is so full of images, impressions – sometimes only short moments.
First of all you have to take home all these impressions in your mind, impressions which are not yet translated into terms, words , not to mention opinions.

Films like I used to be Darker seem to be made by itself.
The plot of this film seems nothing else than a set up of situations on which the characters have to react , have to live with it.
The situation is about this: A young Irish Girl (Taryn), stranded in America visits her aunt Kim and her cousin Abby in Baltimore. But she drops just in when Kim is in the process of a separation from her husband Ned.
I do not really “know” what the persons feel. There are hints.
Abby does n´t talk with her mother Kim (a folk singer) who moved out and lives together with members of her band. Taryn is probably disturbed because she is a runaway and her only family in this strange country is her aunt who is just separated and her cousin.

These hints, the film gives us about its characters are like cinematic Haikus.
In one scene Ned, the husband suffering under the separation from Kim is singing alone an elegy on his lost love. Later he smashes his guitar in anger.

Kim who suffers because she feels rejected by her daughter gives a concert with her band. The song she performs is called “American Child” and it is sung (or at least I imagine) with a special fervency like she put all her emotions in this song.
How do I describe this moment without being able to sing the song, Kim has sung?

Abby, Ned´s and Kim´s daughter finds at the internet an old video from her father, performing a folk song with a harmonica. In this old video he can hardly be recognized as the Ned of the present.
When Taryn and Kim are talking about Taryn´s mother (Kim´s sister who”was a punk”) we get small hints of the history of the characters, not enough to put the finger on but more than enough to imagine or to dream yourself in the world this films offers. When Taryn and Kim open an old foto album, we are not seeing all the old pictures Taryn and Kim see.

Did I say, almost nothing happened in this film? Maybe I am totally wrong and there is happening too much in this 90 minutes. I didn´t realize it at the first moment neither did I realize it just after the screening. Just a few hours later, my head is still full of all these small but wonderful moments the films has given to me.
Sometimes you just need a Haiku and you feel that the world is rotating around itself and around the sun.

I remember the rooms the characters occupied and I remember even the cat in Kim´s house. We see the cat very seldom but it is always there. A lot of things about the characters and the world they live in we do not know, we just feel it is all there. Sometimes we feel that strange presence through hints, sometimes we feel that it is hidden in the memories of these characters, hidden in their sorrow their anger their tenderness.
At the end, Kim is alone , plays her guitar and sings the song “These days..”
A magic moment which evokes in me again one of these “Haiku-scenes” in the films by Yasujiro Ozu. We are aware that this wonderful will finish without answering all our questions.
Oh, these films.
The last moment with Kim singing a song just for herself and giving us the privilege to share it with us. How shall I describe it without being able to sing this song?

The compacted 90 minutes of this film just begin to unfold itself. The more I recall certain moments of this wonderful piece of cinema in my mind, the more beauty I discover.
I am not yet finished with this film, I just got a hint that I am in love with it.

Posted by shomingeki at 8:47 AM No comments: