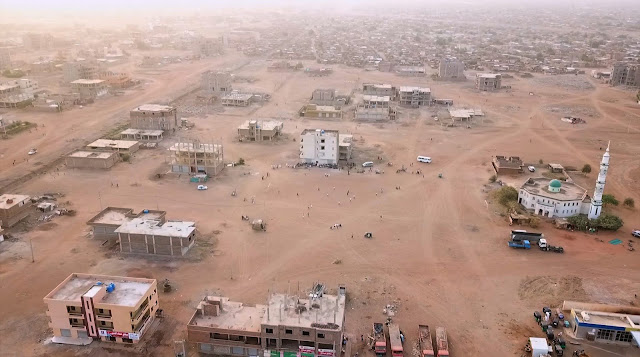 The filmmaker visits her native country, Sudan, a country where she has actually never lived. Born in Saudi Arabia and later grown up in Egypt. Sudan is for her something like the unknown home country. Consequently the film is a cinematic travelogue. It consists of interviews with different women and observations but it is also a personal reflection how her life had been if she had grown up in this very country. First of all, she appears as a stranger in her native country.
Most of the women she meets, are enthusiastic about football. One of them dreams about building up a national ladies football team. As Sudan is a member of the Fifa, it is officially still not allowed for women to play football. Each training unit, each game is a fight against this stupid restriction. Marwa Zein is very close to her protagonists, their dreams their and their resistance against a patriarchal culture. Her images are actually images which are officially oppressed. Sometimes films are not only revealing a diversity, they themselves contribute to it.
She accompanies these women during training, some matches and moments when women are mostly among women. She records their enthusiasm and their ability to form companionship under very oppressive conditions. While ladies football is becoming more and more established in other countries, in Sudan it is still a sub culture. The resistance against this restriction caused by religion, state and male dominated culture is not yet an open battle but the idea of a change is imaginable.

Sometimes cinema has this ability to offer images from other cultures which are totally ignored or totally oppressed. In other words – cinema can often offer images hidden in an oppressed diversity.

In my now a bit disillusioned, once very romantic idea about film festivals as a place of cinematic and cultural diversity as its most important meaning, the film reminds me a bit what I was looking for all these years in film festivals.

Between watching these women playing football, talking to each other or expressing their dreams and hopes, there is a moment when the film reminds us that there is still a long way to these women's freedom and self determination. Once we see a hole in the wall of a house. Sunlight breaks through this hole and and changes the light into a shining golden shade. The light finds its way through a tiny hole and it is a good metaphor for this film. It is an abstract poetic moment in this mostly sober but compassionate film. As a survey, the film comes to rather sober conclusions. The women are still isolated not only by their country´s restriction but as well by the indifference of the Fifa which even appears as more distorted than it is already. But Marwa Zein creates literally space for this women, an imagined albeit small zone of freedom and self determination where they can unfold themselves. The seedling for change is small and frail, but it still begins to grow.

Posted by shomingeki at 9:15 AM No comments: