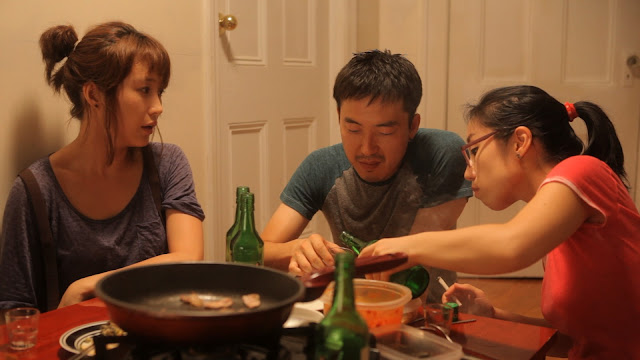 The film , the young Korean woman Soohyun wants to make exists only as a  provisional  script or how the French would say – it is not realized yet. Feature Movie, the finished film we see is about the beginning of a making of a film which is still invisible captured in the head of Soohyun.
When she talks with friends or people who probably will be involved in this film project, all she gets as a reaction is scepticism. From some friends she gets advices how to promote her film which isn´t yet born.
All we know is that she is a film student in New York “who wants to proof something to herself”
The finished film we see is in another kind also about scepticism, a scepticism about all what one learns at a film school about plot, about drama. The film in the head of Soohyun is still protected against all the conventions, compromises or all pragmatism.
Feature Movie is also a film about a piece of the world not yet captured, condensed and transformed into a film. Finally Feature Movie a film by Juhui Kwon from the early 21. Century evokes in me the idea of the world before Cinema as a technical invention was born. In this sense minimalism is not just avoiding or resisting but it can also be a journey on the search for a very personal vision of cinema.

We see fragments of Soohyuns every day life in New York, when she meets friends or  reworks her screenplay. Feature Movie is also about the many “real films” around us. Some of them might inspire her, some not.
In the episodic structure of the finished film we see, we experience the paradox of seemingly accidental events and on the other hand the the feeling that this structure is intended. Both films, the visible we just see and the invisible imagined by Soo-hyun correspondent with each other.
Even though the fact that every film is made as soon as it is recorded, Juhui Kwon´s film reminds me in a sentence from Wim Wenders Ozu-homage Tokyo-ga: “If one could film like that; just seeing without the pressure to proof something.”

The fragmentary, seemingly loose and almost invisible narrative structure seems to avoid forming a story out of these single events. But as the film avoids a plot it offers many options how a plot or finally a story could look like.
As the characters in this film talk often about film and other arts, Feature Movie opens to glimpses of the world, landscapes, buildings from a concrete geographical part of the world and the presence of people which keep a strange independence from the limited time of the film or the limits of the framed images. The frames of the images capture them for a moment and releases them soon after the scene is finished.

We hear Soohyun´s diary -like over voice, evident as the voice of a person who tries to get along with the life around her and her inner thoughts and feelings. We see the urban landscape of this big American City but seen from the point of view of a Korean who is a stranger here. Most people from Soohyuns social environment we see are Koreans like her And when her conversations are not about Cinema than about her past in Korea. The landscape of New York we see and the landscape of Korea which remains invisible in this film and almost as captured in the heads of the persons like Soohyun´s film is hidden in her mind. Cinema has always to do with defining or re-defining our place in the universe among all the eternal options life offers.

I remember so much tiring discussions about Reality and Cinema, like for example the often misunderstood thoughts by André Bazin about cinematic realism as a blind confidence in the “objectivity” of the image-making apparatus of cinema.
Juhui Kwon´s film seems to suggest a mistrust in this dogma of the “objectivity” of the recording apparatus but a confidence in human experiences with or without Cinema. It is as well a film about the old dream to make films which gives justice to both; the part of the world which is filmed and the individual which is filming.

Earlier in the film, Soohyun meets an assistant director for music videos she wants probably involve in her project. But this meeting is quite discouraging. No story, not even a budget, the assistant director thinks it is impossible. And he says further: “You can´t make a film just because you want to.”
The irony is that the finished film by Juhui Kwon we see looks really like a film which is made, “just because Juhui Kwon wanted to make it.”

At a Korean barbecue evening with friends and after having some drinks, Soohyun talks about that she doesn´t want to be put in any category. They shall let her “do what she wants to do”
Even though the film deals with a frustration of a woman who wants to make a film and who still has to overcome a lot of obstacles, Feature Movie, the real and finished film we just see, is encouraging and refreshing. As lightly as the films seems, it touches profound questions about the world and the Cinema.

Films are not made to answer all our questions but for enriching our experiences. Juhui Kwon and her character Soohyun are not just students of cinema who find their answers in the rich history of more than 115 years Cinema. They also want to be explorer  of Cinema and their own experiences with it on a search for their own vision of Cinema based on their own experiences, experiences one can not learn at school or from books alone.
Not only for this reason, Feature Movie is in all its modesty a very wise film.

Posted by shomingeki at 6:09 PM No comments: