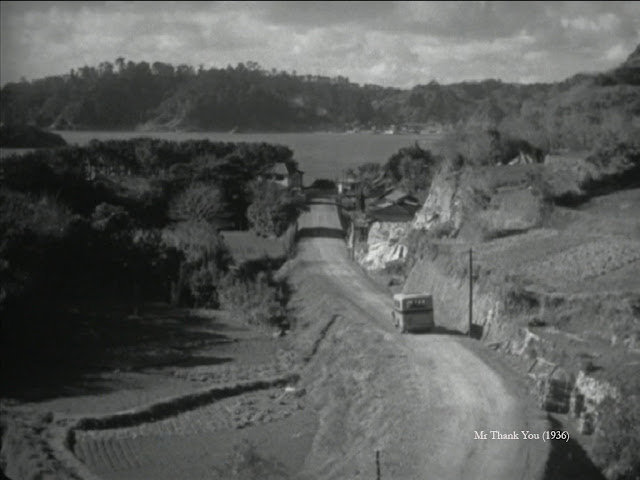 Arigato means “Thank you”. I this film they call a bus- Mr. Thank you because he bus-driver to everybody who goes out of his way - if people or chicken. Arigato-san is a rediscovering from 1936. It is not easy to have access to japanese films from this period. Unfortunately, most of films by more or less famous directors are lost or destroyed. To be able at all to see such a film like Arigato-san is a special gift, a piece of rediscovered Atlantis. It was the japanese film historian Tadao Sato who recommended this film to the International Forum of young Cinema (this film was shown in a special serial called “Rediscovered” and was a tribute to 100 years cinema 1995, RT)

Hiroshi Shimizu (1903-1966),  a director of the shomingeki-genre  is hardly known in Germany, a genre which deals only with ordinary people and everyday-situations. Arigato-san is a film without a clear recognizable plot. Its narration or its chain of episodes goes almost analog to a bus trip which shows very different people (exactly just like the persons from each other know) for a limited time stuck together. We got about the driver and the very different characters not more and less what is possible in such a limited time. There are no dramatic moments but only the landscapes. The films seems to be like an extreme focused excerpt of that what we could call a story.
Even the humor which results from the encounters of such different characters who has to react on each other comes from a very precise observation. Comical situations are not developing from the directors fantasy but from that what is existing. His attitude to his characters is full of love and irony but never denunciating. An employer, real petty-bourgeois is peeping a young girl and is nagging always.
A young woman is chatting always to the driver in whom she is seemingly interested. Beside so much, they are talking about the economic crisis and the “talkies” how they call the firsts sound-films which are shown in the big cities. This bus is in a very concrete sense a piece of the world, a very small planet in the universe.

Just the (inevitable) strictment of the passing of time on the imagined time of the length of the film through the montage and the loveable arranged images remind us that every impression of spontaneity or natural effect is not less a result of an artistic decision than the expressive-emphatic cinema. It is impossible to offer a synopsis. It may be easier to make a protocol of every shot. But Nevertheless we got the idea  of the incredible facets on which human lives are consist  and that in the incredible short time of just 75 minutes: Waiting passengers at the bus stop. We got some fragments like through zoom and microphone where the people want to go or where they come from. For moments we realise the individual worries and wishes which disappear later again in the anonymity of a bus trip.

The bus drives on badly build streets through mountain landscapes and small villages. Shimizu, it is called, loved shooting under the heaven and preferred real locations instead of studios. The landscapes which we and the passengers see passing by offer a little geography of a country which consists mostly of mountains. It is like in the film History Lessons by Jean-Marie Straub and Daniele Huillet which offered a little geography of the streets in Rome.
This small bus in the middle of the landscape that existed much before it seems to me a very sympathetic and modest definition of cinema: Sometimes we see the bus driving through the landscape, in other moments we see the landscape from the interiors of the bus and this outer landscape is now framed through the windows of the bus.

During the trip they offer to each other sweets and strong liqueur is drunken. The episodes are not slaves of a story but they evoke in our imagination a lot of possible stories. Once they make a break in the middle of a countryside. They leave the bus for moving a bit. Suddenly a short shot of the heaven where a the clouds are moving. Nothing is more touching in cinema than the thins which are present.

The driver meets a bit later a korean girl who has to left her village. Her father has dies. She asks him, who passes by regularly through this village for taking care of the flowers on her fathers grave. He offers her to give her a lift but she refuses for walking together with her compatriots. Japanese censors cut a scene which showed directly the extreme poverty of koreans who lived in Japan. But it didn't attach the precise point of view of Shimizu very much.

The fragmentary gives us an idea of a whole life. Encounters and separating. Accidental encounters of people who will be soon separated. The permanent flow of /life-) times. Action and contemplation. It seems that the world blesses every banal event with poetry just as a thank for Shimizu for his attention. Someone is saying in the film: The road is only 80 kilometres long, but a lot is happen here.” There are moments in this films (even made independent from each other in the same time), that Arigato-san seems to be the japanese pendant to Jean Renoir´s  Une Partie de Campagne.

I am almost sure to have dreamt this film once before.
Rüdiger Tomczak
(translated from shomingeki No. 1, November 1995)

Posted by shomingeki at 4:01 PM No comments: