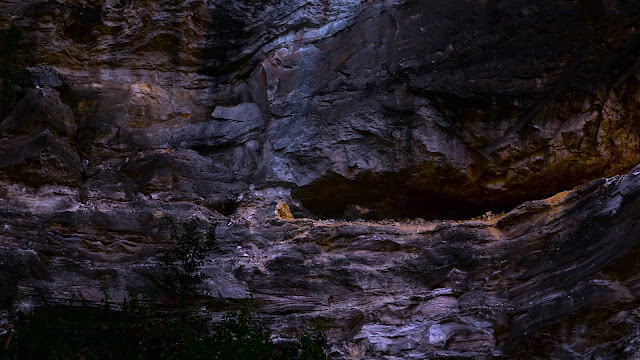 Maybe films which are dealing with the genesis or the formation of the world and with the origin of mankind have always to do with the history of cinema.
Rang Mahal begins with a mountain landscape. We see the matter as old as the birth of our planet. An over voice narrator recites the genesis of the world how it is passed on by the tribe Santal from their mythology. The Santal belong to the natives of the Indian sub continent. It is about the creation of all matter, the beginning of life and finally the origin of men. The film reveals at the beginning natural landscape which is later modified by human civilization. Sometimes, we recognize in the midst of this wild and breathtaking beautiful landscape small paths made by men. Sometimes a few paintings are showed.
As the images show what is, the matter, the text based on a myth which is always an interpretation of the world. It is fascinating how text and images have its own life independent from each other but they finally appear as two possibilities to understand the world. In it´s balance of text and image, Rang Mahal is a close relative of these seemingly very different films like Marguerite Duras´Les Mains Negatives (The negative hands) or Terrence Malick´s Voyage of Time – A Life´s Journey. All these films move between two different poles of cinema, the first one is the ability of cinema to reveal the material world, the second pole is to evoke something or which stimulates our imagination.

As the film proceeds more and more signs of civilization appear, a man working with the soil or a cyclist. The natural landscape turns partly into a landscape cultivated by men. A roof of these houses is based on the structure of a fish skeleton. Power poles are visible in this seemingly almost untouched landscape. In some moments this film has something of a lost dream. The relationship between mankind and nature seems still intact. A world is conceivable where mankind lives in accordance with nature instead of exploiting it.

First of all, this is a very rigorous film about the diversity of cinema between reproducing images of the world and the storytelling, between realism and poetry. The idea of cinema actually began ages ago before our common era when humans began to form what we call civilization and communities. The old cave paintings are probably the origin of cinema.

In all it´s wisdom, in all it´s artistic decisions, Rang Mahal still gives space for this primary, and yes - for my sake - even naive joy in seeing images and to be absorbed by stories. And images are what this film offers quite a lot: Children, animals the incredible landscapes, the beautiful paintings of houses and rooms. In more than one aspect it is a film which reminds us why we love cinematic images.
Than, sentences from this over-voice recitation like, “After all, we all are part of the creator´s dream”, or, “We all are part of cosmic history”.

Rang Mahal is not only an invitation to see very exquisite images from an endangered culture, it is as well a crystal clear film about the Seeing itself.
Even though Prantik Basu cultivates a kind of formal strictness, it is a film you can watch and breathe freely. That it is free of any dogmatism is evident in this implicitness the film presents a peaceful co-existence of the things which are what they are and the things which are evoked through imagination.

The glory of cinema – it can also be found in this short and beautiful gem Rang Mahal by Prantik Basu.

Posted by shomingeki at 11:32 AM No comments: