Like a lost Paradise of Cinema - on Laila aur Sett Geet (The shepherdess and the seven songs) by Pushpendra Singh, India: 2020, BerlinFilmfestival VI.-Encounters 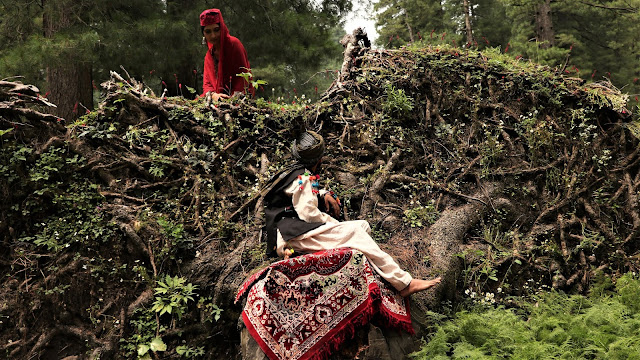 Pushpendra Singh is both, a modern stylist of young Indian cinema with a tendency to minimalism but his films have as well a certain opulence and this reminds us that cinema will be thought and made for the big screen or it is condemned to die.
Like Lajwanti, Laila aur Sett Geet is based on a folk tale, an adaption of the writer Vljaidan Detha. And like Lajwanti and his autobiographical inspired Ashwatthama, Singh´s new film invites us again to dive deep into a traditional culture. The female characters in Lajwanti and in his most recent film played by Sanghmitra Hitaishi or Navjot Randhawa as Laila are deeply rooted in their culture but in their pride, intelligence and independence they appear as well as modern and self-assured woman with a tendency to rebel. The character of Laila is based on a 14th Century mystic poetess from Kashmir called Lal Ded, an independent women loved and respected by Muslims and Hindus in Kashmir likewise for nearly 700 years.

Like I mentioned, in his restrained style Singh seems to be closer to filmmaker like Straub and Huillet, Mani Kaul or Hou Hsiao hsien. But in his celebration of the visible, perceivable world his films includes often moments of breathtaking beauty like for example in one of the most mesmerizing colour film ever made, Renoir´s The River and herewith an aura of a lost paradise of cinema.

The film is structured in 7 songs like in chapters, they paraphrase Laila´s inner change which is as well evident in her voiceover comments. At the beginning there is a wedding ceremony of a nomadic tribe called Bakarwal. Laila is supposed to be married with a shepherd whose community will move soon to another place .This community seems be protected by the trees they are surrounded by, but as well by the framed image of world on the mighty big screen. It has the fleeting beauty of a world which either will vanish soon or has already gone. When Laila´s Bakarwal-community moves to another forest, they face new problems. Authorities demand documents, proofs of identity and family relations which were never needed in this traditional community. It is a small hint to India´s present troubles. The rich and complex diversity of so much different cultures is threatened. A policeman, obsessed by the beauty of the quick-witted Laila tries to harass her. But Laila refuses to become a victim. If necessary, when she is threatened, she is able to strike back. Her voiceover monologues reveal her reflections and her search for a place in this world as an individual.
Pushpendra Singh does not just present this culture and this people alien to me, he reveals as well their reflections about themselves, the dynamics between belonging to a community and moments of objection. More important than the image we have of them is that we notice their own images about themselves. That is explicit especially in the female characters of Singhs films. To approach these people and their world we have to sing along with them.

A visual key in the film is the wonderful light of cinematographer Ranabir Das. The films seems to be made entirely in natural light or with traditional light sources like oil lamps. Our eyes see the world how it is revealed in this film with the eyes of the protagonists: the dark nights when nothing else is visible than the fire place and the hardly recognizable schemes of the people, the sunlight shining though the greenery of the forest, a dawn and a sky of slight violet tone, the beautiful diverse colours of dresses, blankets or interiors. There are often shots from the interiors of a house. One part of the image remains almost hidden in the half-light of the room and another part leads to the light which shines through the entrance.

I can´t forget the tenderness of Laila towards her sheep and the sounds she uses to communicate with them. From time to time one of these animals, a sheep or a goat is sacrificed. The killing of an animal is never revealed in this film, only suggested by the soundtrack. The beauty of this film does not seem wanted or constructed, it originates from our willingness to adopt what the film and its protagonists share with us. What seems so alien to me at the beginning, turns soon into a paradisiac vision of cinema.And despite Singh´s tendency to reduction, his cinematic approach of the world he reveals for us has indeed an intensity like a film by Terrence Malick.
We are what and how we see. And finally - to use a metaphor of this film - we feel like we have to get rid of our clothes like Laila, searching in the middle of Kashmir for a new definition of our place in the world.

In my euphoria, I like to call this film a celebration of cinema with all its glory in a world where both is endangered, our civilization and the cinema likewise. But there is also – like so often at this year´s Berlinale-edition- the longing to see the world again like a child with all the unbiasedness and the unresisted readiness to be enchanted.

The last shot (I do not want to reveal it for now), is one of these moments where all my passion and love for cinema seems to have an image in these dammed achingly beautiful last seconds. And I feel like a little child which points a finger at a glimpse of beauty to call attention. After last fade out into the darkness of the ending credits, I am not more than a crying child which has to be sung by A lullaby into sleep.
I can´t remember when was the last time one could see 4 excellent Indian films in four different sections at this film festival and especially the selection Laila aur Satt Geet the new masterpiece by Pushpendra Singh proofed that Indian cinema deserves a distinguished place in the International cinema. 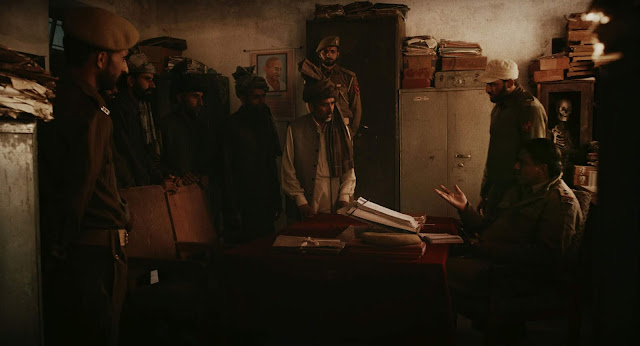 Posted by shomingeki at 8:20 PM No comments: