Notes on THE BRIDGES OF MADISON COUNTY by Clint Eastwood Berlin Filmfestival XI. 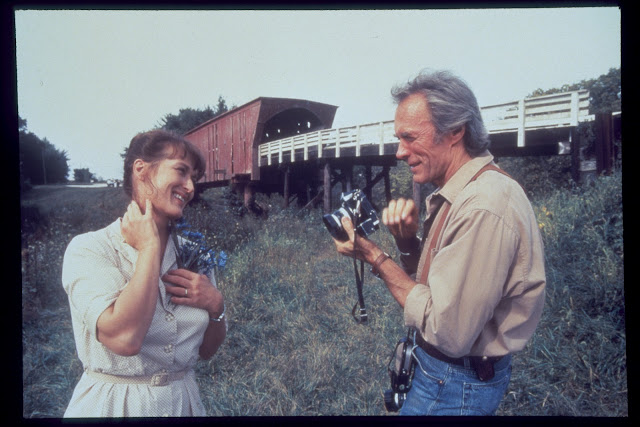 (Hommage Meryl Streep)
Clint Eastwood was 65, Meryl Streep 45. We can be sure that there must have been some people in the industry who thought Eastwood is ready for retirement and at all - a love story between a man in his mid sixties and a woman of 45 must be a commercial disaster. Finally the film was both, a big success and artistic one if not Clint Eastwood´s finest film at all.
On one side a film in the best tradition of American cinematic story telling, on the other hand as engrossed and beautiful like for example Keisuke Kinoshita´s masterpiece SHE WAS LIKE A WILD CRYSANTHEMUM. Further a film where its characters are in a process of permanent development. At the beginning the children of the dead Francesca reading her diary and at the beginning they are disturbed how her records reveals her love life, a 3 days long affair with a photographer. They are digging in Francesca  room and at the beginning the children already in their early forties seem like invaders in the intimate world of Francesca. The second level are flashbacks. One of the miracles is how the 45 years old Streep can perform both, an middle aged frustrated house wife, immigrated once from Italy turns into a blooming loving girl like she tries to live for a last time the youth she never really had. How Eastwood plants his characters in a very concrete landscape, how he reveals an American small town with its coziness but as well with its mean gossip, how the production design reveals such a strong feeling for presence and absence of the characters, and last but not least Eastwood´s and Streep´s wonderful performances - everything in this film seems on the right place. It is a summer film and at the same time it is a film about a last summer of love. There is also an analogy between Francesca´s grown up children who learn about their mother´s long hidden feelings and desires and the audience. A good film always tells about experiences.
THE BRIDGES OF MADISON COUNTY, made by a director, mostly known as an actor in and a director for action packed films, made a kind of an American shomingeki film.
And like typical for a shomingeki film, in this love story between man and wife there is total justice between the desires and feelings of both. As well rather a Japanese than an American sensibility, THE BRIDGES OF MADISON COUNTY was my access to Clint Eastwood as a director.  How he managed to develop from an almost less than mediocre actor into one of the last great story tellers of American cinema will remains a secret for me.
Posted by shomingeki at 12:31 PM No comments: