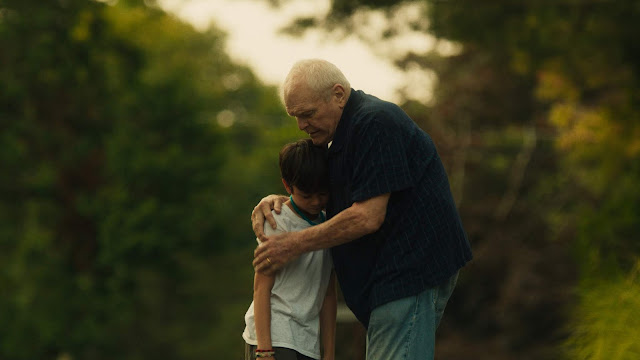 Driveways is as well a film about cleaning out. In its literally meaning it is about cleaning out the house of a deceased person but it is also about cleaning out the troubled soul for facing the future or for coming to terms with the own life.
The film is also about the crossing of different path of life. One path is very close to its end, the other is halfway on this path, another just begins.
Kathy, an Asian-American woman (Hong Chau) and her 8 years old son Cody are on a road trip to the house of her elder sister who just passed away. The sisters lost contact for many years.The house has to be cleaned out for selling it. When they arrive, electricity is switched off and the house is full packed with things, most of them look like junk. It is one of these heartbreaking moments everyone experiences in life. Things, souvenirs etc. loose the meaning when its owner is no more, they are disconnected from a soul who has gone. What we learn about the story of Cody and Cathy, we learn only through small hints. We encounter them here and now. Kathy is a troubled woman, troubled by her difficult relationship with the deceased sister and probably by men. Once she phones with a man, a boyfriend or even Cody´s father – we do not know for sure. Cody is a sensitive but frightened boy. For mother and son, the future is a catalogue of questions, how to make a living for her and the child, where to live, to sell the inherited house or not. Cody encounters the old neighbour Del, a military veteran played by the wonderful Brian Dennehy who is still warm in my memory after his performance in Terrence Malick´s Knight of Cups. Their gradual approach belongs to the wonders of this film. Del still mourns the loss of his wife who passed away years ago and he develops very soon a friendship with the young boy. All those protagonists exist in the Here and Now but there is as well the almost phantasmal presence of their history and their identity as human beings whose complexity and lifetime appears as far beyond the 88 film minutes.
With other friends, Del plays bingo in a club for war veterans. Some of his pals show already signs of dementia. Soon Del has to leave his home because his daughter, a judge will take him to her house to take care of him. At the same time Cody and his mother are close to the decision to keep the house instead of selling it. The one has to leave his home, others are just close to find one.
Even though the film is also telling about abandoned houses, Driveways is a film I felt at home with just after the first minutes. Sometimes it looks like a Road Movie made by Ozu. Even though structured in every day episodes with a seeming lightness, there is a quite melancholic undertone of caducity. Andrew Ahn accomplishes a glimpse of eternity in a very subtle way and with heart warming compassion.

Driveways is at the same time a film about farewell. Two currents are crossing each other. A life path which is very close to its end and another one which just begins.
Life and Death are present and sometimes in the same shot. In house of the deceased aunt, the boy finds a corpse of a cat. When Cody says that he likes to visit Del in the faraway Seattle, the old man answers that it is a very long way there is the notion of Del´s death in the near future.

The porch is a transition between the public part of a house and the more private rooms. A lot of scenes take place on such a porch. It is near the end when on Del´s porch an incredible beautiful and moving scene will take place. Del tells about his late wife about his regrets in his long life. It is not just a very tender moment, the whole film becomes in such moments tenderness and compassion itself.

When Cody and Del are sitting in front of the door, we see them from behind and we follow their glances into the environment, the settlement surrounded by trees. It is a contemplative enchanting shot. We do not only see but we see also people who are looking at something like to an invisible screen. As they are framed it emphasizes also cinema as a fragment of what we call world. Driveways, this little miracle of Independent cinema celebrates life and cinema at the same time.


Posted by shomingeki at 7:47 PM No comments: