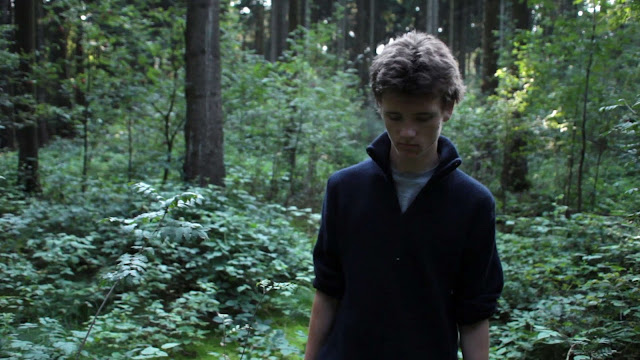 What was that, this strange but crazy and beautiful creature of a film?
One day after the screening I try to remember this film like I often try to recall a dream of last night which occupies my mind but I remain unable to tell it in words.

There is a forest (I often dream of forests), an aging couple who live reclusively in a house and a young man walking through the forest on the search for shelter. There is a young man singing on his electric guitar strange songs accompanied by  a red haired woman on the drums. Elements like notes, sketches for a story. They are waiting to be edited together. When these traces of a narration disappear for moments and the camera stops or makes and endless long travelling, an over voice narrator tells fragment of a story with hints to a family drama and a  post-apocalyptic science fiction novel. TV news pronounce the ban of certain kinds of vegetables and gives also a hint to a nuclear disaster.
The audience is at first an editor and finally also the story teller.
As Andreas Bolm said, the film has to do with the place in Northern Germany where he comes from it is another hint, another offering to read the film, to edit it for yourself.
The forest is a very complex and sensitive ecological system. So is Cinema. I have a soft spot for the endangered species like Malick, Straub (yes, yes the must be mentioned in one breath) and a lot more from countries which have seldom access to this neoliberal dominated Filmfestival, unless they accept the new neo-colonialism of Dieter Kosslick´s World Cinema Fund. In Cinema these endangered species are something like the extremely endangered Royal Bengali Tiger in India. And the neoliberalism like manifested in the ideology of this festival with their talent campus (imposing an industrial production of talents) is the equivalent of the hint radioactivity as a danger for men and nature in this film.
The young man on the guitar, played by Andreas Bolm himself sings defiant songs. And the film has something defiant as well.
But the young man who strays through the forest desperately looking for a place where he can live or survive is even a more beautiful image for the spirit of the film.
Those were the days when such films were shown at the International Forum as rare and unconsumed narrative or non-narrative cinematic forms, films which might not ne perfect, but films which does n´t fit in any categories. But they bring fresh wind.
The young man can not move into a house ready for occupancy, he has to build something, has to work which is again an image for what you have to do to find a place in this film where you can "live".
And another beautiful aspect of Die Wiedergänger is, he does n´t answer the dogma of a neoliberal ideology  - which built already metastases in nearly all parts of our culture -  with another dogma.
It is not one of this boring "smart" films from my country (I have seen one at the Forum) but a very lovable one.
The film does not want more than getting a place for itself and that's probably the only thing Andreas Bolm is insisting on.
The question of the future of Cinema is more or less concentrated in the defense of its diversity. Die Wiedergänger reminds us in this diversity.

The forest in Andreas Bolm´s film allow both, people who are living in a house. They have found a place. But it allows also people who are looking for a place. Another beautiful image for the richness of Cinema.

Rüdiger Tomczak
Posted by shomingeki at 11:06 AM No comments: