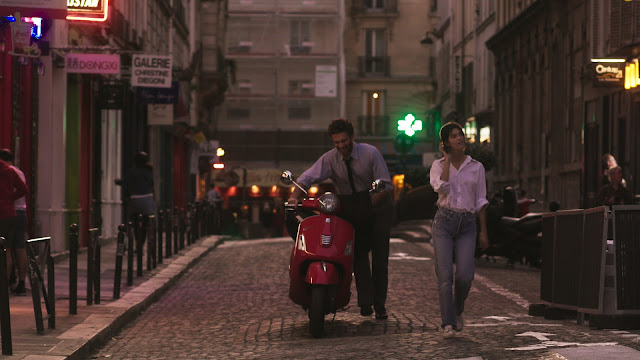 First of all, Seize Printemps was for me an unexpected gift of a film. I have seen it at this very weekend when the film theatres in my country reopened after a shutdown of 8 months. It was a Sunday and I wanted to see Chloé Zhao´s Nomadland again which left quite a strong but painful impression on me. At the same film theatres, Seize Printemps was shown and I could easily integrate it in my schedule. And I was lucky about that because one week later the film almost disappeared from the cinemas in Berlin except the german dubbed version. While Nomadland has to do with aging, loneliness, losses and the eternal search for a place in the world, Suzanne Lindon´s film has to do with another and more comfortable but also very intense feeling, this special feeling when one fells in love at a very young age. Now since the reopening of the cinemas, I have two films in my mind which won´t leave my me for quite a while.

Among so much what Seize Printemps is, it is as well another example of my beloved sub genre “Coming of Age” and here it is about a 16 years old girl´s love to a stage actor taking place between the end of childhood and the rite of passage. There is a strange somnambulistic balance between an often nearly minimalistic approach interwoven with fine dosed moments of pure cinematic magic.

What we see of the geography of Paris is mostly reduced to the places, Suzanne passes during her every day routine, the way from school to home, a few cafe´s and the apartment where she lives with her parents and her sister. Even the shy love story between Suzanne and a stage actor in his mid thirties originates literally from this every day geography: the old dusty theatre (where the actor Raphael works) is on the way she passes every day. If there is any trace of eroticism than rather in this strange harmony of their movements as in some shy kisses.

Strangely, smart phones or other technical hints to the 21. Century are hardly visible. And it is especially the film´s economy which causes moments of dreamlike beauty. There are some several dance scenes in this film, some of them part of the story and others appear as formalized cinematic movements. Once they sit in a café (a common or garden), Raphael, gives her the head phone of his mp3-player and they listen a vocal work of Vivaldi. As the music begins the move head, hands and their body totally synchronous. And suddenly this not too cozy café changes into a mythic cinema place. In these ritualized moments one comes to think of the universes of an Ozu or a Pialat but in its musicality I think as well of Demy or Ophuls – not to forget Olga Kurylenko´s chaplinesque dances in Malic´s masterpiece To the Wonder. There is a wonderful moment when Suzanne just walks on a street and suddenly she begins to dance. It is another of the fleeting moments (as fleeting as this love story itself) but only this moment alone makes me wish to watch the film again.

This strange balance between a certain sensitivity for every day moments changing into totally engrossed moments alone would have been enough to admire this first feature film of a very young filmmaker.

But it is especially the “Café-Vivaldi”-scene which does not leave my mind. The emotional impact it has on my mind is complex and exhausting like an endless loop in my memory. Technically it is this strange effect when we watch people on the screen who are totally absorbed by something like I am by the film. It is one of these cinematic miracles which allow me to be absorbed by what I see but at the same time I felt like I was travelling through my own life time. Just these intensity one listens music when one has fallen in love affected me a lot. Just the combination of feeling engrossed but at the same time time to feel alive and exactly at the right place and at the right time in the world, this film pointed with an uncanny but as well indescribable precision.

And of course, Seize Printemps (Lindon began to write the screenplay at the age of 15) is another wonderful example of autobiographic inspired “Caméra Stylo”, an aspect of cinema which occupied my mind a lot in the last 15 years especially in the films by Korean Yang Yonghi (whose four films deal entirely with her family story), the autobiographic inspired films by Terrence Malick or Anjan Dutt´s Dutta Vs Dutta. But interestingly, while Terrence Malick, Yang Yong-hi, Hou Hsiao Hsien or Anjan Dutt are dealing with their memories of the more or less far distant past, Suzanne Lindon´s memories or even childhood inspirations are like we say in Germany “still very warm”.

In several reviews of this film, the term lightness is used, sometimes as a compliment, sometimes slightly deprecatingly. The “lightness” is not so much in the subject like the German and the international title, Spring in Paris (Frühling in Paris) and Spring blossom) try to suggest, because adolescence or first love are anything else than simple. The “lightness” which attracts and enthuse me, is the lightness how a very young filmmaker moves freely through the history of cinema and how she makes at the same times something very personal.

Seize Printemps is a very special first feature in Cinemascope and nit should be seen on the big screen. If the film is not a big sign of hope for the future of cinema, what then?

Posted by shomingeki at 4:43 PM