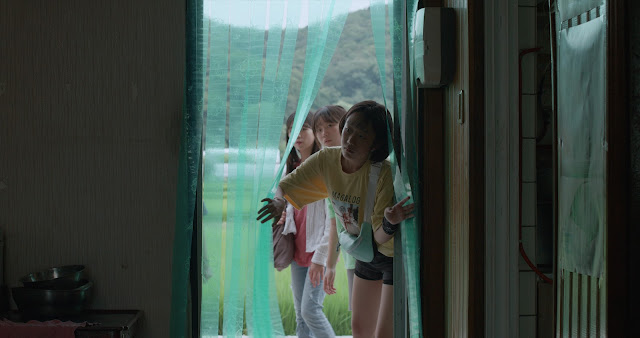 This is a film more from the experimental corner of the Generation-section. The narrative style is rather dealing with the outcomes of situations. But as no film is really completely plotless, the film nevertheless offers options of stories or at least fragments of them. Most of its time, the film celebrates a refreshing playfulness. Even some non events appear almost poetic. The film begins to move from a certain initiation point. A photography club of a middle school invites students to participate in a photo competition, the subject is “the end of the World”.

Before four 14 years old girls begin their journey on the search for images for this rather intangible subject, we see a film screening in this school. They screen John Ford´s Stagecoach, a film which is famous for its reestablishment of the Western-genre but it is probably more important – a model for a certain kind of this hybrid genre we call Road Movie.

As as hard as it is for now to define what Jong Chak Yeok is about, it has certainly Road Movie-elements. As it is hard for the girls to look for images according the the subject “end of the world”. They begin to travel with subways and local train to its final destinations. While they are philosophizing about what to imagine as “the end of the world”, they begin with things they know from their every day life. In the subways or local trains, the girls sit mostly side by side. One of them dozes off and the window shows the landscape passing by. While the girls sitting side by side flattens the image, the view out of the window above them suggests depth. The film has a seldom almost musical rhythm between movement and static between the illusion of depth and the emphasis of the natural flatness of the cinematic image. The film´s flow is often stopped to a still image and sometimes as sudden as an emergency brake. Even though the camera moves very seldom, the images are sometimes full of movement (last but not least by these vivid girls).

Finally the girls arrive a kind of no man´s land. Abandoned buildings and a retirement home where the dwellers are not visible. As we are still asking ourselves where the film is going, we are lost with the girls. The four girls are unable to find the way back or even to the nearest bus, or subway station. They have to spend the night in one of these abandoned buildings. It is dark and now the last battery of their smart phones has died.

The mood, or better the changes of moods in this film depends mostly on pure cinematic elements: light and darkness or it depends on things which happen uninfluenced by people like rain, sunshine day and night. The building where the girls have to spend the night is dark, their and our imagination is activated. It is almost a classical situation from the many films and novels taking place in a post apocalyptic world. The tone of their conversation becomes more serious. The girls still in transition between childhood and growing up talk about their grandmothers and soon their conversation is about aging and finally death.

With this film it is a bit like with particle physics: The seeming lack of stories changes into a strange charging of fragments of stories out of the seemingly emptiness. As the film appears at the beginning as light as a summer breeze it leads to a quite astonishing film experience. In another kind than the exuberant masterpiece of the obvious cinephile Alexandre Rockwell Sweet Thing (Generation 2020) but with the same love for cinema, Jong Chak Yeok is a wonderful introduction to the mysteries of cinema. In all its playfulness, its seemingly lightness, the film is in its formal strategies one of the bravest films I saw this year in this section which jumps often so wonderfully among the different potentials of cinema.

Posted by shomingeki at 5:07 PM