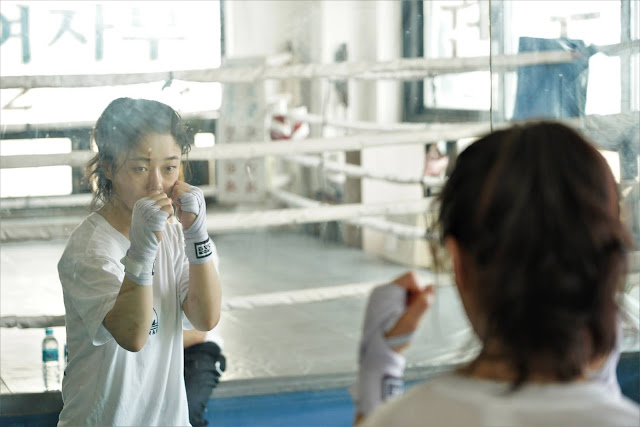 All around I see gilded lives,

but mine is tarnished.

All around I hear words of Jade,

but mine are luckless.

Why I was born under a bad star?

The film is mostly about every day events. Scene after scene it seems Jun celebrates an unexcitedly realism which is probably only possible in Eastasian cinema. As the film´s mise en scène seems to have all time in the world, the protagonist, Jina, a young woman who escaped from North Korea, has no time at all. She just arrives in Seoul after some months of social adjustment training. Her father is while escaping from North Korea stuck in China and it needs money to pass him through China. Her mother has abandoned her when she was 12 and lives here in Seoul with a new husband and another daughter. From the beginning, Jina appears as an alien lost soul in this strange new world. The world around her has its own rhythm, she herself is still on the search for her own rhythm of life.

Her alienation, her uprooting from her family and the country she has lived in is present in the first encounter with her mother after many years. She hardly recognizes her daughter. In the face of the young actress Lim Seong-mi, a lot of emotions are palpable. Her complex emotions are never described in words but remain nameless with a silent impact. Once we see sunshine on her beautiful but grim and sad face. One almost wishes to see her smile. In her indescribable intensity of her facial expressions, she almost reminds me in the young girl played by Sidney Flanigan in Eliza Hittman´s masterpiece Never Rarely Sometimes Always.

For a good part of the film, Jina is unable to fit in this new society or in finding new friends. Later when she joins later a box club for earning more money there is a young assistant and an alcohol addicted coach who feel some compassion for her. The coach himself appears like a lost soul himself. Like I mentioned, the film cultivates a sober realism with very few dramatic moments, but these rough nameless emotions perceptible in the face of the actress creates a strange intensity which rises more as the film proceeds its quiet and sober narration. Sometimes, the film retreats itself into basic cinematic moments, observations and the exchange of glances. The film I will remember afterwards, seems to be much more emotional than the one I have seen just now. Things we do not see might lead later in our imagination a life of its own. The film does not produce emotion, it arises them from the relationship between the film´s soberness and its unfortunate protagonist.

There is a moment when Jina cries secretly in the training hall, retreated in a dark corner of this building. While she is half hidden and appears as a weeping shadow, the coach encourages her to cry for feeling better afterwards. The whole weight of “drama” in this seemingly sober film is tricky. It remains often hidden and abstract. But from time to time these often hidden emotions unfold an unexpected fierceness like unforeseen seismic shocks if one just try to recall single moments of this film.

After one boxing match, Jina has some slight injuries in her face despite of her protection suit. They are superficial and probably harmless. But strangely this superficial injury unfolds as an image of a deeply wounded soul. It might be as well the essence of this film which always deals with the surface of the material things and people but for moments it is exactly this patient observation and the lack of imposed emotions which turns out to be the film´s compassion.

The Asian cinema has taught us that simplicity can be be one of the highest and most sophisticated cinematic art. The film Fighter by Jéro Yun might even has a slight tendency to cinematic minimalism. But finally turns out to be a heartbreaking film experience. The echo the film has left in me will stay for quite a while.

Posted by shomingeki at 3:47 PM