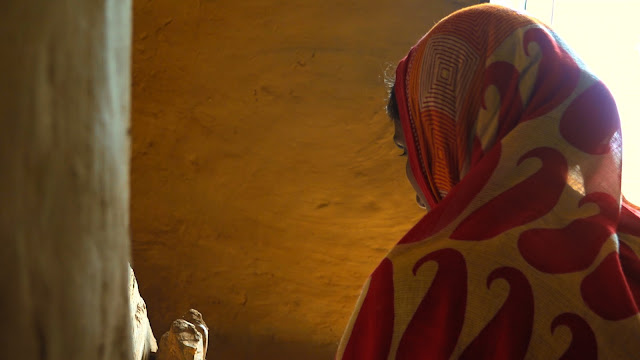 Even though I saw Prantik Basu´s new documentary Bela as a press screener, my first thought was how wonderful this film would look on the big screen.
One reason for this thought was a simple but in retrospect very strong visual impression which enfolds almost cinema in general: The film´s point of view is mostly down to earth but from time to time the film is gazing towards the sky.
The film is about indigenous communities in the east of West Bengal. At first it offers first an insight into a specific rural culture. But this “Down to earth” does not exclude the thing we call poetry. In his wonderful short film Rang Mahal, Basu confronted the materiality of natural and men-made landscapes with a recited indigenous genesis. That reminded me in films like Malick´s Voyage of Time- Life´s Journey but also in Marguerite Duras´ Les Maines Negatives (The negative Hands), because it distinguishes the world like it is and how people interpret it through religion, mythology or poetry.
In Bela, there is no voice over commentary. At first the film looks at the every day work routine of this community: the home work of women, the collecting of fire wood or the grinding of grain. But there is also the preparation for some special events, a Cchau-festival (a tribal folk dance) and the Diwali festival. We see Cchau-dancer at their rehearsals. Even the struggle to preserve an old traditional culture appears as hard work. Later the Cchau dancer will be dressed up and masked like mythic figures or animals for their performance.
Women are grinding grain. Their work is tiring and dusty. The mill is a primitive apparatus entirely powered by muscles. This moment might be only a fragment of this tribal way of life but the rhythm of this monotonous work which is necessary for surviving offers an idea of this life.
Women pick up fire wood in the forest. Big trucks are transporting wood for industrial purposes. The daily work routine revealed in this film has nothing euphemistic. These women are mostly grumpy, stressed and not at all happy with their daily work. They might be absorbed by the world they live in but they are not necessarily satisfied with it.
As I mentioned Prantik Basu´s fine eye in distinguishing natural and cultural landscapes, in Bela he also distinguishes the two elements of cinema, it´s precise image-making apparatus which enables to record images of the world like it is but also the moment when these seemingly sober recorded images become something else - a poetic interpretation of the world. The incorruptible persistent gaze itself becomes the artistic approach.
Basu works mostly with the light sources these indigenous people have at their disposal. Especially in the interiors of these traditional houses, our eyes have to adapt this dim light where some things is visible but others are hidden in the shadow. For the eyes of a city dweller it is first of all challenging, because our eyes are mostly spoiled by the light pollution in the big cities.
When Ford, Kubrick or Malick for example tried to approach a distant epochs with the disclaiming of conventional studio lightning, Basu or in another kind the Taiwanese Hou hsiao Hsien tried to approach an authentic lightning for traditional interiors. Basu approaches here a traditional way of life with an authentic lightning. It is not only another evidence that Bela is not made for a TV channel but also a brave and sophisticated esthetic approach for a documentary.
The complex relationships between nature and culture, a traditional tribal way of life and traces of a rising industry, between the work for surviving and the cultural events as the collective memory of indigenous culture – even the relationships between the genders are revealed entirely through this very persistent cinematic observation. The world unfolds image by image and the use of this image-making apparatus is often decent, sometimes even invisible.
The art of Prantik Basu seems to be rather in resisting to force the images. Paradoxically, Bela looks like great cinematic art just because of his imperturbable confidence in his images. Despite or even because of Basu´s seemingly formal restraint, the whole film seems to abound with fragmented stories, moods, thoughts and feelings.
Near the end there is the Cchau-festival and the Diwali celebration. And the film which I almost would like to call minimalistic with a certain formal strictness - seems now to explode into myriads of lights, colors and movements.
Women paint white ornaments on the ground with colour made from rice flour. We see firework, oil lamps and even electric lights in many colours. The film almost becomes a festival itself and its psychedelic beauty reminds me as well in films like Renoir´s The River. But even here it looks like art originates directly in front of the camera from the world itself. The ornaments might be washed away by the next rain, oil lamps, fireworks and even the electric lights will expire soon but it is like burnt in the artificial memory of this film like it is burnt in my own biological memory.
The film Bela offers a lot of options. One can reflect a lot about what the film reveals, one can reflect a lot about documentary as an art form. Films were often dealing with vanishing worlds and vanishing cultures. It is quite a bitter pill that film itself is endangered like never before in its history of crisis. Not only for that reason, Bela is a kind of gift which gives a glimpse about the richness and diversity of the past of cinema but also hope for cinematic wonders yet to come.
Rüdiger Tomczak
Bela had its world premiere at the Visions du Reel, International Filmfestival in Nyon /Switzerland.
Posted by shomingeki at 2:26 PM