Notes on Ghawre Bairey Aaj (The Home and the World Today) by Aparna Sen, India: 2019 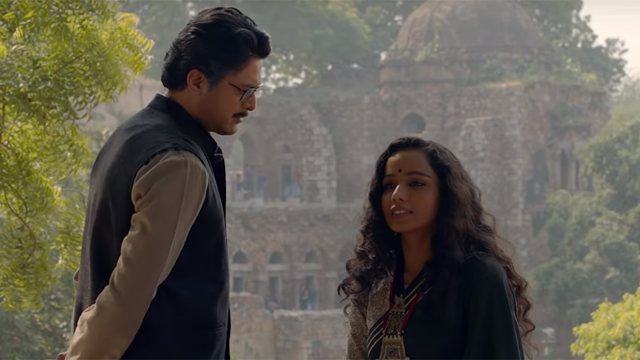 ‘To shoot a film is to organise an entire universe’. (Ingmar Bergmann)

To enjoy or at least to appreciate a film by Aparna Sen, one has to look for the often hidden layers under the surface, in short words – one has to understand the cinematic universe of Aparna Sen as a multidimensional one. The obvious surface of her films always stand in a relationship to the hidden layers. One of the best examples is for me still Mr. And Mrs. Iyer. At the first sight a very simple story but after several watchings it almost appears to me as her most abstract film and among so much other things it is probably the re-invention of the Road Movie at the beginning of the 21th century.

Ghawre Bairey Aaj is her adaptation of Rabindranath Tagore´s famous novel The Home and the World,already 1984 adapted by Satyajit Ray). Like with her “Romeo and Julia” adaptation from Shakespeare, Aparna Sen places the novel into contemporary India. The nationalistic “Svedashi-movement of the beginning of the 20th. Century is here replaced by the pseudo Hindu and fundamentalistic movement caused by the governing party BJP in India (which is never mentioned), an ultra right wing party with para-military cadres, a gang of thugs influenced by the Fascism movement of the 1920s and 1930s like for example Hitler´s SA. Their aggressions are especially against Muslims and other minorities but also against Indians from lower castes and women.
As well interesting are her modifications of the three main characters of Tagore´s novel which is as well one of the most fascinating triangle relationships in world literature. The Maharaja Nikhilesh (Anirban Bhattacharya)is here the left-liberal chief editor of an online magazine called India Today, his friend since childhood Sandip (Jisshu Sengupta) has changed from a leftish radical activist into a right wing activist propagating Hindu fundamentalism and Brinda (Tuhina Das), Nikhilesh´s wife is a Dalit, a tribal girl who came as the granddaughter of a servant into Nikilesh´s family. Later she finally was married with him. Even though converted to the educated Indian middle class, Brinda´s roots (her parents were coalminers)are in the Indian working class.

As far to the film´s obvious reference to India´s presence. Aparna Sen does not even try to encrypt this reference. Sandip is a man with a mask, his evilness is hidden behind the mask of a seducer and he is right between Mozart´s Don Giovanni and these masculine devils we know from some films by Erich von Stroheim.
The direct and unfiltered political aspect of the film is important. All who know a bit of Aparna Sen´s work as an activist from her involvement in the protest movement against the Nandigram massacres or her present opposition against the present political current of intolerance and violence in India, have noticed as well that she is often verbal attacked in social networks and that very often by right wing followers.
Aparna Sen´s motivations are less from a predetermined ideological point of view but rather what we call in Germany “gesunder Menschenverstand” vaguely translated with a “healthy human mind”. I imagine she is a bit like Nikhilesh´s teacher Professor Mitra (played by the wonderful Anjan Dutt). In a arguement with Sandip he says that Hinduism is quite a noble philosophy, why he wants to “talibanize” it?

Except the opening and closing, the film´s narrative structure appears for now as clear and simple. The scenes taking place in the presence are coloured, the flashbacks and memories in Black and White. But very soon these seemingly simple element begin to move into a spiraling virtuosity.

Ghawre Bairey Aaj is as well mostly a chamber piece. Except some excursions of Brinda and Sandip and Nikhilesh´s long trip to a tribal village for promoting the building of a hospital for the village people, most scenes are captured in the interiors of the house. Even though taking rather place in the “Home”, the “World” is always perceptible, it begins on the terrace, behind a curtain, behind the entrance door.
Even though Aparna Sen remains close to Tagore´s narrative style to illuminate equally the motivations of the three main characters, I think there is a slight focusing on Brinda. As she is relatively uninvolved in the ideological dispute between Sandip and Nikhilesh, she seems to be more in contact with her history. And there is an important flashback, when Brinda as a young girl and now orphaned brought from her village into the wealthy house. What Sandip called sarcastically the “brahminization of a tribal girl” is for the child a painful uprooting. The child which does not want to sit on the table is one of the most heartbreaking moments in the film and it is important for Brinda´s further development as a character. While Sandip and Nikhilesh are arguing from their ideological place in the world, Brinda is always looking for a place she can call home, looking for a point of view where she proof these predetermined ideologies.

When she is finally involved in a sexual relationship with Sandip, she is less the seduced one but it is for her a welcomed self experiment to find ther place in the world. It happens with a certain innocence, neither adultery nor the intention to betray or hurt her husband. She just follows an understandable longing but with the wrong person.

Brinda´s confession to Nikhilesh and the following reconcilation is another unforgettable moment. It is a chamber scene with the intensity of a Mozart-Da Ponte-opera. It is a heartbreaking moment of tenderness between a couple despite they have lost completely any trace of romantic love. But under this eloquent and music-like scene, there are emotions as naked and truthfully like we find only in the films by Ritwik Ghatak or Terrence Malick.

This can happen often when I watch a film by Aparna Sen: Often and much to fast one thinks one has looked through the story, or the structure. But this feeling of my preeminence as a spectator does not last long and it will be always lead ad absurdum and there remains always the insight that the wisdom of her films subdues me. It is not easy to put the finger on the brilliancy of her films.

Neel Dutt´s score is almost like a fourth person invisible but strangely perceptible. It is like a strange phantom-like being which is contrary to the three main characters not bound by space and time. More than in any other films by Aparna Sen, Dutt´s score might hint to the melancholy of a failed marriage, a dying friendship but it remains as well an independent agent, a mysterious matter in this universe. And sometimes the music in its elegiac tone has something of the remains of these Proustian beings of time, the beings we were once in these different phases of our life. While the characters often remember their past, Sandip to his former left radical actions, Sandip and Nikhilesh in their common past and Nikhilesh´s early love or Brinda in her past as a poor village girl, the music seems always referring to past, presence and future at the same time. Neel Dutt´s music and how it is integrated in the film´s soundtrack presents the other side of this film, the more abstract and poetic side of Aparna Sen beside the bleak parable about contemporary India.

Ghawre Bairey Aaj is as well a film about disconnections, the one between the close friends, but also between what they were once and what they are today. There is a moment with an uncanny double exposure. Close to the intense finale of the film, there appears like a phantom the little girl Brinda was once. This now disembodied being goes through Brinda´s adult Self like a neutron through matter and disappears finally.. The connection between Brinda and the girl she once was is suspended. Brinda becomes a second time uprooted and homeless.

The more the film moves to its end the more it becomes a bitter poem about how to feel home less in a culture where you originated from. It is a bit like the American John Ford in Two Rode together (one of the sharpest film on American racism)or the episode Civil War in How the West was one, The last film Jean Renoir made in France before his exile La Regle du Jeu, Ozus bleakest film Tokyo Boshoku (Tokyo Twilight) or the Kolkata trilogy of Satyajit Ray.

Three people are murdered in this film, The first, a young Muslim gay is killed by a squad of Hindu-fundamentalist, the second is a political murder of an intellectual and the last one is one out of revenge. Nikhilesh´s study was always present in this film. With its full packed book shelves, it is like an image for the wisdom, this diversity of philosophy, science and poetry it seems like the stored knowledge of a several thousand years old culture. Now it is converted into a mortuary.

After the last murder, the soundtrack becomes distorted, the movements slow down and one feels like in an event horizon of a Black Hole. Tuhina Das´s beautiful face becomes like stone, without any trace of life. The whole circle of the film is closed The end is not less apocalyptic like Aparna Sen´s Yugant, These last images leave in its consequence a long and painful echo. The world goes apart and this very special sophisticated Laterna Magica of Aparna Sen´s cinema ceases to move.

Fear, anger worries and sadness about the world, in this case her country India is always present in the films by Aparna Sen. Despite that, I am sure, Aparna Sen loves cinema like other cinephile film directors of her generation like Wim Wenders or Martin Scorsese do. The re-discovering of all the diversity of cinema, I owe Aparna Sen, when I discovered her films for myself 15 years ago. Her films are often moving between incredible beauty especially in her her Mr. And Mrs. Iyer and The Japanese Wife (beauty in cinema has for me often something of a lost paradise) and often bleak heavy nightmares about the world today. About my relationship with her films which can fascinate and destress me likewise, a very special scene from Robert Zemeckys´ science fiction film Contact comes to my mind: When the astrophysicist Elli Arroway (Jodie Foster) makes this trip in a multidimensional ship, she encounters an Alien in the shape of her late father. And he says to her that you (Mankind) are very lonely but a remarkable specie, capable to incredible beautiful dreams but as well to such horrible nightmares. 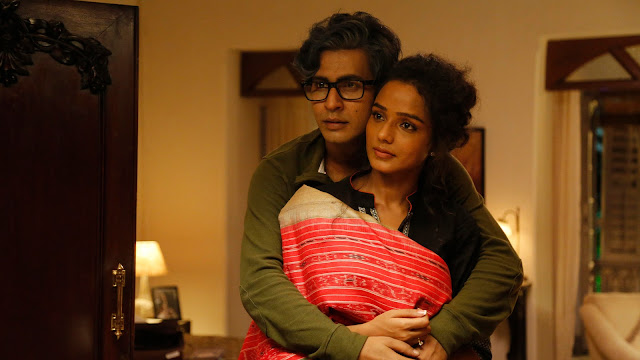 Posted by shomingeki at 4:59 PM No comments: