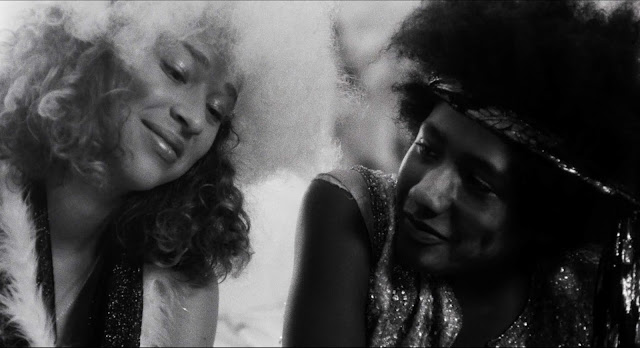 And I will stroll the merry way
And jump the hedges first
And I will drink the clear
Clean water for to quench my thirst (Sweet Thing, Van Morrison)

Considering the synopsis in the festival catalogue, I did not really expect that this film can make me happy.
The adolescent girl Billie (they named her after Billie Holiday) lives together with her little brother Nico and her alcohol addict father. The mother left them and lives with another man. Yes, it really sounds like a colportage and one of these social dramas about the poorest class. But very soon, one learns that the film is made by a man who is deeply in love with cinema, and this love is boundless. Billie, Nico and their friend Malik might live on the edge between poverty and total waywardness. But after a while, we learn that Rockwell´s film is at all a protected zone, filled with fairytale-like wonders. The film´s Black and White images, (except some dream,- or memory moments are coloured) shields these kids. Billie and Nico- by the way – are played by Rockwells own children Lana and Nico Rockwell.

Sometimes it is a bit like Hansel and Gretel until the new friend Malik (hard to believe this name is accidental) crossed their way and helps them to deal with their abandoning mother the mother´s lover who is abusing the kids and the mother likewise. The father is kind hearted but totally lost in his addiction. He finally goes to a hospital for a withdrawal treatment. The kids are now abandoned by their loved ones.

The film is filled with quotations from different film genres: horror, film noir, action, slapstick – and yes as well a bit of Italian Neorealism. Yes, and there is also a cinematic greeting to Terrence Malick´s Badlands. But like a shield, most of the violence in these genres are blocked like by a shield. And Rockwells play with quotations, cliches is more than refreshing and never tiring. Sweet Thing is not as much a film but like we dream a film for ourself composed of so many films we fell for. And this declaration of love for cinema is very virulent and I could not hesitate to fell for his film.

Despite the film deals with characters whose life is at the edges of society, the film never wallows itself in the kids misery. The director is here as well the adventurous but loving father who invites his children (and us) through a tour through the realm of cinema. I was not sure at the beginning, but after a while I was confident that I leave the film theatre much happier than I entered it. The only thing I was never sure about is – if this is a film or am I just dreaming.
Yes, it is a homage to cinema and Billie Holiday – but as well to one of the most beautiful songs of the 1960s, Sweet Thing by Van Morrison from his legendary album Astral Weeks, which I listen for more than 40 years.What a joy to hear this wonderful song at the first time in a film! When Billie/Lana Rockwell covers this song several times in this film, I am literally in heaven.
The film takes place around Christmas time and indeed it has quite a cluster of little gifts to offer and with a big lucky bag, the film is probably described in the best way. It is almost defiant how all this evil like racism, social injustice just rebounds from the protection shield against all evil the film finally is.
I attended the world premiere at the Urania in Berlin which was full packed and the screening was in the sense of another song by Van Morrison literally a “Healing Game.” Cinema as a collective and in this case joyful experience – that is during the Berlin Filmfestival only possible in this Generation-section. How else should we celebrate Sweet Thing by Alexandre Rockwell than with a song by Van Morrison or Billie Holiday.