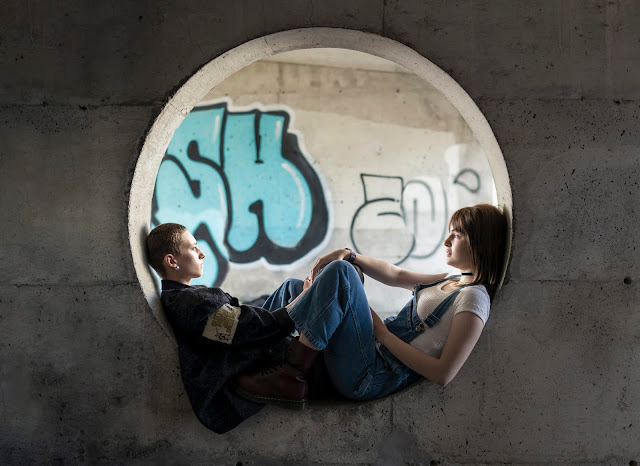 Like Indian cinema, the “Cinéma Québecois” is another highly neglected film region which is given almost regularly space by this wonderful festival section.
At the beginning, I totally forgot that the film takes place in the 1990s, the time when I visited Quebec very frequently, connected to this francophone region through several friendships. Just this beautiful French-Canadian accent brings always back some memories. The 1990s was as well the time of some referendums for the Independence of Québec from the Canadian union. The turbulent history of Northern America´s only francophone province caused a lot of of insecurity especially among young people. Some of the friends I had were only a few years older than the protagonists in this film, just one generation away from these young people in the film.

The main character Cat, a teenage girl goes through a turbulent change. Her parents are going to divorce. And family, often in films and stories a place of protection is here in decay. She looks for protection and shelter in her circle of friends – and unfortunately in the excessive use of drugs. I am not sure at what place the film takes place, but I would suggest it is one of the smaller cities outside the big urban areas of Montréal or Québec City. The amazing breathtaking landscape appears relatively seldom in the images of this film, they seem to be faded out from the film and probably as well from the awareness of the young protagonists. Sometimes they resemble hamsters in the rat race. They try to free themselves as well from the expectations the mostly dysfunctional parents have in them. They try to replace the need for shelter or the need to leave this “rat race with drugs. But drugs consumes their young and wild life energy, and if not it turns into a destructive power and even more isolation from the world around them, this world they do no seem to see or want to deal with. In their actions, parties, music, sex and drugs, their bodies appear as force fields. Even though there are a few moments in which I had wished a bit less voyeurism – Lavalette finds often very intense images for that. Sometimes bodies are clamped at each other in lust, tenderness or ecstasy. There are a few moments of rough violence like in a beating scene between Cat and another girl.
The camera is mostly very close and sometimes it reveals a tangle of blurring shapes and colours, an interesting and non human cinematic perception. The film becomes a too fast rotating Laterna Magica always in danger to be overheated and always in danger to bust. In these moments we perceive the bodies of these young people rather as a spectacular cosmic event with all its chemical and physical reactions. The film often emphasizes the movement of the film between revealing the young peoples enormous power but also their fragility.

Cat is a bit like Ruth in François Delisle´s film (Ruth, 1994) who is also full of rough and untamed energy but who is at the same time frail.
The poetic title “Goddess of the Fireflies” seems to have something to do with a last desperate shining before the end, if a human life or another natural event. When the film has extended its cinematic energy, a deep melancholy is all what remains. The very popular song Voyage, Voyage by Desireless (which used to go on my nerves) is here covered in a very slow and very melancholic version, the pop song is almost altered into a requiem. No film, Rithy Panh´s apocalyptic masterpiece Irradiés included, at this year´s Berlinale left me with such an amount of exhaustion and sadness. Lavalette´s film is neither beautiful, not always very eloquent - but it makes up for this with an emotional power and an aching sincerity.