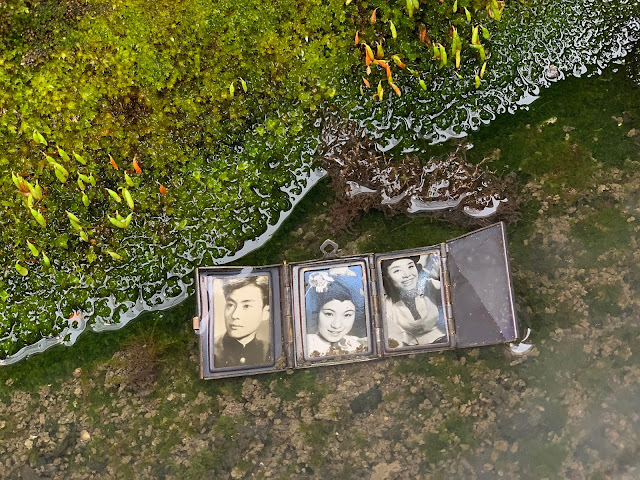 At the first sight, the new film by Rithy Panh seems to be his most abstract work, rather a film essay than a documentary. Among so much other things, the film is a triptych, the cinema scope format is divided in three frames. The three frames reveal mostly archive footage of the most barbaric events of the 20th. Century. Some critics compared it with an art installation. I prefer to call it a reversion of the technics used in Abel Gance´s Napoleon or the short lived Cinerama-format invented to make cinema even more spectacular. In Panh´s film, this triptych is a flickering, disturbing flood of images. It is not about the wonders of cinema, but its hell. Mostly poetic texts are spoken as voice over. The relationship between text and image reminds me in some films by Marguerite Duras or Jean-Luc Godard.
tried to shake the images away like a nightmare. But when I close my eyes, I still feel the images are still there just waiting to come back to my mind in the most displeasing moment.

The history of mankind especially the 20th. Century is revealed as an accumulation of genocide, wars and the increasing perfection of weapons, especially bombs, from the poisoned gas in world war I to the nuclear bombs in Hiroshima. Vivisections and experiments with always more “perfect” tools for mass killings. There are permanent cross-fadings between the very specific genocides of the German Holocaust, the Cambodian Genocide, the first atomic bombs or the area-wide shellfire in the American-Vietnamese war or other bombings during world war II. Opposite to some reviews on this film – I am sure that Panh understands the specific differences of these different genocides and mass killings. The common link between them is what Panh calls an abstractness of evil: the extinction of a whole city at the push of a button of a pilot, the frenzied fussy bureaucracy of the Nazis in the extermination camps.
It is an evil which literally wants the people dead. And Rithy Panh knows exactly about what he is telling about. The corps, bones and skulls of the victims of German concentration camps or Cambodian death camps are shown. Sometimes only ashes is left as human remains. Panh´s film tells about the contempt towards human life but as well about the annihilation of identities, whole families where no one is left to remember the dead. If something is left than a name on a list.

Sometimes we see a solar eruption, an amount of energy which can destroy the whole earth. It is a natural event which was imitated by man for no other reason than destruction.
It is true, Irradiés is a film on the limit of what and how one can reveal this horror in a film, of what and how ist still bearable for the spectator. But behind this composition of images and sounds, behind the archive footage and its artistic reworking – there remains something unfathomable.
We see a Butoh-dancer with a ghostly painted face like an exemplary ghost among the uncountable victims. The dead remain silent, some of them are already forgotten. Only through imagination the film can give them a voice.
Before we can judge or criticize this film as an imposition, we have to accept that this dark and often apocalyptic vision is a poem of pain and horror by a filmmaker who was very close to become one these nameless victims. Rithy Panh had a lot of talks with survivors of different genocides, if Cambodians or Holocaust survivors. One of them was director, scriptwriter and actress Mrs. Marceline Loridan (1928-2018), a Holocaust survivor and the wife of late Joris Ivens. They all encouraged Rithy Panh with his film project.

Like Ritwik Ghatak and Patricio Guzman, Rithy Panh is a filmmaker whose work is dealing with history he has suffered himself. For Ghatak it was the partition of Bengal which remained a personal trauma until his death, Guzman could escape the Pinochet-regime only by a hair while a lot of his loved ones and friends where tortured and killed. Panh himself witnessed his whole family dying in one of these death camps and only with luck he could escape as a teenager to Thailand. These filmmaker are also telling about the profound personal sufferings under their history. One of Panh´s most personal films, L´Image manquante is as well his most autobiographic film. With Irradiés he tried to put this specific trauma of Cambodian history in the context of the darkest chapters in the 20th. Century.

In this sense, Irradiés is not a cinematic imposition but the survey of a deeply injured soul and a brave confrontation with the darkest chapters of human civilization. Panh´s cinematic point of view is one which points out the importance cinema as a collective memory, that includes both, the personal memory in the loved ones he has lost but also in the “abstract evil” of the genocides in the 20th. Century. The fact that there are still deniers of these different genocides confirms the importance of this “collective memory”.

And yes, the film is hard to bear and yes, the film can cause pain and nightmares but it should be appreciated as an important work of mourning and an accomplishment of historic traumata. With this film Panh shares a lot with us and even challenges our empathy with less than 90 minutes. With the films by Rithy Panh we either learn to see history from the perspective of the victims or we do not understand history at all.

Posted by shomingeki at 2:08 PM