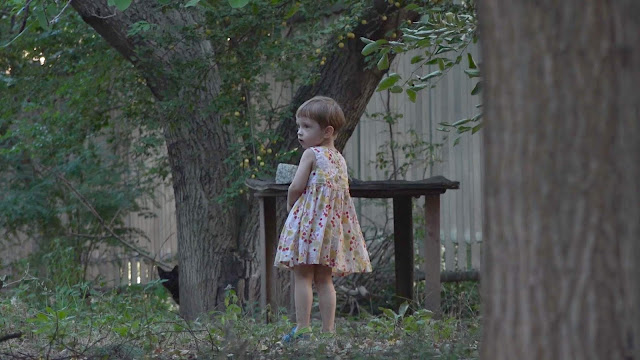 The opening titles are rolling over paintings about children. In one of them two children are walking and playing with a dog, in another one a child is looking up to the sky where birds are flying.
At the first sight this seems to be a radical restrained film. It seems the camera is reduced to its function to record, in this case a 3 year old baby girl named Zhana who is playing around on warm summer days. The environment is a Bulgarian housing estate which must have seen better times. Signs of decay are hard to ignore. For now it seems that the magic of the film is just caused by what happens in front of the camera. But soon we get aware that this seemingly sober artless documentary observation, this radical self-effacing is paradoxically the key to the film´s delicate poetry. And after a few moments it does not appear anymore just as an observing documentary of a playing child but it adapts the point of view of a kid, this specific fascination for the moment but as well the abrupt distraction when the kid discovers something else which absorbs its attention. Before we are really aware of it – the film changes our position as a spectator who is entertained by a funny and cute kid into the child we once were. It evokes memories of my own childhood. We sometimes literally are what we see on the screen.
And as the screen becomes almost like a mirror, we remember the little injuries we got while playing, the scratches on arms or knees or stings of mosquitoes and other insects. But we remember also the pleasure of walking barefoot on warm summer days or jumping into puddles. And we remember the feeling when we petted a cat or another animal. Time seemed to be an infinite universe.

As not many adults appear in Gumiela´s film, the proportions of the world around Zhana is explicit seen from a little kid´s point of view. Some of her friends who are a few years older and much bigger appear to her almost as giants. The housing estate with its playgrounds and back yards appear as an endless landscape where a lot is yet to discover. And the film which I thought was supposed to be a sober observing documentary appears to me now as a nearly dreamlike vision. It is like we travelled by a time machine to the very beginning of our life.
There is a moment when the child looks up into the sky and suddenly she pauses for a moment like she is absorbed be her own daydreaming. This is a moment which is hard to describe: the art of capturing the right moment at the right time, the opening of the film to the beauty of the world, the art of montage in discovering this very moment – or just and simple what we call “the magic of cinema”?

While we are diving in the point of view of a child, this very special perception of world, there is a moment like an awakening from a dream: The kids disappear through one of this many entrances of this housing estate. For a short while it is absolute quiet and there is nothing than the deserted back yard and the houses. It is a breathtaking Ozu-like moment and for the first time in this film we feel the fleetingness of time.
When this magical 55 film minutes are over, I think that Polina Gumiela´s Ochite Mi Sini, Rokjlata Sharena deals as well with one of the oldest dreams since the invention of cinema, to look for and sense the world with the freedom and innocence of a child. And the history of cinema is full packed with filmmakers who tried to explore the world while inspired by their own childhood memories.
I can´t believe that I was very close to overlook this little gem while making my festival schedule - and like so often a strange intuition lead me to the screening yesterday where the film had its world premiere. This gem of a documentary has quite a range between the modesty and the minimalism of an Yasujiro Ozu but in its consequence, it celebrates the glory of life as well like a film by Terrence Malick or Jean Renoir.