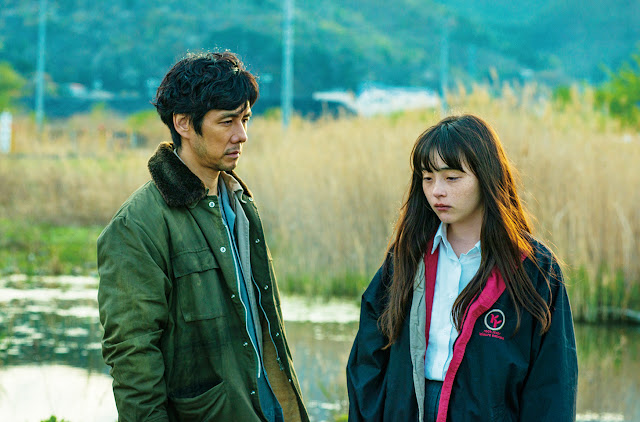 The 16 years old girl Haru appears as the loneliest human being in the world, a lost soul. And at the beginning of the film, she might just feel like that about herself too.
In the Japanese disaster year 2011, her brother and her parents were killed by a Tsunami. Now she lives at her aunt´s place. The first scene takes place in a very small kitchen. The camera persists in a certain almost static position. It is morning and like so often in Japanese cinema, the opening of a film begins with an every day situation. Breakfast is prepared, Haru has to go to her high school. But from the first minute on, the film tells as well about the difficulty to find back one´s way into domestic life in the process of mourning. Suwass sequences are very long and extreme slow. The action, each movement is prolongated.The whole film is built with patient and precise observations.
When the aunt gets very sick, Haru is literally homeless for a while. As a runaway she makes a long journey and the film turns into a Road Movie. By hitchhiking, Haru is beginning a journey away from Hiroshima to Fukushima.

When I saw this long, slow and incredible sad film from the first row in a film theatre, I thought how important it is to see such films not only on the big screen but as well in a public place. As I thought this, the film becomes even more elegiac. Haru encounters several people who helped her moving forwards. Except a couple (the woman is high pregnant and they expect with joy the Newborn), all the other people Haru meets during her journey have to deal themselves with mourning, losses and the painful difficulty to find their way back into life: a man whose sister committed suicide and who lives with his senile mother: a man who lost his wife and children during a landslide and a Kurdish refugee family whose father is detained by the immigration office and probably sent back to his country. Haru learns to share her grief with others. If it does not ease her pain, it helps her to find the way back into life.
That is cinema, this big screen which deals with our fears, losses, mourning and hopes and yes - this is another hint why Japanese cinema especially in its two great epoch of the 1930s and 1950s is the most cultivated cinema culture in this world. So much of these films can tell about life and the world and at the same time they reflect the mystery of cinema.
Gently and smooth, the film accompanies Haru on her difficult journey. She is only one time in really danger when some drunken youngsters try to harass her.

Later she meets a young boy who tells her about a disconnected phone booth where “people can talk with their late family members. This phone booth refers to the literal translation of the film title. Now she goes with the boy who wants to talk with his father (who died during an accident) to this phone cell. After the boy it is Haru´s turn. It is a very long monologue, an imagined talk with her parents and brother. The whole screen becomes this phone booth during this long and intense sequence. This phone booth is real and has giving comfort to ten thousands of people who lost their beloved ones. This phone booth is both, a real thing on a real place in a datable time integrated in the film´s fiction – but it is also a metaphor for cinema. And like so often, a film can be the cinematic pendant to a requiem, the history of cinema is full of that, if in fictive films, documentaries or in autobiographic inspired films. That goes from Hiroshi Shimizu, Yasujiro Ozu to Terrence Malick, Hou Hsiao Hsien, Anjan Dutt, Rithy Panh, Patricio Guzman to mention just a few.
And it is one of the most essential elements of cinema where we can understand our personal grief as an important part of human civilization.
Films like Kaze no Denwa by Nobuhiro Suwa belong to a film festival because they remember us that cinema is one of the most important public places for what we call collective memories or collective consciousness which helps us to define or re-define our place in the world.