Notes on A Hidden Life by Terrence Malick, Germany/USA: 2019

For my Indian friends

“I am convinced that it is still best that I speak the truth, even if it costs me my life. For you will not find it written in any of the commandments of God or of the Church that a man is obliged under pain of sin to take an oath committing him to obey whatever might be commanded of him by his secular ruler.”
(Franz Jägerstätter,Berlin, 1943)


This is Terrence Malick´s first film based on reliable historic sources which are not yet blurred by myth or insufficient past on written records. The is almost entirely made in English language. The film is about the tragedy of the Austrian farmer Franz Jägerstätter who refuses to join Hitler´s army and who is imprisoned for that and executed in 1943.
There was a lot of talk about the role of the English language inn a film mostly cast with German speaking actors. Strangely the use of English in a film which was supposed to be entirely in German language did not irritate me as much as I expected. It even worked very well in the voice overs but one has to get a bit used to the dialogs. Only some background phrases are audible in German. But as soon as we get acquainted with this weird fact, we are open to the wonders the film will offer like they appear in each of his films from the last decade.

The often mentioned “beauty” of a film by Terrence Malick is often a painful reminder of the fleetingness of it. In this case, the beauty of the mountain landscape of an Austrian village with its seemingly intact social life collides already at the beginning with hints and images of terror and destruction.

The film begins with a memory of the couple Jägerstätter´s first encounter, the young love an excursion on the bike through a landscape of breathtaking beauty. To love and to be in the world in all its glory, these euphoric moments of happiness, only Malick can transform in unforgettable visual moments. Suddenly the flowing movement of the camera stops and the beauty of a beginning love is suspended by an excerpt of a propaganda film by Leni Riefenstahl. Centered in the middle of this mighty cinema scope format and transparent as a quotation between the film´s narration, Malick does not use it without a comment or better without an “attitude” ( a quite unsatisfying English pendant of the German words “Einstellung” or “Haltung” about something.)The sound design of Malick´s film like the cinema scope-format over proportional to the academy aspect ratio of Riefenstahl´s film let literally Hitler´s hate speech drown. The fatal hate speech appears as a miserable hardly understandable croak. This moment alone is Malick´s formal very sophisticated pendant to Chaplin´s mocking of Hitler in his The Great Dictator. But it is also an example of Malick´s aesthetic system which works like sometimes an organic immune system.

That stands also for an aspect in Malick´s work which is often denied or ignored and it stands for the fact that it is pure nonsense to label Malicks films as “esoteric”. Malick´s view on human civilizations deals always with the contrast between the beauty that mankind is able to create but as well its ability for cruelty and destruction. That brings A Hidden Life close to The Thin Red Line where the cruelty and destructive power of war is confronted with an island of breathtaking beauty. It is like the beauty of the light in his most underrated masterpiece To The Wonder contrasts with images of desperate poverty and decay of America with the country´s beautiful landscapes. Malick presents the world in an extremely bright scale between happiness and deepest despair. Malick´s christianity (often mocked in much spiteful reviews) and whenever it appears is the most non dogmatic religious point of view one can imagine. And even more his religious aspect is in now way in conflict with this often overlooked realistic aspect of all his films. Sometimes, Malick´s images can be disturbing the audience like they probably disturbed himself too but this specific moments of beauty are not understandable for people who believe in nothing.

It is true with A Hidden Life, Malick leaves for now the terrain of his most personal and often playfully autobiographical inspired films from up to The Tree of Life. But it nevertheless correspondents with all his previous films. Valerie Pachners “Fani” Franziska adds another unforgettable female character to his work. As she reminds in all of his female characters from Sissy Spacec, Linda Manz, Q´Orianka Kilcher, Jessica Chastain or Olga Kurylenko, she is also the closest Malick character to René Falconetti in Dreyers La Passion de Jeanne d´Arc. That reminds us that A Hidden Life is not only “The passion of Franz Jägerstätter” but the “Passion of the couple Jägerstätter”. At all one could collect shots of human faces from all Malick´films and one had a variety of human faces as landscapes like in the films by Dreyer but as well like the heartbreaking vulnerability in the human faces in the films by Ritwik Ghatak.

The rollicking of the lovers or playing with their little daughters on the porch at the beginning are revealed with a freely moving camera almost freed of the law of gravitation. The closer the fatal signs of history are coming the more the camera seems to turn into a prisoner itself. The moment, Jägerstätter is imprisoned, the view of the camera is leaning towards a miserably trace of light from the window like a desperate captured child or a captured animal. Even Fani lives from now on like a prisoner in her own village . Outlawed by most of the villagers who call her husband a traitor the mundane walks through the village become a running the gauntlet.
Hitler´s fascism did invade and conquer other countries but also poisoned his own country from inside. Seemingly casually, A Hidden Life is full of very wise observations about fascism and its impact on every day life.

There is one pan shot through a cathedral, a breathtaking movement which captures centuries of art and architecture. These cinematic admiration is again a contrast of news reel excerpts of the invaded and bombed cities the Nazis just conquered. As Jägerstätter looks for consultation from authorities of the church and when he tells them that he can´t support Hitler because he is evil, a bishop tells him “one has a duty to the own country because the church told you so.” (Very late, in 2007,Franz Jägerstätter got his beatification, more than 60 years after his execution).
Here also Malick distinguishes religious faith and it´s distortion, in this case of the institution church (which gave in the enormous pressure the Nazi-Regime put on the church) He did it also in The New World when British conquerors occupied the new world “in the name of God”. And he also distinguished between the two man made concepts of God in The Tree of Life, the angry god of the old testament who is to be feared and the other concept of God as eternal love and forgiveness in the characters of Mr. and Mrs. O` Brian.

The scenes when Jägerstätter is imprisoned and Fani outlawed by the villagers belong to the darkest moments in Malick´s work.
Even though there is no excessive display of violence, the moments when Jägerstätter is tortured and mocked by the prison guards are often hard to bear. They remind him cynically that his faith , his decision does not cause any effect at all. Separated from his family, his martyrdom is a very lonely one. Even if we already know that Jägerstätter´s death is a historic fact like we know already about Pocahontas in The New World or about the death of the younger brother in The Tree of Life, the emotional intensity of this scene is almost to big for my little soul.
The camera movements, especially this rollicking in landscapes without borders is suspended in Jägerstätter´s small prison cell and reduced on small pan shots and this point of view seems to me like the one of awed and captured children.
We see a man who is going to die literally what Jean Cocteau means with “watching the work of the death”. But the closer the film moves to Jägerstätter´s execution the more the narration splits in these claustrophobic prison scenes and fragmented flashbacks of lost times of happiness. They try to resist against the inevitable death.
Since Malick´s comeback 1998, his aesthetic system and all the moods and emotion it evokes appear as organic - despite or probably because his use of the most recent film technology. Since his collaboration with Mexican cinematographer Emanuel Lubezki, Malick cultivated a kind of cinematic dances between camera and acteurs, a very specific element of his recent films – and which is completely and congenial continued by Jörg Widmer, Malick´s new director of photography. It is evident in this rare and strange accordance between the image making technology and the performance of actors. Usually there is a lot of space and freedom for actors and camera. It is very striking that the suspended freedom of moving actors and camera in the prison scenes gives A Hidden Life for moments a nightmarish atmosphere. The camera, the protagonists and our own view is captured in it´s rollicking around suspended.

When Fani is allowed to visit Franz the first and last time, they sit on a table face to face. Touches and hugs are not allowed. When they try to hug each other for a last time, they are violently separated. Touches, physical signs of affection, essential in a film by Malick whose god is pure love, is suppressed. The last hour of the film is literally a tour de force between heaven and hell, a fight between hope and desperation.
As the film is by its subject more bound to linearity than other filmy by the director there is a special dynamic between more grounded elements and a camera which tries always free itself. Malick uses a lot of original letters between Fani and Franz Jägerstätter, mostly spoken in voice overs by August Diehl and Valerie Pachner. That creates this dynamic between a historical drama and a poem about an almost forgotten martyr.

After 3 hours the end credits begin with a quotation by George Eliot: “The growing good of the world is partly dependent on unhistoric acts; and that things are not so ill with you and me as they might have been, is half owing to the number who lived faithfully a hidden life, and rest in unvisited tombs.”
So ends the film, for my side one of the most emotionally exhausting cinematic requiem since The Tree of Life. But it is as well the end Malick´s most important decade of film making, the last film of a breathtaking series of 6 masterpieces in only 8 years. It is not only another example of his exquisite meditations about faith and religion, but it is as well one of the wisest meditations about fascism and its fatal impact on ordinary lives. Terrence Malick´s A Hidden Life is in good company with another masterpiece from 2019, Aparna Sen´s Tagore adaptation Ghawre Bairey Aaj (The Home and the World today) which is like Malick´s film a very rare symbiosis of a political comment and formal cinematic excellence. 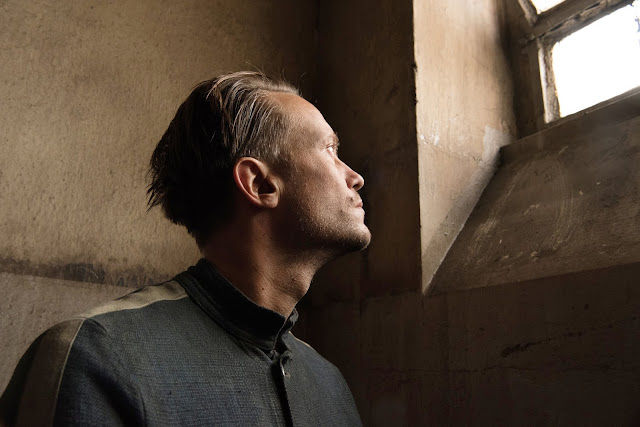 Posted by shomingeki at 3:03 PM