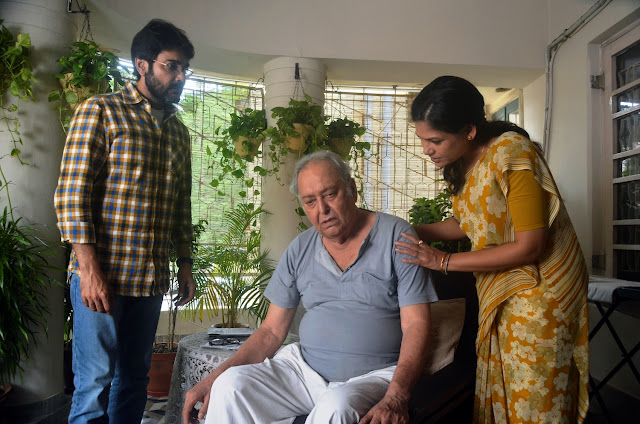 At the first sight, Mayurakshi appears to me as a very sober film. But finally as the film proceeds, the surface, the first impression competes with the thoughts and emotion the film will evoke. One of the basic abilities of cinema is to confront us with the material reality of our world (in this case as well the time we live in) it can mesmerize, move or scare us not so much in what its images present but in what they evoke in us. These emotions of grief, sorrow or fear are often feelings often hidden in our every day routine.

The narration of Mayurakshi (even though we know that every narration in a fiction film is modified, invented or sometimes even forced) does not appear as a told story but as a story which literally arise from certain defined situations. Aryanil is a middle aged man who arrives in Kolkata from Chicago where he lives and works. He returns to his native city for a few days to visit his old father Sushovan. Sushovan, once a brilliant professor for history, is now suffering under a beginning dementia and other symptoms of mental and physical decay typically for his age..
Aryanil is already divorced twice and has a teenage son who studies abroad. If he is not with his old and fragile father he spends some time with his cousin or a Sahana, a woman of his age, who is a close friend since childhood.

At the beginning the film deals a lot with the measurable things of our modern time, airports, cars, the accurate book keeping recorded in the computer by the house keeper,, the precise technology of the medical instruments which analyze the physical condition of Sushovan and finally the precision of the filmmaker´s instruments for creating images and sounds itself are slightly tangible. A counter current of this very sober and rational aspect arises from Aryanil´s unsteadiness, his doubts, his failures and finally his helplessness towards the decay of his father. There is the wealth and the order of a middle class household on the surface and the small hardly perceptible ruptures underneath.

The film does not only present images of people things and places in the here and now but also memories of lives and stories which are going to disappear from human memories which depend on mortal bodies. And these human memories are depending on a living and mortal human body.
As the film proceeds beside the presentation of the characters lives, there are slight shadows, ideas how their life could have been otherwise if they had made different decisions. Aryanil, alienated and disconnected with his native city and whose life is stagnating is confronted with both: his failures but as well with the chances, the options he missed or abandoned.

There is a small, but unforgettable moment. Aryanil spends an afternoon with his childhood friend Sahana. They are in the (her?) bedroom and share a cigarette. There is a deep intimacy between them but without any obvious erotic attraction. He rests with his head on her lap and dozes off. When she asks him:”Did you just fall asleep”, she sounds rather slightly irritated than shocked. In a few seconds this scene reveals both: a closeness between them in every day activities but also (whatever they went through in their history and if there was once a kind of amorousness between them or not) the certainty that they will never be a couple.
From now on the seeming soberness of the film will be undercut by fragments of longings, emotions of grief and losses. If they are hidden in this film or evoked in me or both, I do not know.

Another example is Soumitra Chatterjee´s performance as Sushovan. One can feel both while watching the performance of this great actor who is almost something like a living legend: the professional virtuosity of an actor with more than 50 years acting experience but as well (and what his performance evokes in me), a heartbreaking embodiment of an old man at the end of his life who faces decay and loneliness. How Chatterjee felt playing a character of about his own age, I do not know.

Like phantom images behind the visible images presented in this film, a different film more rich and more moving arises as mysterious like the formation of organic life out of dead matter.

Mayurakshi the film title refers to a woman who was once (if I am not mistaken) a student of Sushovan. The history professor was very fond of her and dreamt of marrying her with his son Aryanil who refused this proposal. Sushovan´s wish to see her again urges Aryanil to look for her. When he finds a very close track to her whereabouts, he finally abandons his search and tells his father a macabre lie. Mayurakshi soon will disappear with Sushovan´s decay and inevitable death like this manifestation of a dear childhood memory embodied by the sled called Rosebud in Orson Welles´ Citizen Kane. This chapter of the film is almost as sad as when we see someone dying and there is nothing we can do about.

The film ends like it began, at the aiport, one of the most sober, impersonal and anonym places I can imagine. Of all the things, the strongest emotion displayed in this film takes place here: Suddenly while waiting for the return flight, Aryanil begins to cry, a sudden emotion where he has no control over it anymore. Another passenger asks him if he is alright but soon he goes back to his seat and again the whole airport is an anonymous place and Aryanil´s loneliness and forlornness seems even increasing.
Through the windows of the plane we see a beautiful light which breaks its way through heavy clouds. Aryanil is now only a passenger amongst other and with him we leave the fictive world of this film.

The film has as well a very unique soundtrack. Sounds (like the obligatory street sound from an Indian big city) and the music are subdued and restraint like the very economic display of emotion and drama. Prasenjit Chatterjee, Indrani Haldar and most of the other actors remind me in their acting rather in the more minimalistic performances in the films by Ozu, Dreyer of Hou Hsiao Hsien.
But when I watched the film a second time, it was of all things especially this suppression of emotion and drama that evoked so much melancholy in me.

At the end, Aryanil does after the events of his short but intense journey the same what we do after just having watched an intense film which appears in my memory much less sober like at my first impressions. He reflects about his experiences in his native city which is not his home anymore and what they evoked in him. Like us he just begins to deal with the emotional impact this journey had on him, this film had on us.

Mayurakshi by Atanu Ghosh is not only another impressing example of the shamefully neglected world of Indian cinema outside of Bollywood, it proofs once more that India belongs to the most sophisticated film countries of our time.
My journey with Indian contemporary cinema began 14 years ago when I discovered for myself the wonderful films by Aparna Sen and there is no end of this journey in sight. Mayurakshi is as well another example how much we can learn from Indian cinema about the meaning of cinema but as well why a future without cinema is impossible.

Posted by shomingeki at 12:51 PM No comments: