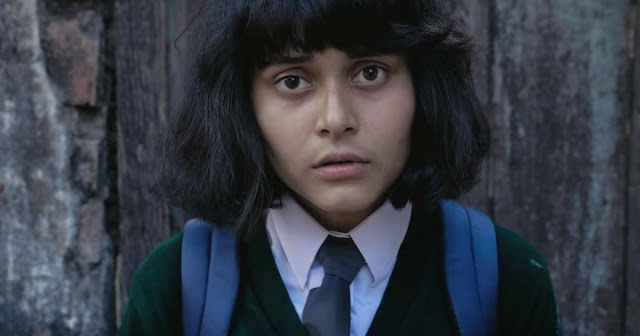 It became for me a little tradition each year to watch a film at this strangely named “Indo-German” Film festival in Berlin. It began with Konkona Sensharma´s highly praised first long film A Death in the Gunj and one year later I saw Anup Singh´s The Song of Scorpions, films which are difficult to find on the big screen of my city. This year it was Sudipto Roy´s first long film Kia and Cosmos.

The title suggest a double meaning, first it is about the 15 years old autistic girl Kia who investigates the murder of a pregnant cat from her neighbourhood but it is also about Kia and her cosmos. Her cosmos that is the concrete city landscape of her neighbourhood in Kolkata but also her imagination, her passion for mathematics, writing stories or reading the detective novels about Feluda and Byomkesh, these two most popular detective characters among Bengali readers.
Her social cosmos is her single mother (separated from her husband), her teacher Souvik and the young rickshaw driver Rabi. Rabi picks her up every day for school and backwards. Her every day life follows always recurrent routines, like school or the quarrels with her always stressed mother Dia. But part of her cosmos are as well the streets and small alleys of her environment which we see often through her eyes. These alleys, streets or backyards are more colorful than in my memory. Under the influence of the street lightning it appears as a mystic place of dreamlike beauty, the ideal background for the murder mystery novels Kia loves so much.

Roy sometimes uses subjective shots in which we follow Kia´s movements, moments in which we see how Kia sees the world. In other moments the subjective perspective is replaced by long, hardly moved shots when she is alone in her room, with her teacher or her mother. Especially the shots when she is quarrelling with her mother, who is often overstrained, are very long, very intense and they often leave the bitter aftertaste of alienation and the lack of communication which reminds me in the films by John Cassavetes. That is sometimes emphasized through the spatial distance between the characters through the mighty cinema scope format.

These moments of a sober naturalism which puts the confidence in the precise and seismographic ability of the cinematic apparatus is contrasted by these moments of imagination when for example Kia is making with Rabi a forbidden excursion through the nightly city. These are dreamy moments which strangely evoke in me the imagined city landscapes in the animation films by Hayao Miyazaki which are inspired by real architecture but recreated into a mystic dreamlike landscape.

The relationship between the subjective moved shots and the long almost static ones from a rather objective point of view reveal the movement between Kia´s difficulty to communicate with her social environment or define her place in the world – or if we want- in her “cosmos”. But it also reveals the energy she needs for managing her life and the imagination that gives her the strength to live.
The film does not even comes near any conventional sentimentality or pity-provoking dramas about handicapped people. Roy´s playful and versatile visual style makes both equally present: Kia´s suffering but as well her strength to live.

In all its playfulness poetry and dreaminess, the cinematic richness this film is offering, bases as well on hard and very grounded work. One of these foundation from which the film unfolds its glory, is the performance of Ritwika Pal, which reveals all colors of human feelings and moods like a kaleidoscope.
The body language, the lack of a proper verbal or non-verbal communication the hyperactivity and even slight primary troubles must have been accurately researched. Even Kia´s obsessive behaviour in her every day actions look of amazing authenticity. It is one of these indescribable moments when it is hard to distinguish the poetry and imagination an actor evokes and the sense for the physical work of acting which causes this. traces of exhaustion in Pal´s face which could be the exhaustion of the character´s or the actress herself. Her performance reminds me in some glorious performances by Konkona Sensharma or Kalki Koechlins acting in Margarita with a Straw by Shonali Bose – and sometimes as well in the young Robert de Niro.


Finally, Kia leaves her “cosmos” for a while. With the stolen credit card of her mother she makes the long journey to the far distant city Kalimpong to look for her father. Her father, a dreamer and activist of a movement (which is only vaguely described) has left her mother. Kia finds out the reasons why her parents had separated themselves from each other. From a murder mystery and Coming of Age-drama, the film reveals now a family drama. On her journey by train, the young girl occurs as lost and vulnerable but as well admirable for her courage to confront herself with the truth about her dysfunctional family. She describes the encounter with her father “as a journey to a far distant star “and the mother “as the power which will bring her back to earth”. That sounds as well like a beautiful description of the two big movements of the film which complement each other. .When she looks down to the panorama of the city Kalimpong, the lights look like a cluster of stars in space. Kia explores the unknown parts of her cosmos. Like most of all great films with a strong “Coming of Age”-element, Kia and Cosmos ends with a question. Kia has to choose how she continues with her life how to go on with the search for her place in the world.

In a perfect world, this film would run in the good old repertoire,- or art house cinemas (as far as they are still in existence in India and elsewhere else). In India and some other countries (USA or Germany not yet included) Kia and Cosmos is available at Netflix. Now, I really understand how lucky I was to have watched Sudipto Roy´s wonderful film on the big screen where it belongs. My persistent effort to explore Indian cinema outside the merciless commercial Indian film industry was rewarded once again with another hidden gem.

Posted by shomingeki at 3:10 PM