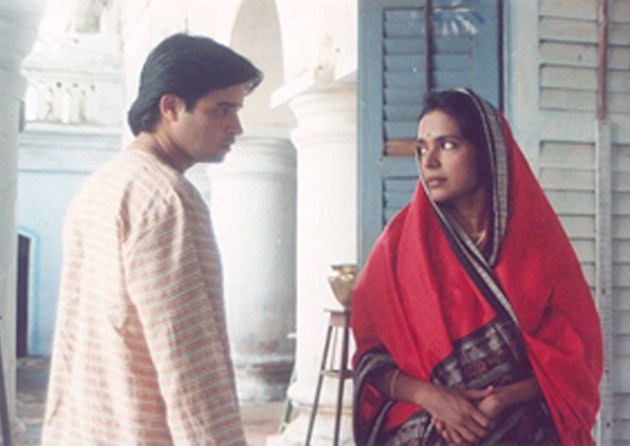 "Nature is not on the surface, it is deep inside. The colors are the expression of this depth on the surface. They raise up from the roots of the world. They are their life. The life of ideas."
(Paul Cézanne)

Sometimes, writing on films feels like writing against the amnesia in the film history. There is probably no cinematic heritage among the great film nations which is more endangered than the very complex and versatile cinema of India.
Abhaas is the second long feature film my Mrs. Bijaya Jena, an actress and filmmaker from the Indian state Orissa. This film from 1997 was recently restored for film-festivals and reprises. But restoring means as well to safe a film not only against being forgotten but also to safe it against the physical decay of its print source.

And from the first sight the film won me over as an incredible beautiful color film which evokes in me memories of such extraordinary examples in the use of color for films like Jean Renoir´s mesmerizing The River, John Ford´s daring use of color in She Wore a Yellow Ribbon, Ophüls´ Lola Montez or Kubrick´s Barry Lyndon. But Abhaas is also a film which goes through several metamorphoses and it has a long echo weeks or months after I have seen it. There is still the echo on my retina from this purples, violet, red and green tones. I do not feel much less intoxicated like the Astronaut Dave Bowman in the psychedelic star gate sequence in 2001: A Space Odyssey.

The film begins with a family meeting where all the characters are introduced: the rich landlord Ray who gave shelter for the young poet Chandra and the young widow Kukila. Ray´s daughter has visited the landlord with her little boy Rabi. The story the film will tell, the persons´s stories it will select originate from the microcosm of a family. At the beginning there is a fascinating dynamic between a quiet pace and the awesome visual beauty of the colors. The tragedy is yet hard to trace but one can have a slight idea of tectonic movements under the surface. In the first 30 minutes, the film flows in its episodic structure and the more the film proceeds, the more we recall the beginning, and in retrospect each moments occurs as precious. One of these small ruptures under the beautiful though decaying beauty of Ray´s country estate there is a moment during a religious ceremony when the priest protests against the widow Kukila´s participation.

Chandra, Kukila and the little Rabi make excursions to a fair and later to a little waterfall. Chandra recites poems for Kukila, the child is bored. But this little jaunts are of mesmerizing and of almost dreamlike beauty. These three characters seem to live in their own world – and just alone these contemplative moments alone are traces of an unforgettable cinematic paradise. They will remain in my memory when the film changes into darker moods. Watching the film correspondents always with recalling earlier moments of this film.

When Chandra and Kukila begin to fall in love for each other, Chandra learns that Ray secretly seduces the young widow. And as soon as the family learns that the young people have feeling for each other they try driven by class conceit to remarry Kukila as soon as possible. The comparatively liberal Ray (the film takes place in the 1950s) appears now as proprietorial, the young people adopted into this family are reduced to human property. There is a last desperate try of Kukila to persuade Chandra to escape with with him. They do not live anymore in their own world, the are part of Ray´s human property in a world dominated by worldly power.But this is only a short rebellion against the fate. Kukila learns that she is pregnant. To avoid a scandal, Ray organize in the village an abortion. The abortion fails and Kukila dies.
The episodic narration leads now to a pointed tragedy. When the police is alarmed and the incorrupt physician reports the death case to the police, Ray blames Chandra for both, Kukila´s pregnancy and her death. Chandra has to go to prison for some years and he does it without protest and without the least try to declare his innocence.
After this fierce dramatic development, the film calms down in a mysterious way.
The paradisiac beginning and the tragic end of a love story have gone and the film moves to its third movement. In his prison cell, Chandra writes poems, most of them are an echo of his lost love. This is as well a metaphor of this film which deals in its third part with reflections, memories, inversions and with the past beauty and tragedy of the previous two parts.
In between Ray is hunted by his guilt and literally by Kukila´s ghost which leads him to illness and death.
Abhaas reminds me sometimes that I see films often like I hear my favorite music. Cinema which is almost connected with all other arts, moves often between its concrete graphic nature and an abstract aspect. But I also think it is a film about the work of our memory in the sense Chris Marker reflected in his Sans Soleil on Hitchcock´s masterpiece Vertigo.

The fiction of a film is always lending the real things, buildings landscapes and beings of this world and at the end everything has to be given back.
Chandra, the poet inherited a piece of land Ray wanted to give him before he passed away. The landlord driven by his bad conscience has even published Chandra´s poem. But at the end, when Chandra´s innocence is proven, the poet does exactly what the audience has to do: to let all things go. Chandra, the Sufi poet vanishes into the infinity of the world. A deserted riverbank at the end, almost cleaned by traces of the film´s fiction which has inspired, mesmerized and us and which made us reflecting about it a very long time.
When in he end credits small frames with fragments of the film appear, than the whole film fixed by this chemical and mechanic process appears almost like a memory based on the organic process of the human brain. And it is hard to believe that human lives are condensed to less than 2 hours film.

In the middle of 1990s when the film public out of India, especially most of the big film festivals abandoned India cinema. Abhaas is an almost forgotten masterpiece. With the restoration of this film, a piece of cinematic memory is saved. With Satyajit Ray´s wonderful last film Agantuk, Shaji N. Karun´s Malick-like masterpiece Swaham and Aparna Sen´s grim and disturbing Yugant, Bijaya Jena´s Abhaas, probably my cinematic rediscovery of this year is for me another enlightenment of Indian cinema of the 1990s.