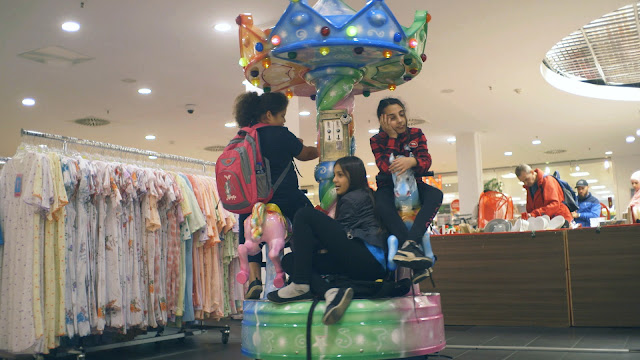 Kinder is the graduation film of young filmmaker Nina Wesemann who sudied at the film school in Munich (HFF München).

First of all the appearance of such a film on a big festival proves again the courage of this very special children-, and youth section.
I remember during the Q&A after the screening yesterday, a small kid asked “what is this film about”. That caused quite a laughter but in its innocence it was quite close to the centre of this remarkable piece of film. The more I think about this film, the more I respect it. It is far beyond a clever graduation film of a clever student but a challenging experiment with children and film. Kinder is not one of these projects which are just confirming already ensured theories of cinema but a wild, wise and sometimes innocent beauty. And sometimes the film has the brave spirit of the first film pioneers. With this documentary, I feel like having experienced a journey through the history of documentary cinema from the Brothers Lumière to everything what is possible today. The whole film is like a precious unpolished jewel and it offers both the enthusiasm of the film pioneers and the wisdom of more than 120 years of cinema.

The film revolves around three different groups of children, all from different parts of Berlin. They might not know about each other but the film connects them to a mosaic of a childhood in Berlin.
What strikes me most is the articulation of Nina Wesemann in her cinematic point of view. And again I have to stress the wonderful explanation of the German word “Einstellung” by Wim Wenders which goes far beyond its English equivalence “shot”. “Einstellung” includes as well an attitude for or about something.

A child on a play ground, totally absorbed by its play. If the beauty of this fleeting moment is caused just by a strong confidence of the filmmaker in that what happens in front of the camera or is it caused by her crucial “Einstellung”, her decision as a filmmaker?
Sometimes, as soon as the children get aware of the presence of filmmaker and camera, they begin to “perform”. That reminds me in some famous moment in Robert J. Flaherty´s Nanook of the North.
An equivalence in Wesemann´s film I see in the moment when a boy eats a very hot pepperoni where it is not always easy to distinguish what is his authentic physical reaction and what his “performance”.

Sometimes the cinematic point of view is from a grown up at children, sometimes I imagine Nina Wesemann using her camera like a time traveler looking for her own childhood. In other moments her point of view seems as absorbed by the events in front of the camera like a child playing in the sand.
The poetry of cinema - no matter if fiction or documentary - has to do with a fine sense for how and when to create and how and when to just let things happen.

Like photography film is an art created with the assistance of a mighty apparatus and cinematic poetry is sometimes a very fine adjustment between human and machine.
Sometimes cinema absorbs us and sometimes we have a slight idea of the presence of this machine.

Sometimes we see children who are filmed, sometimes we see the children we once were. These moments evoke in me the old photographs in my family albums from my childhood and I myself am absorbed in the things I see on the screen and the memories they evoke in me. Between these moments of absorption there is the slight awareness that this film is created, composed and structured. In Kinder, we see a lot of sequences shot from driving local trains, busses or trams. These sidewards movements flatten the image to its original two dimensions. Like in these many train scenes in the history of cinema it appears to me as an analogy of a film strip which moves through a projector. The poetry of cinema is often this movement between the illusion of depth and the awareness of the technique which enables this illusion.

These children play often question and answer-games. There is a moment when they articulate in a playful way questions about the origin of the universe and life. Some other children are visiting a historical museum in Berlin. All these fragmental seemingly accidental episodes sum up at the end to a film which articulate very wise questions about the world but also about film.

Kinder by Nina Wesemann is an exciting discovery from the more experimental side of this wonderful Berlinale-Generation which makes me hopeful for the future of this often endangered child of the late 19. Century called cinema.