Notes on By the Name of Tania, by Bénédicte Liénard and Mary Jiménez, Belgium/Netherland: 2019-Berlin Filmfestival 2019 II.- Generation14plus 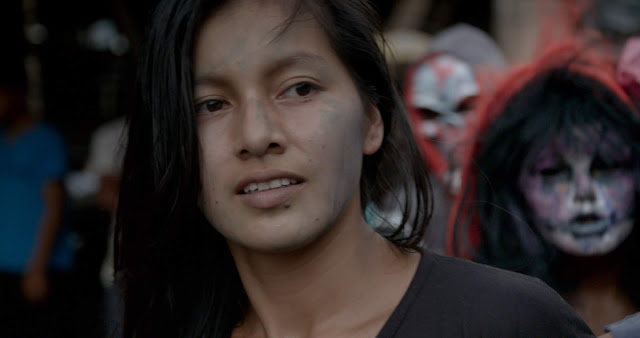 How to present the dark side of the world in images and are there images which not only reflect these dark sides but also form a kind of resistance? These are questions as old as the history of documentary cinema. By the Name of Tania tells about one of these girls in Peru who leave their native villages for a better life. But they are allured by fantastic rumours like for example that there are rich men who will dust the girls they prefer with gold dust. But the girls end up in forced prostitution, they are beaten up, raped and their dream of freedom ends up in slavery. At the first sight such a synopsis sounds very suspicious like social porn camouflaged as a social report.. But from the first moments on , the film goes a very different way. It is a very complex film essay which moves permanently between fiction and documentary and reminds me often in the experimental films by Trinh T. Min-ha or in the films Marguerite Duras, especially in the use of over voice narration..

The film is focused on Tania. The name is fictive but gives an idea of identity. As she has a name, she is nevertheless an example of the faceless crowd of young woman or minor girls who are exploited.

The first images present landscapes. At first a young woman is lying on a bed. The room is red lighted. The contour of the body, the room and the colours are slightly disintegrated into a blur. The other landscapes are the geographical ones of the Amazon, sometimes in its natural glory, sometimes destroyed and disgraced by copious gold digging and big slums.

The film does not move always in a chronological order. Tania´s over voice comments are sometimes referring to moments we see but sometimes her voice is literally taken out of time. Once we see her looking from a terrace down to a city. The terrace appears as a frame in the film frame. It is a seldom quiet, almost contemplative moment. This little rest period seems to be necessary for both, the protagonist and the spectator to deal with the horrible events the film tells about..
Sometimes when Tania is in front of the camera, almost like in a conventional interview situation, we see the natural or urban landscape in the background which looks strangely flat while Tania´s physical appearance is almost emphasized like a three dimensional figure.

What the film finally offers, is a kind of protected zone like I suggested in a different kind in my text on Anamika Bandopadhyay´s The Third Breast. All the horrible experiences of Tania are only revealed in her commentaries. The filmmakers refusal to redouble the suffering of their protagonist in not illustrating it, might be the most important artistic decision.

Once we see Tania waiting in a police station before and during her testimony. The impact of this film is split into two aspects: the first is the awareness that Tania is only one example of this exploitation and slavery of young women, the second one is the idea of hope in distinguishing Tania always as a subject. A reason more to create a special even artificial space for her. The dynamic of documentary and fiction appears as the key to understand the film.
I do not really know how Tania´s comments are filtered from a lot of research interviews with these victims of slavery, forced prostitution of often girls of minor age. The elements of performance and documentary interviews are often difficult to distinguish. The film tries to accomplish both, compassion but as well discretion.

There are often moments when the contours of bodies and things tends to be dispersed into colours and surface, a kind of reduction of the film image to its natural flatness, an disembodiment of the physical world. The illusion of the perception of bodies is for a moment suspended. One can read it is a sad link to a moment when Tania comments: “It is not my body anymore.”
By the Name of Tania is also a film about destroyed landscapes, the human and the geographical ones

It is this cinematic tactfulness for closeness and distance, for compassion and discretion which will stay with me. It is again another variation of “caméra stylo” and in its emotional impact it recalls films by Marguerite Duras like Les Mains Négatives and her two Aurelia Steiner -films.

Posted by shomingeki at 7:34 PM