Notes on Bulbul can sing by Rima Das, India: 2018-Berlin Filmfestival 2019 I. -Generation14plus 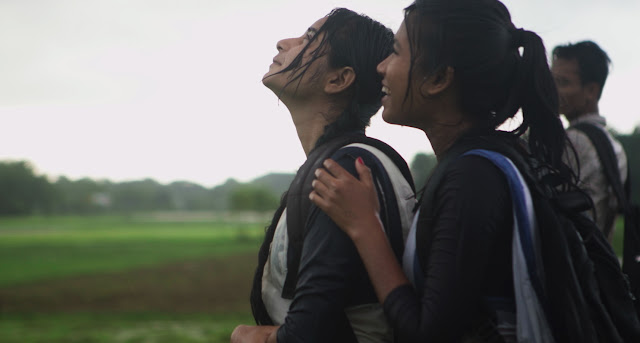 Two thoughts came into my mind when I saw this film. The first was an idea from Helmut Färber´s film essay 3 Minutes from a film by Ozu, an analysis of a scene from Banshun (Late Spring) where Färber quoted André Bazin´s text on Renoir´s masterpiece The River and when Färber mentioned the feeling that some films seems like to made by themselves. The second idea has as well with André Bazin to do, when he mentioned in his book on Jean Renoir the term “Avantgarde of the heart”. This term meant for Bazin all currents in film history important to him.

What we know about Rima Das is that she works mostly with non-professional actors, she is her own director of cinematography, editor, writer director and producer. That these independent films do not have a big budget is a fact we have already forgotten after the first minutes. The films moves freely between epic and very personal cinema. She does not only tell about a village community of the federal state where she comes from, she offers as well a visionary very universal and very cinematic praise of the tangible and visible physical world, you find elsewhere only in the films by Ford, Malick, Renoir or in this rare Vietnamese masterpiece Thuong nho dong que (Nostalgia for the Countryside) by Dang Nhat Minh.

There are two adolescent girls and a boy of the same age. They spend their free time together. The traditional gender roles have not yet power over them. They live in a village in Assam and at the beginning they are still unknowingly of the strict patriarchal rules in this village. Piece by piece the world with all its ambivalence unfolds and the perception about the world like it is, is nothing else than the result of a remarkable observation. For now the girls Bulbul and Bonny and the boy Sumu are inseparably. It seems that the film is not telling a story but the story arises from the things, landscapes, people and beings we witness. The cinema scope-photography creates a dynamic range between intimate and epic cinema. The camera literally caresses its young protagonists and all living beings. There is a tenderness towards living beings, if towards the protagonists, or just a goatling or a little cat. Sometimes it is just a hand which touches the plants on the fields.

Bulbul can´t sing in front of an audience despite her nice voice. That frustrates her father, a musician. But the film is already singing the whole time a praise of all visible signs of creation with a intensity very close to the last films by Terrence Malick. Later when the beauty of the world collides with the man-made world with its meaningless rules and restrictions this “song” gets darker and more elegiac.

Bulbul can sing is another enrichment of the sub-genre called “coming of Age”-films. This genre reminds us in the bittersweet memory when the world is split in how it could be and how it really is.
The moment when a harmless dalliance between teenagers causes a scandal in the village, the film has its tragic turning point. Beauty and poetry faces soulless rules and restrictions. The school director who appears almost as a Kafkaesque representative of a stiff power, orders a school expulsion against Bonny and Bulbul. From now on the playfulness, the tenderness is piece by piece replaced by oppression and loss.
The river near the village was often a place of games, fun and dreams for the young protagonists. Near the end it appears like a reflection of a lost dream.

When the film moves to its end, I get an idea about its richness and I still can´t believe it is presented in only 95 minutes.
At the end Bulbul and a woman from her village go to the river for mourning the loss of a loved one. Bulbul sings quietly. They are framed into this mighty landscape and the clouded sky at dawn. This moment is a good example for this combination of cinematic landscape painting and human drama.
And I am totally disrupted between the breathtaking beauty of this film and its heartbreaking finale.
How can I further describe a cinematic experience which not just sums up experiences but intensifies experiences into a visual poem which will stay with me for a long time.
Bulbul can sing is a film which has an absolute confidence in the potentials of cinema. It is a film of absolute attention towards the things it presents and therefore great cinema. After the films by young filmmaker from India I saw recently like Konkona Sensharma´s A Death in the Gunj, Pushpendra Singh´s Ashwatthama or Kanwal Sethi´s Once again. Bulbul can sing by Rima Das is another gem outside of Bollywood and a very promising example of young Indian cinema.
There was a time when the Berlin Film festival played a key role in the promotion of Indian art cinema outside of India. It was in the 1970s and 1980s. In the last decades, Indian cinema appears in Berlin only very sporadic and the very few great films I could see at the Berlin Filmfestival appeared only in the Berlinale-Forum and the Generation-section.

And yes, a cinematic beauty like Bulbul can sing is one of the reason this Generation-section became over the years my favorite section of this film festival.