Notes on The Song of Scorpions by Anup Singh, India: 2017 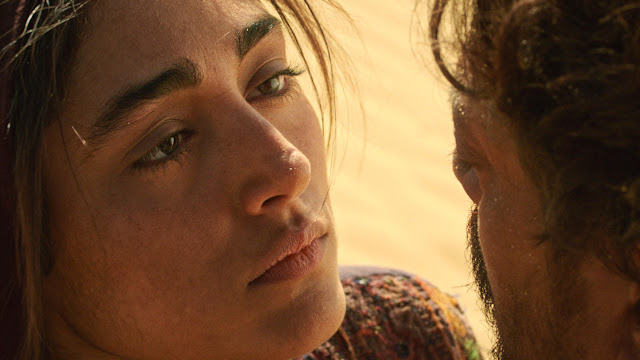 Ten years ago I had a talk with a Bengali film critic. When I praised Anup Singh´s Ritwik Ghatak-homage Ekti Nadir Naam (The Name of a River), the critic answered that he (Singh) was not one of us:” That irritated me a lot, not only I consider his dreamlike poetic reflection on Ghatak as one of the finest homages one filmmaker dedicated to another, I felt uncomfortable with this arbitrary and easy use of “us” and who belongs to what etc. This memory came back to my mind when I saw last summer Anup Singh´s latest film The Song of Scorpions during a Film festival in Berlin with the strange name “Indo-German Film festival. In the discussion after the film, Singh explained his decision to cast the female main character with the Iranian actress Golshifteh Farahani. He met her once during a festival and they had intense discussions about Singh´s previous film Qissa and as well about what it means being exiled from one´s country and culture (Farahani is exiled from Iran since 2012). Finally Farahani plays a woman from Rajastan. The often overused terms like home or identity are often fixed values in different civilizations. But they can be taken away from us very quickly. Singh described her character Nooran as “exiled from her house, her family and finally from her body”.
In the three films by Anup Singh (who was born in Tanzania) exile appears always in the complex meaning of this word. All his characters (as well in his poetic essayistic Ghatak Homage) are uprooted exiled and homeless. Irrfan Khans and Tilotama Shomes characters in Qissa or Irrfan Khans and Golshifteh Farahani´s characters in The Song of the Scorpions offer visible embodiments of what Kumar Shahani said once on Ritwik Ghatak that partition does not only mean a geographical partition but a partition which goes through body and soul of the people.

Singh called his new film as inspired by folk tales. This invites me to compare it with another great contemporary film which takes place in Rajastan and is also inspired by a folktale, Lajwanti by Pushpendra Singh. While Lajwanti presents an image of human civilization where the people are deeply rooted in their landscape and culture and what we call identity. The world in Lajwanti might be already an echo of a world which is already lost - but that is another field. The world in The Song of Scorpions is already introduced as a world in the process of going apart. If I am as a spectator in Lajwanti an invisible guest who can contemplate, in The Song of Scorpions I feel an uncanny and painful closeness to the cameleer Aadam (Irrfan Khan) and the young healer Nooran (Golshifteh Farahani and their disrooting from a world they once belonged to.
These two great films present two sides of cinema, the first reminds us that we are part of the world, part of our culture, of all we call home, the other film reminds us this certainty is not guaranteed. It is bit like we see first a film by Ozu and later a film by Ghatak.

There is for example the tradition of healing. Nooran is learning from her grandmother Zubaida (Waheeda Rehman) the art of healing. A sting of a scorpion can kill a person in 24 hours. These healer can safe lives when they literally sing the poison out of the body of the victims. But this tradition carried from one generation to the next is endangered. Nooran is not yet ready to replace Zubaida and the old woman herself is close to the end of her life. There is the threat that this circulation will be interrupted. I remember an intense glance of Waheeda Rehman the moment before she falls into sleep which is intense and at the same time a reminder of cinema as the art of presenting glances. The fact that is the last moment of her appearance in this film makes this moment the more unforgettable. This notion of disappearance and death stays with me.

Another narrative element is the relationship between Nooran and Aadam. There is no chance that a kind of love story can develop, just two lost souls who never should have met appear. One gets an idea of this disaffected relationship which will be confirmed much later through Aadam´s very cruel intrigue. Nooran is attacked and hurt by a friend of Aadam. The grandmother has already disappeared and might be dead. As the film proceeds Nooran agrees to be Aadam´s second wife (after she rejected him before) the tragedy unfolds.
When one of Aadam´ s children asks her to sing the song that heals a sting from a scorpion she answers, that she can not sing anymore because the poison is inside her.

A central visual motive in this film is the harsh contrast between darkness and light, night and day. At night one sees only fireplaces, vague silhouettes of people and sometimes reflections of traces of light in their eyes. It is a darkness almost as a night sky with far distant stars. During the day the sun burns merciless on people, animals and the desert landscape. In both extremes people appear as exposed and vulnerable.
The contrast between darkness and light presents also two extreme poles of cinema, the inspiration, imagination caused by things we can rather guess than notice. The other extreme is the burning sun during the day. It burns merciless on the faces of these actors. No detail can escape our attention. They are exposed and for a moment the thin layer of fiction is suspended behind a strong feeling for the physical presence of Golshifteh Farahani and Irrfan Khan. Cinema can not exist without light, but here light appears as well as an destructive power.
Near the end there are some close ups of the faces of Irrfan Khan and Golshifteh Farahani. It has an intensity which is only sensible on a big screen.These are faces of two lost souls in a failed relationship and a civilization which goes apart.
This fatal combination of human failure and the indifference of nature in this desrt landscape give the film an almost apocalyptical taste like the ending moments in films like Erich von Stroheim´s Greed or Ritwik Ghatak´s Titash Ekti Nadir Naam (The River Titash), moments which are literally burnt in my memory.

Nooran disappears at the end just like her Grandmother and more or less this film is as well a film about disappearance.
In a sentimental and blissful mood, I often consider Cinema as my true home but nevertheless a film like The Song of the Scorpions can remind us as well how fragile these terms home or identity are and that they can be taken from us without warning. There is a kind of cinema through which we approach at least an idea how to dwell in the world as strange or familiar it appears and there is a cinema in which we have to redefine our place in the world.

Posted by shomingeki at 3:23 PM