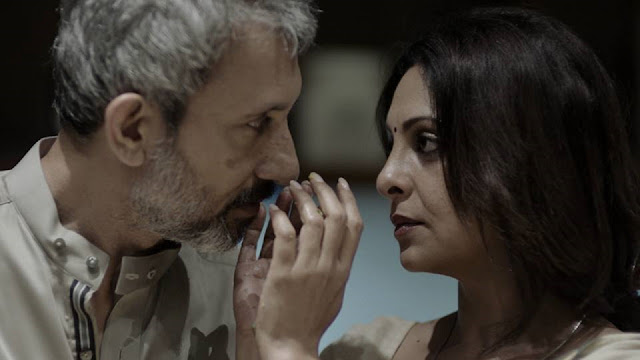 In recent years, I often came across films which have either a limited release, no proper release at all or they are distributed soon as Video on demand. In the best case these films have limited theatrical release or at least some screenings before they are sacked by Netflix and Co. One of these films is Once again by Kanwal Sethi, a work which definitely should be seen on the big screen.
In recent years, I came across films which are strong enough to stand for themselves but which offer as well a vision or at least an idea of the greatness of cinema and its history. It does not mind in what part of the world they take place or in what part of the world they tell from.
Once again belongs to the films which reveal stories about ordinary people and reminded me in the stylized Japanese every day dramas like for example in the legendary masterpieces by Mikio Naruse or Yasujiro Ozu, the style remains at the first sight hidden behind a simplicity which suggests these films are almost made by themselves. When one begins to look a bit deeper, one can come to the conclusion that these films seemingly simplicity can also be seen as one of the highest cultivated aesthetic principle.

The synopsis of Once again could be told in one sentence. An aging Bollywood-star fells in love with a widowed restaurant owner. But to describe its formal fineness and all the different moods, feelings and ideas the film evokes is quite a different challenge.

A big part of the dialog are phone calls between two middle aged people the divorced actor Amar and the widow Tara. Sometimes we see them during their secret phone calls, sometimes the phone dialog appear as voice-over and independent from the action of the protagonists. Once again is also a “city film”, in this case it takes place in Mumbai and often at night. Old and modern buildings, crowded streets, shops, food,- and tea stalls suggest a place which has its own life without the film´s fiction but also without us as spectators. The fiction appears as very delicate and I often fear it will vanish in this microcosm Mumbai. But this fear increases my attention. The characters do not explain themselves only in words. One has to watch them and listen to their mostly very quiet conservations performed with an incredible stylized, almost Japanese slowness. But the attention will be rewarded by glimpses of beauty and poetry hidden in this seemingly sober constructed film. The wonders seem to grow amidst the sad and monotonous every day life of two middle aged and very lonely persons.
There are moments of high intensity. In one of these moments brings Tara, the restaurant owner like on many evenings food to Amar´s luxurious apartment. This time some colleagues of him are are there. He introduces Tara as the “woman who cooks for him”. After his clumsily lack of sensitivity we see a close up of Shefali Shah. In this shot reveals in seconds what Tara might feel. And again like in the films by Ozu, such small moments can have a mysterious emotional power.

Another moment is a dialog between Amar and his driver. When Amar learns that his driver is abandoned by his wife and children because of his time-consuming work, there is nothing more to say, Amar hugs his driver in a sudden mood of compassion.
A look to the seaside, seen from Amar s apartment: there is nothing idyllic in this glance. It seems as empty like an abandoned film set. The famous aging film star appears for this moment like the ghost he plays in one of his recent films.
When we see Tara telephoning with him, she is in her little bedroom, the last hideaway to safe a minimal privacy.

The “dramatic conflict” as suggested by the story unfolds when a paparazzi discovers Amar and Tara during one of their secret meetings at night and soon Tara´s whole family gets alarmed. Especially Tara´s son has no sympathy for his mother´s longings. It is a likely conflict we know from two different masterpieces which as well embody two different approaches: Douglas Sirk´s melodramatic All That Heaven Allows and Yasujiro Ozu´s Akibiyori (Late Autumn). Kanwal Sethi seems to tend strongly to the Ozu-option to defuse the dramatic effect and again to count on the spectator´s attention. Both options evoke feelings, but Ozu and Sethi´ s approach begin as a start on a very sober revealing of a woman´s place in a society under certain circumstances, the conflict of the individual longings and wishes and the obligations forced on them by their position in a society.
The expectations, the longings of people are often contrasted with the indifference of the city and their longings seems like a subversion against the heart,- and meaningless social rules.
Moments of magic do not come as guaranteed. One has to look for it in nuances and often only in a few seconds, a gesture or in an expression in a human face.

Once they meet at Amar´s apartment. He tries to declare his feelings for her. For a moment their hands are folding into one another. But when Amar´s expresses his doubts if he is ready at all for a relationship, their hands are separating from each other suddenly.
There are moments of happiness, the many secret excursions at night or when they attending a shadow play. But they remain fleeting and unforgettable at the same time as precious cinematic miracles.
As most of the scenes take place at night with mostly sparse light, the film itself seems frail and often under threat to disappear into darkness. The dialog between Amar and Tara have the same frailty. They mostly talk very quiet and slow and before, between and after they talk there is always the presence of silence.
But in all its accuracy, in all its formal clarity - the film never abandons the longings and dreams of its protagonists.
Once again, by Kanwal Sethi, a film of the 21th century is not only a fine unique piece of contemporary Indian cinema. It carries as well the wisdom of the long history of cinema in itself and even more – it reminds us once again how important cinema is for our contemporary world.

For reading the German version of my review on Once again, please click HERE.

Posted by shomingeki at 4:34 PM