Memories of a paradisiac summer at the cinema - 303, by Hans Weingartner, Germany: 2018 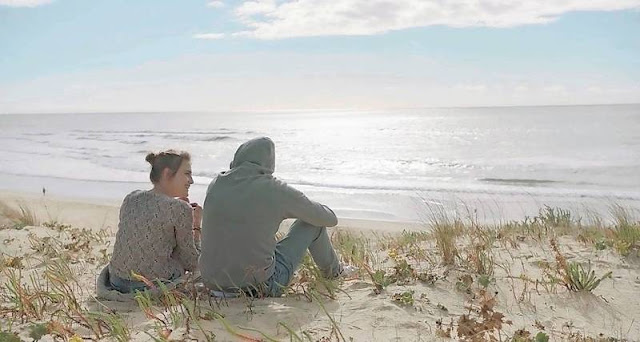 “These are things, that we discover when we walk through the world far from home: when we learn about other peoples live, we begin to see our own in another light.” (From the novel Go bridle the Storm, by Joan Aiken)

It was a strange intuition I followed when I saw the film the first time in one of the most beautiful film theatres in Berlin, The “International”. I have not expected that the film will mesmerize and move me like it did. And it occupies still my mind. I just had to watch it a second time.

The film is among so much else a Road Movie, those genre mixture which is not always easy to define. These films are often the journeys (the geographic and the mental ones) they show and tell about. First of all, they evoke in me memories of journeys I once made, like for example endless car rides with friends in France and Canada. At the same time those films have always to do with my love for cinema. Often there is a train, a bus, a car or like in 303 a camping bus which are metaphors for the devices cinema is made and finally projected with. Of course at the beginning there are at first the personal memories which are evoked in me. This happened at a time when both of the actors were not even born yet. The old camping vehicle is about 30 years old and it connects me with these young people who could have been my children.
This strange feeling of expectation before a long journey, the promises of freedom and countless opportunities came back to my mind and it made me during watching this film about 30 years younger. The film and it´s metaphors for the devices which made the film possible turned for me into a time machine – not only in that what the film presents in front of my eyes but also in that what it evokes in me.

There are a lot of dialogs in this film. Mr.Weingartner composed these dialog out of hours of video interviews he made with young people over years. This is well documented in several interviews with the director. The dialog are specified like a frame which never appear static. They do not occur artificial but like thought, felt and finally spoken by the actors. It is the same with the journey, which must have been planned and prepared as much as it is possible, unavoidable changes included. But here also, the effect is contrariwise. It seems that Mr. Weingartner has outlined some certain situations after that the film seems to move by itself:


303 reminds me sometimes in another great Road Movie from India, Aparna Sen´s Mr. And Mrs. Iyer. Both, Aparna Sen like Hans Weingartner cultivate a very playful and reflected use with traditions, rituals and conventions of Road Movies and develop very soon their own personal signature, which is by the way totally free of an anthology of quotations. Film history is never exploited in these films. It is like a very multi layered dialog of the films with the history of where they came from and the specific present it reflects and where it is finally made for and they deal about. That is the reason the films like Mr. And Mrs. Iyer and 303 appear despite their fictive narrations almost like living organisms. These film are accumulating their wisdom through experiences and not through an imposed cleverness. Like I mentioned – beside so much ideas and thoughts about the world covered by 303 – the film can be as well a subject for philosophizing about cinema.

The streets the camping bus is driving on is frequented untold times, the landscapes passing by are seen countless times. Almost each of us knows this special feeling during a long car ride. 303 achieves in some moments to to bring back this wonder which is stored in my memories. Landscapes places, cities, villages are concentrated to magical cinema moments and there are quite a few moments which turn me again into a wondering child. And quickly I reach a point where I follow the film with unconditional confidence.The film leaves me in this strange mood between being awake and dreaming. One is receptive for all the wonders the film is going to offer.

There are long conversations between Jule and Jan, (some of them very controversial) about the alienation caused by capitalism, the Human Condition from the dawn of men until today or about the mental and seemingly biological mechanisms of love. But sometimes they tell about themselves and fragment by fragment the mosaic of these young human lives is pieced together. The body language of these young people becomes more and more easy and relaxed. The spoken language and the nonverbal one is complementing each other. It is like eyes and ears are opening for the world, the world like it appears on the screen but which is also tangible beyond the borders of the film image. Some conversations are serious (and often shot in longer sequences), some of them are very playful and funny. But they are always authentic and there is not even a trace of an ironic distance. Just the aspect how the young actors Anton Spiekers and Mala Emdes characters are approaching each other belongs to the cinematic adventures of this film. And when the evening comes it is time for having dinner together and it is time again for telling each others stories from their lives. These moments have something native, they refer to the old need of people to tell stories about their experiences, about their lives. In 303 such moments almost appear as mythic moments which we know from the long history of cinema. Ordinary moments are often poetically compressed in this film. It seems they are turned already into memories of a lost paradise.

Sometimes the film interrupts these closeness between us and the film characters. These are small moments where the two protagonists are eluding themselves from us. Once we see them sitting on a bank from behind, another time again from behind when they stand on a rock and looking into the mountain landscape. They look at these landscapes like at an imaginary screen like I know from the films by Aparna Sen. In such moments they seem almost as anonymous like the other spectators sitting with us in a film theatre some rows in front of us. At the same time we have a strange feeling about their autonomous existence independent from us and the 145 minutes of the film. The charme and the freshness of 303 is obvious, But there are always moments which appear to me as poetic reflections about cinema.

A wonderful moment which seems to me very characteristic for the somnambulistic beauty of the film. It is the scene when Jule and Jan are visiting anywhere in Southern Europe a cave of the Cro-Magnon men in which prehistoric cave paintings are preserved. We remember that Jule often referred to the Cro-Magnon man in their discussions on the Human Condition. Now we gaze together with these young people the wonderful paintings. This is an incredible scene. Here the film presents what we experience together with the protagonists. They look with us at the origins of images, people made from their environment. The cave paintings become a screen into a screen. We see not only the young people contemplating this miracle, this moment becomes a pure miracle of cinema itself – and it will be unforgettable.

303 is also a film about a growing friendship between a man and a woman. There are, of course, moments of eroticism and amorousness but they remain options among others. These moments of amorousness and eroticism are fine scattered and sometimes they give only a slight idea of it. Another aspect which reminds me in Aparna Sen´s masterpiece. The exchange of glances between Mala Emde and Anton Spieker are very balanced. They never become objects neither of our gazes nor the gazes they give each other. It is often especially this “Boy meets Girl”-element which goes in films often and quickly out of balance. And sometimes Mala Emde´s performance reminds me in Konkona Sensharma´s one in Mr. And Mrs. Iyer. It is evident especially in these glances which are telling so much without words. And it is just another reason why I consider 303 as the most beautiful Road Movie since Aparna Sen´s film.

If the film were an hour longer, I would not have noticed it. And finally the only thing which is irritating me in this film is the simple fact that it has to end anytime. It is not necessary to reveal the end of the film. The only thing I can say, the film fulfills everything it promised in its first minutes. The whole film seems to mediate a peaceful coexistence between that what the film is about and that what it can evoke in us. Like I mentioned, 303 is a film about possibilities, possibilities in human relationships and possibilities to move and change oneself. And I can´t get rid of this strong feeling that the film shows very impressive what is still possible in cinema.

At all, this single pleasant memory of the summer 2018 will stay with me: the film 303 by the Austrian filmmaker Hans Weingartner. 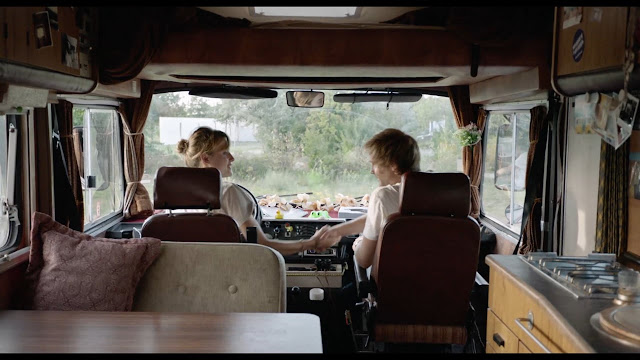 Posted by shomingeki at 1:11 PM No comments: