shomingeki will be released online. 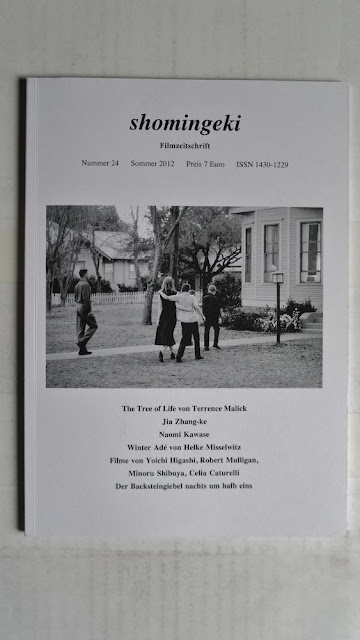 Almost 6 years has gone by since the last print issue of my film magazine shomingeki was released, if I am not wrong it was August 2012 on the front page a still from Terrence Malick´s masterpiece The Tree of Life. After years of thinking how I will continue shomingeki, I finally came to the conclusion to replace the print issue by an online issue. A new web space is already rented. The text will be in German but if there are English version in existence they will mentioned in the Table of Contents.
The release date is end of May. I still wait for some texts, but latest May 28, the issue No 25 will released. The site shomingeki-online is already in the net but the contents are hidden until the release date. My other website shomingeki.org and at least my English blog will continue to exist.

It is not that I closed the print publication of my magazine which was founded in 1995 without regets. I have grown up in the age of print issues and as long as I am alive I never will buy an e-reader and if I find an interesting text in the internet, I still have to print it out. But it is still a question of what can I afford and what not. The print issue became a luxury for me and despite a lot of generous donors, despite mostly very good receptions, it grew far above my financial options.

And it is not that I do not feel bad for some very loyal subscribers. I feel like apologizing to all of them.

As often as it was mentioned, shomingeki was never a special magazine for Japanese and Asian cinema. The fact I published a lot about films from these country has to do that the weight of masters like Ozu or Hou Hsiao Hsien in world cinema is beyond dispute. But I can hardly sell myself anymore as an “expert” of Asian cinema anymore. Just alone in my country there are people much younger than me with a far more profound knowledge about Asian cinema, a fact which I acknowledge with joy.

The online-version of shomingeki will be gratis and without ads unless there are films or projects which are worth to support. Print exemplars of old print issues are still available for the original price.

But I resist to continue shomingeki as if nothing has changed. In these six years I experimented a lot with blogs, I realized that an online version will be rather a new begin. The good thing is I do not have any idea about what shomingeki will be publish in the future. I am happy to say that my experiences with such different masters like Aparna Sen, Terrence Malick, Clint Eastwood, Anjan Dutt, Christopher Nolan, Bill Mousoulis, Anamika Bandopadhyay, Pushpendra Singh etc. Made my passion for cinema harder to predict than in most of the good old print issues. I learned in these 6 years that without an always refreshed curiosity and without trying encounters with films totally unfamiliar to me, the whole love affair can become very stiff and rather imposed than really felt.

I remember the day when I finally choose to continue shomingeki only as an online issue. It was a Sunday afternoon. I was happy to have finished this long years of agony concerning my film magazine and rewarded myself with attending a 70 mm-screening of Lawrence of Arabia in the wonderful new restored Zoo-Palast in Berlin. It was not only the glory of this format, it was as well after a long time I attended an analog film screening. And sometimes cinema is as well often about what we have lost or what we are in danger to loose. 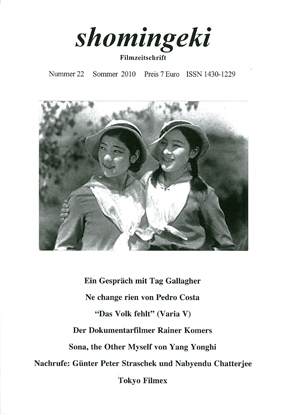 Posted by shomingeki at 3:34 PM No comments: