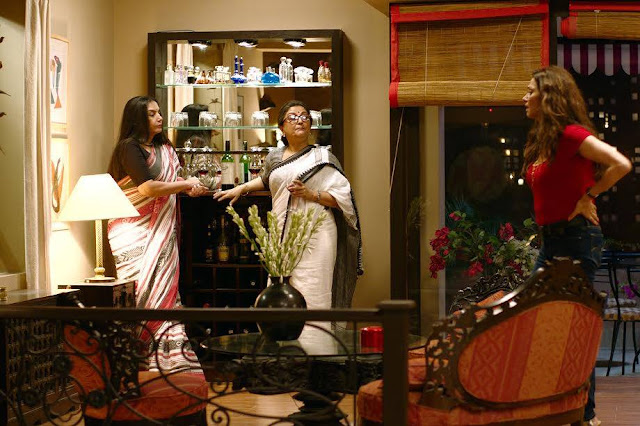 The reason why I think it is important to talk about the films by Aparna Sen is simple: her films and especially her recent films made in this decade are an impressive demonstration what cinema is still capable of. Despite all obstacles of our time, the fast moving public world of cinema, the lack of diversity in the selection of the mayor festivals - her creativity remains unbroken. That she has not got the recognition for her more recent films is nothing less than a shameful injustice.
Her latest film Sonata is for me another example why I consider Aparna Sen as one of the most sophisticated film directors of our time – and not only in India.
Sonata, a film which Aparna Sen called a “chamber piece”) offers just in the first 10 minutes more cinematic ideas and poetry than another “chamber piece like for example Louis Malle´s My Dinner with André in its full length.
The space where Sonata takes place (a big apartment in Mumbai) is from the first shot a pure cinematic space. The film is based on a play but it is an adaption for cinema like only Aparna Sen is able to do in modern cinema. Anywhere between Ozu, Dreyer or Hitchock´s finest “chamber piece” Rear Window, Sonata stands for a another kind of pure cinema.
How the two main characters are placed in this apartment, how they move in it or how they define or redefine it as their private space has indeed to do with the virtuosity how people in their interiors are revealed in films by John Ford or Yasujiro Ozu. How they claim their place in Sonata in this place is often as well an analogy how they define their place in the world. The apartment in Sonata has it´s barriers from the world but as well openings through which it is connected with it. The every day sounds from the streets are invading this private room. Some windows appear like screens and they are the visual pendant to the soundtrack. The inside and outside are interfusing each other.
The dialogues between Aruna (Aparna Sen) and Dolan (Shabana Azmi) are dealing at the beginning with every day matters and often mutual bantering. It is clear, this two women know each other for a long time. They share this apartment for 25 years. They know each others weakness. Sometimes they make jokes on the other´s cost about gaining too much weight, about the sexuality of two unmarried women and it can be from time to time as cruel like between the aging gentlemen in Ozu´s last films.
How they move differently in this apartment tells a lot about their relationship but as well about their different characters. Dolan actually owns this apartment. While Dolan is often walking around, sometimes even dancing, Aruna prefers a certain place on her desk writing on her computer , framed by big book shelves and her music collection. She is reserved, often retrieved in herself. Dialogs and actions reveal something about the characters but give also hints about what they hide. And even when they try to banter each other, there remains a strange contrast between elements of comedy and the awareness of vulnerability. We get small ideas about their losses and fears.
But Aparna Sen also introduces her characters in another way. We see often how they gaze around, or how they gaze at others. What does it tell about us when we gaze at the screen? What does it tell about the characters when they gaze at each other or at other persons? Aparna Sen´s cinema is always a cinema of glances. Once in this film, Dolan and Aruna are looking out of the window into a neighbour´s apartment. There is a lonely woman they have observed very often. They talk about the strange woman´s loneliness with a certain distance but one feels there is a connection between what they see and what they are. The window is one of the many hidden imagined screens in Aparna Sen´s films and these screens are often like mirrors

A third woman arrives for a visit, Subadhra (Lillete Dubey), a journalist. She is a younger woman and the only woman of this trio who is in a relationship. Behind sun glasses she covers bruises - her violent boyfriend has beaten her. Even though these are three distinguishable characters, they also represent different options of a human life. They drink wine and spend some time with laughter together. When Subadhra finally leaves , there is an echo left on the two unmarried woman who will question each others place in this world. A human life in a film by Aparna Sen is often composed of different options by different characters. It is a bit like with “the beings of time” in Marcel Proust´s On the Search for the Lost Time. Life appears here as a sum of an endless chain of decisions.

How explicit Aparna Sen uses the designed apartment as a cinematic space is evident in many aspects. This space changes often between the emphasis of the illusion of spatial depth and the reminder of the flatness of the film image. When the three woman are sitting on the couch, the space is contracted. In another shot the space is extended in three dimensions. Aparna Sen´s playfulness with revealing these limits and options of cinema is one example for her formal richness.
In the first shot of the film the space of this apartment seems clearly represented. It looks easy to find one´s orientation. But after a few cuts and different shots, we are nearly confused. There are doors which remain closed to us and from different perspectives this apartment looks much more complex than the opening shot suggests. How we define our orientation in this piece of cinema, how Aruna and Dolan define and redefine their place in the world is revealed in pure cinematic esthetics.

Only a few other characters have short appearances, a friend Mira who has chosen a female identity after a gender reassignment is only visible during a skype-conversation and during a mysterious phone call. A drunken man in front of their house and finally the former lover (Kalyan Ray) of Aruna is visible in the only flashback in this film. There is a strange contrast to the real time image of this skype conversation and this engrossed image of a memory.

Sonata offers as well one of the most sophisticated sound tracks in Aparna Sen´s work. The interweaving of every day sounds in the apartment and the street noise from the street separate and connect at the same time the apartment with the world. The music score by Neel Dutt is another aspect of this playfulness which reminds me in Ozu´s last films. We remember when Aruna listens to Beethoven´s Moonlight Sonata. If I am not mistaken it is after this moment when Dutt´s music begins. First paraphrasing, later adapting certain moods in this film like for example a frolic dance by Shabana Azmi. But sometimes the music appears suspended in air between authorial music and a strange mysterious melancholy which is hard to describe but which will be confirmed at the tragic and disturbing end of the film. In contrast to the characters, Dutt´s music seems to move independently from the laws of time and space.
After all what I hear, read and see, the conditions for cinema in India different from the commercial Bollywood industry is not very convenient at all. That applies for the the contemporary masters of this country as much like for new talents, not to mention India´s disastrous handling of its own film heritage. This is one reason more to consider each new film by Aparna Sen as a precious gift to cinema.