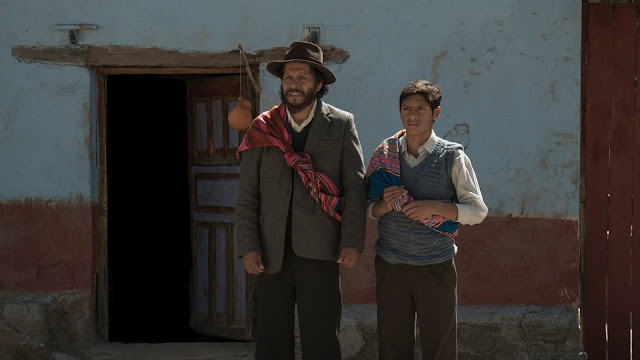 First of all this is a film, framed often by doors and windows and it offers some time a glimpse to the eternal world and sometimes to a world defined by frames and borders.
At the beginning a group photo of some villagers will be made. The father, a respected artisan who makes altar pieces for churches and little figures made out of clay for tourists has blindfolded his son who is now describing the group of villagers in details to test his visual memory. The colours of their dresses, the woman with the baby in her arm, he recalls details he need for creating an effigy of it. In this very first shot one gets an idea of Aparicio L,´s visual sophistication.

Retablo is not only a film in pure film images but as well a reflection about film images as well. To experience glimpses of reality and to look at the reproductions of it, this is a theme which goes through the whole film.

Subtle but consequently the film leads image after image to the transformation of a contemplative world in the Peruvian Andes into a nightmare of violence and discrimination caused by a man made society. Segundo and his father do not create only well crafted altarpieces for the church and souvenirs for tourists but as well miniatures of tiny little clay puppets based on real villagers. The photo shot in the first scene is the model of a composition of many tiny clay puppets, arranged like on a miniature stage and framed by a wooden box. There is one of the visual most impressing moments of the film: the father and Segundo contemplate their work of art. We see them open the wooden box, their eyes in amazement. Behind them a window framed the landscape and it is like we see both of them staring like on a imagined screen and at the same time we stare over them to another screen. A crossing of two glimpses in different directions. The characters and we, each of us witness how someone sees something. Retablo is indeed a film about seeing.

Retablo seems to be a film about two possibilities of cinema, the recording of a real piece of the world but as well the ability to create a reproduction of it. The impressing cinema scope photography between open landscapes and the emphasis of frames (the image format but as well doors and windows) and sometimes the ensemble of clay figures framed by the wooden box like a stage, always gives a hint to cinema itself. The old utopia of cinema to enable us to discover the world or “to define one´s own image of the world” stays here in contrast to a society which insist on archaic, patriarchic and stiff images of the world.
The actor of the adolescent Segundo, Beyar Roca supports the visual virtuosity of this film. As he mostly remains silent, his questions, doubt and his conflicted and confused emotions are all reflected in his stoic facial expression. It seems to be almost part of this wild and sparse highland environment.

The permanently increasing tragic tone of the film is caused by the father´s secret homosexuality. Once uncovered, he is almost beaten to death by some villagers. His wife abandons him, most of his work is destroyed. The miniature of the village community made out of this tiny clay figures now appears as a hateful, angry and violent mob, the treacherous security of a community turns into a nightmare.

Retablo is a film about freedom but as well about its limitations, both visible in the things the film reveals like houses, doors, - and window frames or animal compounds but as well perceptible the film´s visual concept. Cinema seems sometimes breaks out of this borders and sometimes it reminds us painfully in the existence of these borders we are exposed to.

At the end we are literally left in these borders. Segundo leaves his house and his village to find another place to live and to perform his craft. We are literally left behind into the darkness of the abandoned house when he shut the door from outside, a darkness which is the final caesura between the film and the end credits.

Retablo, the first film by Peruvian Álvaro Delgado Aparicio L. Comes as close to a masterpiece as a first film of a young director can be. For sure, this is one of the finest new films I have seen this year at the Berlin Film festival – and like it happens so often to me – by a fortunate accident.
.