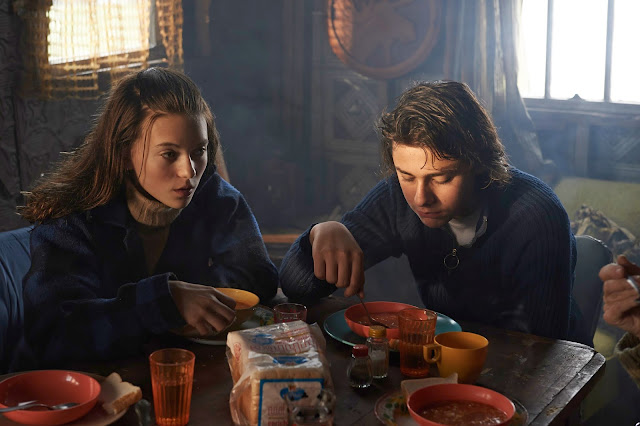 Compared with the more consequent auteurist cinema of Kamila Andini´s impressing Sekala Niskala (The Seen and the Unseen), Luc Picard´s Les Rois Mongols looks rather like mainstream and comes close what we consider as a typical children film. But I am fine with this, the children, - and youth section is always interesting in it´s diversity. Side by side one can find conventional storytelling (which is not by nature a bad thing) and rather experimental cinema like the film by Andini, I mentioned.
Picard refers in his film to a chapter in French-Canadian history which is still hardly known outside of Quebec. The film takes place in the 1970s in Montreal. A radical leftish movement for the independence of Quebec leads to violent confrontations with the central government of Canada. One of the most famous French-Canadian novel, Bonheur d´?ccasion by Gabrielle Roy takes place in St. Henry, a former slum quarter in Montreal during World War 2.
In the 1970s, Montreal was still dominated by the poverty of the french speaking working class. I have a soft spot for this part of French-Canadian history. The 1970s was the time time when a lot of my friends in Quebec lived their early childhood, youth or their live as young adults. My head is full of their stories. My late friend Claude Forget, an activist for Independent cinema told me about this time when Montreal was dominated by soldiers and tanks rolling through the city under Martial Law. My different friends told me a lot what it means to be French-Canadian. A cinematic time travel taking place in a city I often visited can´t leave me indifferent at all.
I even recognized some of the French pop songs used in this film, songs my friends loved in their youth. The main theme of the soundtrack appeared to me as a theme of one of these Quebecer folk songs which can be tracked down to the songs, the first French settlers brought to this once new world.
The Uproar in the 1970s was a big crack in the Canadian union and it is visible until today. In Picard´s film it goes even through families. Forty years ago, Quebec is still beaten by poverty, the social conscience was almost a monopoly of the Catholic church.

The two families, the film is telling about are consequently members of the working class. The young girl Manon´s family is affected by the deadly sickness of her father. The mother is unable to cope with this and Manon´s brother will be sent to a foster family. What will happen with the adolescent girl remains unclear. The other family, is even more split. It is the family of her cousin, a teenage boy, a little one and a grown up young man who sympathizes with the radical group FLQ (Front for the Liberation) and that brings him in conflict with his father. As much as the films spins it´s fiction from this background between drama and elements of a crazy comedy, the fiction sometimes correspondents with the historical background and sometimes it peels away from it. That is necessarily not a disadvantage of the film. During watching this film and days after it, I felt I had two films in my heart, a film about a historical problem which is not solved today and a narration about individual characters exemplary for the forgotten and nameless people who were exposed to the impact of history. Do these two elements are going always together? Probably not, but the tension between history which had an impact on this culture and the conventions of mainstream storytelling is at least interesting. The film has an unusual bitter end anywhere between Chaplin´s Modern Times and Truffaut´s The Quatre-Cent Coups. The characters who suffered under historical circumstances are fading away in their anonymity this injustice of history.
When the film in it´s last moment gets finally rid of all it´s fiction, the after taste of unsolved and unprocessed history – than it appears not anymore as mainstream or conventional as it looks on the first sight.

To speak about the slightly rising presence of French-Canadian cinema on the Berlinale, I can´t hesitate to recognize an irony. If they were some films who broke ground for a wider interest in this very interesting film region than it was some films screened in the last 11 years by true independent filmmaker like Catherine Martin, Richard Brouillette, François Delisle or Chloé Leriche (whose Avant Les Rues was screened at the Generation two years ago).