Notes on The Third Breast by Anamika Bandopadhyay, India/USA: 2017 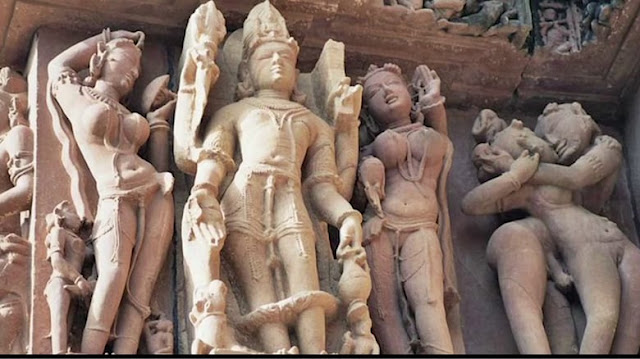 “If any thing is sacred, the human body is sacred.”
(Walt Whitman)

At the beginning, ocean waves on a beach in Goa, a popular region for Indians and tourists from abroad. The over voice commentary of Anamika Bandopadhyay tells about this place and the pleasure of drinking coconut water. She recalls the stories told by her grandmother. On the beach we see an old woman and a young girl with sun glasses. For a short moment it appears like an idyll evoked by a Marcel Proust- like memory and caused by coconut water, the pendant to the Madeleine, a French pastry occurring in Proust´s novel In Search of lost times.

The second part of the film´s introduction is a harsh contrast: News headlines report about the gang raping case in Delhi from December 16, 2012 which lead to the death of the victim, a young woman. Images of angry protesting Indian women follow. In the following months after this tragic event a series of gang raping all over the country followed. The public finally took attention on rape cases even though they happened as well long before December 2012. It was evident that the perpetrators felt very safe without the fear being indicted.

Anamika Bandopadhyay mentions that there is no sex education (maturation curriculum) in Indian schools. Her son absolved it already at the age of 11 in an American school. The Indian government rejects the idea of sex education in schools because they say it is “against the Indian tradition”. In Germany for example (which is far from being a pioneering country in this case) sex education in schools was from up around 1975 already obligatory and no biology teacher could refuse to teach sex education anymore.
“What is the “Indian tradition” asks Anamika Bandopadhyay and her journey to different places in and periods of Indian history begins.

In the films by Anamika Bandopadhyay I have seen so far, it is impossible to separate the poet from the scholar or the human right activist. Like in her previous films Red (2008) and 1700 Kelvin (2012) she is completely involved.

The Third Breast is a film essay about the contradictions in the Indian culture history of sexuality. On one hand in modern India a total ban of sex in culture and education, on the other hand a brutal oppression of women. As rape is by politicians often underplayed as accidental events, it appears soon that it is caused by a misogyny deeply rooted in the history of colonial and post colonial India. With her questions, for example “What is the Indian tradition?, the filmmaker goes back to the distant past of India. Interviews with different people, scientists, activists or young students give hints to a deeper truth of “Indian tradition”. One of the essential elements of the filmmaker´s research is the comparison between a relatively liberal attitude towards sexuality in the medieval India and its absurd oppression in modern India. This ancient attitude or let me use knowledge of sexuality is documented in old texts, paintings, sculptures and poetry. At least the erotic sculptures in some temples in India are still accessible and proof this once total different attitude towards sexuality in this culture. Even without knowing KamaSutra, it is widely accepted that India has one of the oldest knowledge about the human body. As we experience in this that sex has quite a lot to do with “Indian tradition”. Bandopadhyay works with different elements, the interviews, collage, images as evidence but often as well with a certain playfulness. Beside the researches there is always as well the element of the experience she made during her journey, a reminder that she, the filmmaker is always a part of the complex history she reveals in her recorded images.

The texts by Geet Govinda, the erotic sculptures in several temples which depict sexual practice or even old texts which describe the sexual relationship between the “iconic” Indian (unmarried) lovers Radha and Krishna are in existence. The film is also a confrontation of images, the ones of a relatively liberal sexual moral in the past and the hypocritical images of the present moral of in post colonial India which are established today. And in this confrontation of dominating and suppressed images like established and suppressed ideas of humanity, Bandopadhyay uses one of the most important nature of film, the presentation of images.
She also integrates small episodes where she appears in front of the camera.
In one of them she explains a souvenir seller in Varanasi an object that he has in his collection symbolizes the penis of a Hindu-god. That disturbs not only the seller but as well a client is refusing to buy it.
Even among a group of open minded young people the image of a naked goddess displaying vagina and breasts causes for some of them feelings of discomfort. Paradoxically the tradition of India appears for some contemporaries as something very strange and exotic. Parents,tells Bandopadhyay, avoid to visit with their children these temples with erotic sculptures.

One of the aspects I value most, is that Anamika Bandopadhyay despite her involvement in the subject appears never predetermined and it seems we even witness with her a lot of discoveries she made during this journey. Her questions are punctuating the film and bring us closer to a truth than hasty answers.
There is, for example a moment where it is mentioned that the menstruation was in ancient times regarded as a sign of purity of a woman. Temples with statues of naked goddesses were closed for four days a month when the goddess “menstruates” Later , the menstruation as a symbol of purity and even divineness was distorted into a sign of impurity and these temples denied access for menstruating women. What changed this attitude? One hint mentioned in an interview is the fatal combination of the prudery of the British colonial rulers and the prudery of the Brahmin cast. For a long time the tribal culture was relatively uninfluenced by sexual moral of India. Tribal women had more freedom to choose and separate again from their partner. But even these last traces of a different India seem to have disappeared. Another offered explanation is the rise of a Right wing movement which originated in the 1930s and which took its inspiration from a distorted Hindu-ideology and which includes the vilification of women and the discrimination of lower cast people.

The Third Breast offers different accesses to a certain aspect in Indian culture history and it gives an idea about the complexity of this country. Despite its analytical aspect there is also the “caméra stylo” - element. It is an insight and the film does not leave one moment of doubt that it is made by a woman from its culture. Like the incredible trilogy on the partition of Bengal by one of her spiritual mentors Ritwik Ghatak there is a relationship between the global history and how it is affecting the person who tells us about.
The filmmaker´s questions open the space for new perceptions. Even if she blames religious fanaticism, The Third Breast includes not a statement against religion in general but points out against misuse and distortion Her films are never made with this smart predetermined “I know it all” attitude. That let her appears literally “Unarmed” and vulnerable. The moment when she tries to comfort one of the abused women in Red , illustrates what I mean quite accurate.

Once we see her in an alternative temple called Devipuram, founded by an atom physicist. It is a temple where women are worshipped and we see her washed by temple servants. It is again one of the protected zones for women in this film. At the end we see again the old woman and the girl with the sun glasses on the beach a poetic image for a memory and another of these “protected zones” in this film, where oppression and abuses of women is suspended for a short while. This moments reminds me in a moment from one of her previous films Rough Cut, actually the only moment from this film ( which is probably lost) available for me. Only about 5 wonderful minutes are available on Bandopadhyay´s YouTube channel. A man and a young girl are in a temple. The man is painting or busy with a maintenance of one of the sculptures. The girl stands in front of a naked goddess. On her toe tips she stretches her body to touch the statue. She is measuring the size of the artificial body, touching its proportions and compares them with the proportions of her own. Her actions are like unspoken questions. Whenever I have to articulate my appreciation for Anamika Bandopadhyay´s films this fragment comes to my mind.

At the end of The Third Breast, the filmmaker reveals the story of the goddess Meenakshi as told by her grandmother. Meenakshi is born with a third breast. The parents were worried about this “deformation” and raised her like a boy. Some consider it not as a deformation but an extra of erotic appeal or strength. The film ends with the image of the old woman and the girl with sun glasses on the beach in front of the ocean waves. They are at the same time exposed to a natural force but the image is one of these “protected zones”. A fleeting moment in a film which told us so much about a disturbed world where women have to struggle to assert their space.

The Third Breast is another example for a “committed “ cinema which is full of compassion, anger but also tenderness without giving in for a second to any kind of sensationalism. I feel confidence in these images which appear to me as documented of true encounters, true experiences and true reflections. 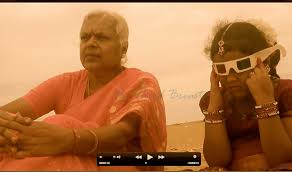 Posted by shomingeki at 3:07 PM