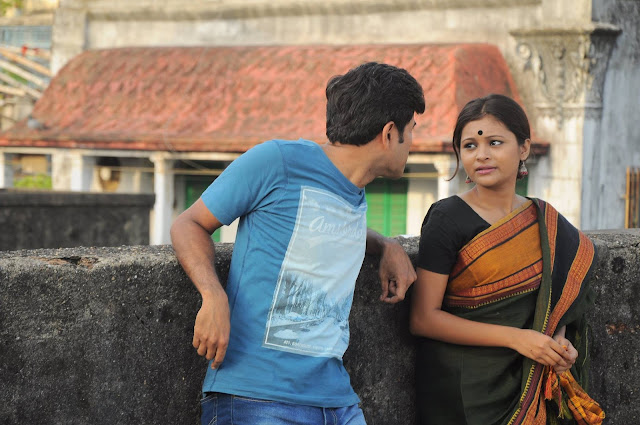 It comes again to my mind why I consider Indian cinema as one of the most vibrant ones of our time. As the glory of the past of Indian cinema once appalled the dominance of a mostly Euro-centrist film historiography, it´s exciting present is often ignored by the so-called big Film festivals. Some Indian short films I saw recently reassure myself in appreciating Indian cinema which is just not very much trendy and obviously not in fashion among the majority of festival programmers but nevertheless at least as exciting as interesting than films from Iran or China which frequent all kinds of European film festivals.

Trapeze is a 13 minutes long nightmare but one of these nightmares which feel to real to be forgotten soon. At the beginning, a surreal image of a road traffic which moves backwards. A young man called Sandip receives a phone call from a friend who told him that he is is arrested for murdering his fiance. From one second to the next the world of Trapeze is split into two parallel worlds. Radio and television report without cease about violence and terror attacks. When Sandip takes a shave, a pure every day action, the sink is suddenly filled with blood. To distinguish what is imagined and what is real, becomes difficult.
There is a scene when Sandip fights with his fiancé Ipshita, if I remember correctly, about religious fanaticism in which Sandip is involved. On the surface a mundane quarrel between a couple. The violence is subliminal in this scene filmed in close ups and it is visible in the angry and almost hate filled face of Sandip. An every day quarrel between a young couple or is it already a hint to a fathomless drama? As the images also the soundtrack moves from seemingly mundane sounds to distorted and alienated ones.
Later, Sandip encounters in a cellar-like room a strange clown who seems to be in his viciousness a close relative to Heath Ledger´s Joker in Christopher Nolan´s The Dark Knight. His gestures are like an even more cynical variations of Chaplin´s “The Great Dictator. No one can escape his horrible laughter. In front of him, we recognize Ipshita´s corpse, her throat cut open.

Mundane living rooms turn into catacombs of fear and guilt, ordinary people into monsters of hate.
Trapeze is a miniature filled with old and very primary motives from the history of cinema, for example the “Doppelgänger”-motive or the split personality in the fantastic films from early German cinema, the Dr. Jekyll and Mr. Hyde-theme, but also the motive of real and imagined murder in Hitchcock´s Strangers on a Train. And like Hitchcock, the terror grows in every day objects or between every day actions. The world we inhabit turns from one moment to the next into a scary place.
The news about violence there and then invades the here and now. The recent history of violence and terror attacks has arrived the living together of what we call civilization.
The film is always most disturbing in its transitions from what we call mundane life and the nightmare mankind finally create. I refer here to an end ,a seemingly happy ending” which returns with one single cut to the nightmare again we want to escape and what the whole film is about. If we thought we “wake up” from a nightmare, we realize that we are still in the middle of it.
It is still amazing that a 13 minutes long film can be much more though provoking and affecting than all the news shows in the world. What remains, is a memory of a weird dream in which we try to hold on certainties which always blur into doubt.
Trapeze is like a shock wave. The news on violence and here the terror attacks in France finally have reached the private and more intimate space. We see Sandip often running through narrow lanes. There is no real escape and there is no real escape from the nightmare the film evokes. Last but not least, Trapeze is an exciting fusion of experimental cinema with interwoven genre-elements.

Posted by shomingeki at 2:23 PM