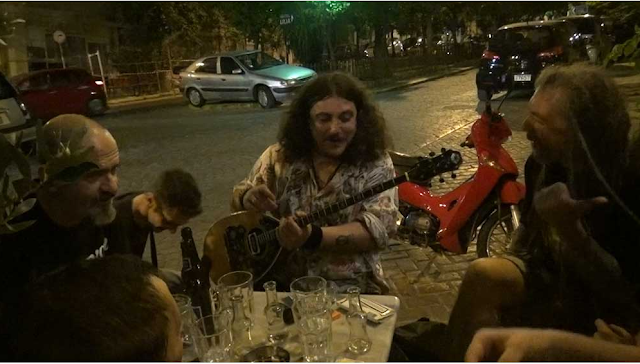 After having seen 5 films by Greek-Australian filmmaker Bill Mousoulis, I think the transitions between documentary and fiction in his films are always very thin. His new film Songs of Revolution is a journey through different kinds of Greek music, the connection between these different kinds and the history of Greece from the beginning of the 20th Century until to date. The film begins with an audiovisual collage. Different TV channels propagating the false dreams of commercials and the nightmares of recent Greek reality. The first song (Enough), a Punk song appears and we see images of manifestations. The non-filtered anger of this punk song connects with the image of the naked anger of the people. The first disturbing moments hint to a reality of people who are struggling for surviving between anger and sadness. The pseudo reality suggested by Neoliberalism and its instrument Television between political filtered information and commercials is busted.

The film introduces different kinds of music from the Remebetica (which is called the Greek Blues), the protest songs of the 1960s and 1970s, Punk and other alternative forms like Rap and and experimental music of recent times. This happens in interviews with musicians, recorded concert excerpts but also with arranged musical-like scenes. The interviews with musicians give an introduction how Greek history of the last 100 years is connected with the music as the expression of a long history of suffering from the occupation by the Great Turks, the German occupation during world war II., civil war, dictatorship and finally the most recent crisis. One can use it as a kind of orientation in this film, but how the film proceeds it will offer very different accesses.

Bill Mousoulis never really makes films just “about” something, he looks at something but often also reacts on what he sees and interacts with the people he meets. And this transition from documentary to fiction, this balancing act between fiction and reality happens sometimes sudden. There is a young musician whom we see at first working in his band. Later he offers a musical-like performance as a waiter in a restaurant.
Another musician quarrels with his parents. The dialogue of the persons are stylized like a rap song. This might be a hint to the difficulty of nonconformist musician to survive but it is also a good example for the playfulness of Bill Mousoulis who moves freely between documentary and fiction. Later we will see actors staging songs which are sung by others.

The image making devices called cinema as used by Bill Mousoulis seem always to overcome over it´s cold technical precision. Even this balancing act between reality and fiction seems rather organic than arty. Mousoulis always tries to get his “instrument” his image making devices always in accordance to these different kinds of music. Songs of Revolution is not only a great music film, it becomes often like music itself.

Among several musical-like scenes there are 5 songs which appear in the playback method. They are sung by another singer but staged by actress Marianthi Koliaki. During some songs she moves her lips, pretending to sing. During other songs she paraphrase with her whole body the stories told in this songs. Even with this cinematographic trick, Mousoulis creates an own veracity. Koliaki´s heartbreaking performance reminds me in Madhabi Mukherjee´s likewise staged songs in Ritwik Ghatak´s masterpiece Subarnarekha. The tristesse of the urban landscape where Koliaki is walking through, the synchronism between the sadness and the longings in the songs and her body language is breathtaking. It is one of these moments where the film becomes a song itself.

Another moment and a completely different stylistic approach: A musician meets a very old musician. He tells him how much he admires him and that he wrote a song dedicated to his elder idol. Than he performs the song. Even though in contrast to the staged song performances, this seemingly just documented scene has it´s own beauty and yes – it´s own poetry. It is also an example how versatile the film tries to approach all these different kind of music. The rage of scene with the first punk song in this film is edited in furious hard cuts. Other moments, especially the interviews are observant and comparatively sober. The musical scenes, the fictional element complement the other aspects and I would like to call them as moments of “magic realism”.


One of the most fascinating aspects in the films by Bill Mousoulis I have seen so far is this dynamic relationship between moments when his films are “made” and these moments when things are just happen in front of the camera. I mean an equal intensity of moments when Mousoulis uses the options his apparatus offers but also moments where he seems just recording what is in front of his camera. There is a scene when several musicians including a female singer are meeting in the evening at a street cafe. One of them introduces the other musicians to each other. Everyone brought his own instrument and soon they play music together. Even though it seems to be one of these moments which “just happened” and even though it is one of these observational moments, for me it appears like a moment of pure cinema, different than the tour de force of this lost soul personified by Marianthi Koliaki but with the same intensity.

Like so much good films, Songs of Revolution is also like a journey-experience which evokes in me so much different and sometimes contradictory moods, thoughts and emotions. The sadness, the anger, the bitterness of people who live under difficult circumstances but also their vitality appeared for less than 2 hours film in all its intensity. Songs of Revolution is one reason more to be grateful for this quite fortunate coincidence for me to get in touch with the films by Bill Mousoulis. 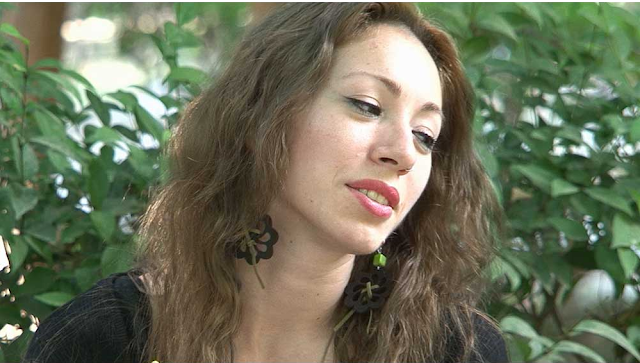 As the film is new, informations can be found at the Songs of Revolution-web site and at the homepage of Bill Mousoulis.