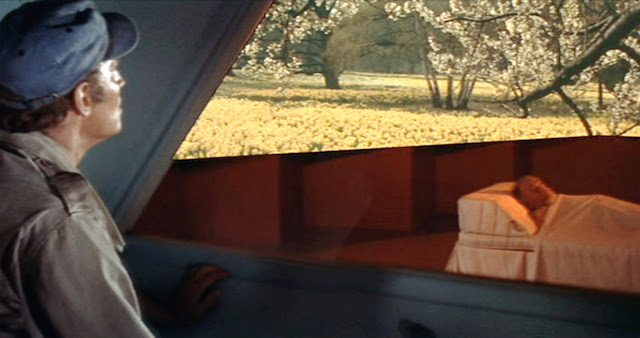 I have seen this film more than 40 years ago. What brought it back to my memory was a small note by German director Christian Petzold on a DVD cover of another film by Fleischer, the Jules Verne-adaptation 20000 Leagues under the Sea (1954). He writes, “in Fleischer´s films we see often people in front of windows in front of screens. They regard something which is lost. Innocence, nature, vastness, beauty.” Than Petzold mentions a scene in Soylent Green where E.G.Robinson sees on a screen images of nature and animals which are in this science fiction dystopia already extinct. In the moment Robinson sees the beauty on the screen he dies.
I owe Petzold´s note not only that I rediscovered this film for myself – even more – his note brought back a certain feeling I had for this film more than 40 years ago even though I was not able yet to express it in this beautiful almost poetic terms.

Soylent Green is often considered as one of the first ecological science fiction films. It includes also one of Charlton Heston´s last great performances like in Schaffner´s Planet of the Apes (a film which is really missed in this retrospective) The world is already in the last phase of it´s decay: overpopulation, dramatic lack of enough food and water. Simple but efficient, Fleischer uses lenses which give the film a greenish look of decay. Thorn (Charlton Heston) is a police officer, a cynical man who tries to survive but also tries to make his job as good as possible. His assistant ( this profession is called here “police book”) is an old Jew called Sol (E.G. Robinson) Sol is old enough to know the world how it once was. Terms like “police book” or “furniture” for women as comfort slaves for rich male tenants of luxury apartments are hints that in this dark future, most of people are reduced to functioning objects, a hint which gets (as the film proceeds) a much more gloomy meaning. The food companies are the power of this desolate world. A powerful member of this company is murdered. At first it looks like a robbery but Thorn finds out that there is more behind it and that this victim knew the secret about the food company which produces indefinable stuff like Soylent Green and other stuff to feed the hungry masses. And it is Sol who discovers the horrible secret from what this food is made of. He consults the “exchange” a kind of library for all police books. Sol can´t deal with the truth and goes to an institution where people who want to die get the poison injection and a last moment of happiness. And here comes the most intense moment of the film. Thorn finally finds his old friend, but the old man is locked in a room and Thorn looks at him exactly like a film projectionists from his cabin. The light is orange and on a big screen Thorn and Sol see with tears in their eyes all the glory of a world which is already destroyed forever. It is indeed one of the strongest moments in Fleischer´s work and the most memorable one in the science fiction genre in the 1970s. How extreme beauty and extreme horror and tragedy are colliding here – that is almost unbearable And even more important it is from a film which seemingly never intended to be more than a genre film. But it is an idea strong enough to carry a whole film.The images he sees are like the memories of a dying man. Before he dies, Sol whispers something to Thorn what we can´t understand. Later Thorn follows secretly the truck whoich transports the corps from this institution to a faraway factory. Finally Thorn realizes the connection between funerals and food production. We don´t know  if Thorn (heavy injured at the end) is able to persuade his superior of this secret or not. Beside the science fiction element, the film becomes a kind of Film Noir. It is a vision of a future with a hidden auto-genocide (like The Time Machine or Logan´s Run), one of the many visions where more or less big companies are representing the political power (Alien or Blade Runner) and last but not least the film is made in a time where something like ecological awareness began.
Well, I can´t say I am very happy with the selection of the whole retrospective. Many films are missing and many films I would not have chosen but Soylent Green is film which deserves to be discovered again. Most of the films in this retrospective are screened in 35 millimeter-prints.