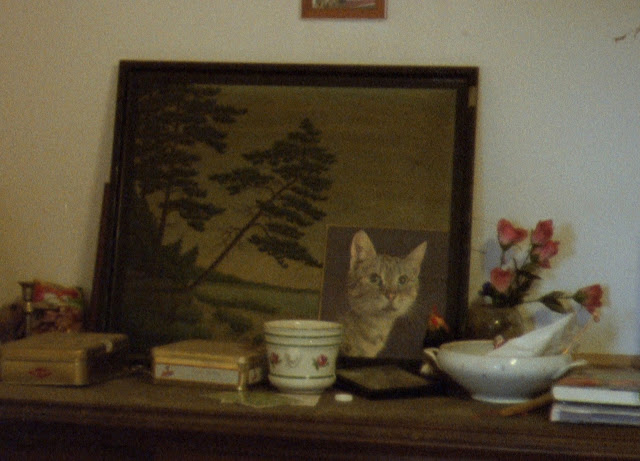 An almost deserted farm in Northern Germany: An old man, Willi  lives here alone with his cat, some chicken and some geese. He has survived his wife and he intends to spend the rest of his life here in loneliness, a loneliness which will be interrupted occasionally by visitors. With the help of a walking frame he still walks on his property for feeding the animals or just contemplating the irresistible savaging of this men made landscape. He often talks with his cat, his only companion. The part of this film which could be considered as a portrait of this very old man is very discreet if not of an “Ozuesque” respect. Beside the human landscape Willi, the film includes a meditation about the landscape of the environment which marks the border of this man´s living space but also it´s tie to the whole world. The cat is always present. Even though there are very charming moments with this cat which will warm the hearts of every unconditional cat lover (we hear the cat´s purring ans snoring), the strong presence of this animal goes far beyond a certain cuteness. It rather reminds me in the presence of so many animals in the Japanese Haikus.

The attitude of the filmmaker is sometimes evident in the things they reveal in their film. There is a moment when Willi  takes the cat on his lap. He caresses the cat very softly and when the cat tries to get free he let it go at once.

The film is recorded in 16 millimeter and Super 8 material, some images are coloured, others in Black and White. Sometimes even the buzzing of a camera is audible. The presence of the device which records these images and sounds is a hint to the modesty of a film which does not want to be more than giving an image of a human life. Sometimes the film turns into darkness (caused by the end of a film reel) and the soundtrack continues. In other moments there are scenes without sound. If intended or not the the evidence of the ability and disability of the cinematic devices to reflect a human life enriches the film with a strange poetry.

There is the change of the seasons visible in a landscape already abandoned by men and which will be soon reconquered by nature and the house as the evidence of the presence of men. There are a lot of still lifes shot in the rooms of this farm house. Despite the absence of men, these images are revealing crystallized traces of them. They have lived here. The perceptible decay of things which have a meaning for a human life seems to be as mortal as life itself. The hints evoked by these images might be very subtle but they will remain in my memory. The calmness of a film (which we learnt
from Japanese cinema) can be sometimes very evocative, often moving and not seldom even heartbreaking.

The presence of this old man and his animals and the awareness of these image making devices have a strange chemistry. The moments of “actions” with the old man and his cat or the fragmented stories he tells from his life are often alternated by absolute silence. How much really happened in this film on “Non Events”, I just begin to realize many hours after I attended the screening.

More than 20 years ago I once wrote on Ozu´s Bakushu (Early Summer) that “ the film (Bakushu) is like human memories compressed to 2 hours film. It is like memory itself depending on a body which has to die some day”. I was referring to the insufficient preservation of the original analog source of this film.
Since than I always see an affinity between the analog chemical process of film recording and the biochemical process of human memories depending on a living body. This idea came back to my mind after i saw Aus einem Jahr der Nichtereignisse.

The morning after I saw this wonderful film, the memory of it is still strong and present with a mixed feeling of happiness and a light indefinable melancholy. That is an unmistakable sign that I must have fallen in love with a film. There nothing more I can add for now. There is only one thing I am sure about: From a Year of Non Events by Ann-Carolin Renninger and René Frölke is the most beautiful film experience I made at this year´s festival.