Notes on an afternoon at the Zoo -Palast with a masterpiece called Loving Lorna by Annika and Jessica Karlsson, Sweden: 2017. Berlin Filmfestival VIII. Genaration14plus 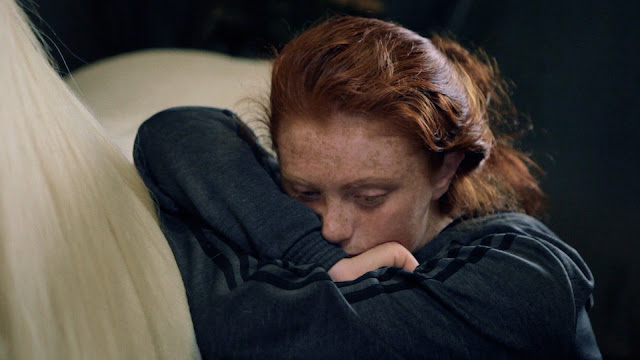 It is not the first time that I made exciting discoveries at the children and youth film section known under the terrible name “Generation” but a section which seems to be for me the only one in this festival which has a distinctive contour.
Another aspect of this year´s festival edition will stay with me: Except one example, almost all other films which inspired me, are documentaries. Even though all of these documentaries might have different approaches. Loving Lorna, for instance seems to be very close to the favoured documentary filmmaker of my country: Peter Nestler and Helke Misselwitz. I have seen Loving Lorna in Berlin´s most beautiful film theatre called Zoo-Palast and I feel again confirmed that documentaries belong to the big screen.

The film is a miniature of the life of an Irish working class family in a social deprived suburb of Dublin. The father is unemployed for some years and caring for his horses is his way to deal with it.
The mother suffers under epilepsy, which restricts her life in a certain way. She compensates this with her passion about books, reading, collecting all kinds of literature and bringing her private library always in a new order. The small insights in the dreams and longings of this people is filmed with big reverence. These insights are very intimate but discreet at the same time. One of their children is the 17 years old red-haired and freckled Lorna who has inherited the love for horses from her father. Her own horse is at the same age like her. She wants to become a farrier, a profession which almost becomes extinct. Her violent backache will probably prevent her from fulfilling her dream.

The film is close to the idea of André Bazin once described in his book on Jean Renoir, that “the things appear like accidental in front of our eyes and it is just a temporary privilege we enjoy.

The mother´s disease, the father´s unemployment are evident in these stories they tell in front of the camera. The “drama”, the tragedies hidden in almost every family story is here embedded in every day actions. I remember a critic writing on Yasujiro Ozu´s characters (the name escaped me) once that “Ozu´characters are to busy with life to explain themselves.”
Even though different in it´s formal approach, Loving Lorna is the second quite Ozuesque film I saw after Ann-Carolin Renninger´s and René Frölke´s wonderful From a Year of Non Events on this year´s festival.
The suburb itself is in the process of transformation. A shabby high rise apartment building is demolished. Power shovels with wrecking balls are often visible in this suburb.
When Lorna rides on her horse it appears like an anachronism. The Ozuesque love for things which irresistible disappear is present in each moment. When the last image is fading away, the struggle of this family will continue. But for this heartbreaking short time of 61 minutes we got a glimpse of this “circle of life”. Loving Lorna is a piece of more recent social history but history which gets for a short times faces, names , identities – literally bodies and souls. And these bodies and souls appear through or despite this strange phenomenon cinema which bases on a mechanical and chemical process standardized by an industry which never cared much about the art, documentary or poetry of cinema.

When the identities of these wonderful people disappear in the anonymity of the end credits, when the film takes literally it´s last breath a feeling for the transients of life stays long, long, long with me. This little masterpiece by Swedish twin sisters Annika and Jessica Karlsson I have seen on the mighty big screen of a cinema cathedral called Zoo-Palast (which enhanced ordinary life for 61 minutest to an almost cosmic event), I am sure I got a glimpse of the “lost paradise of cinema”, a term Wim Wenders once used for the films by Yasujiro Ozu.

a slight extended  version in German can be found here
Posted by shomingeki at 12:04 PM