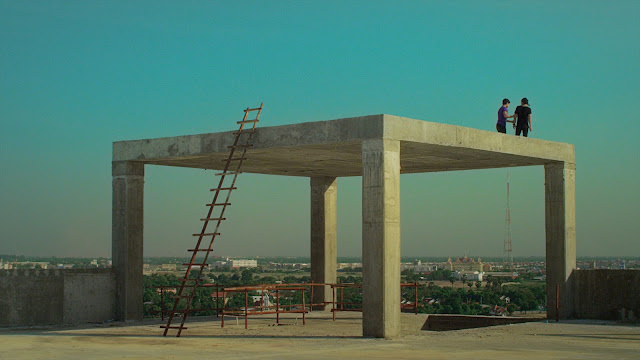 Diamond Island is the name of a new quarter in Phnom Penh still in it´s construction phase. Near the beginning, a computer animation presents how these quarter of luxury apartments, shopping malls or expensive hotels and restaurants will look like. The worker who are hired to fulfill this construction live in ugly dirty shags. Most of them come from the countryside for earning money ti support their poor families.. The false promises of the new and modern Cambodia of the 21.Century is nearly in every shot present. For the ones who can´t participate in this -so -called progress, they have only the illusion mostly performed on their smart phones. Bora is one of these young boy looking for their fortune in the big city. Most of the characters in the film, if boys or girls, have hardly finished their adolescence. They appear like extremely fragile beings thrown into this world, a Cambodia which is still dealing with the trauma of the auto-genocide and destruction of a big part of it´s entire cultural heritage in the past but already overrun by this other monster called Neoliberal capitalism. Even though the adolescent boys are talking about girls and sex, their existence is on edge. The work is dangerous and accidents happen.
The hopes and dreams these young people have are colliding with this huge construction project, a project when it is once finished won´t have any place for them.

When night has fallen the whole area get through different neon lights an almost engrossed appearance, a fairy tale-like illusion through which the characters move like homeless ghosts. As hopeless as life appears in this film, there are always these moments when the characters try to get traces of happiness wherever they can get it, very improvised Karaoke parties, a tour on a motor bike. There is a scene with a familiar talk between Bora and one of his brother who left his family long ago on an unfinished roof of an unfinished building. From above the environment looks like a long shot on a huge screen in a cinema. As delusive these beautiful moments are, they are definitely required for the characters surviving in this world.
There was this impressing documentary Le Sommeil d´Or, Chou Davy made in 2011 which follows the traces of the Golden Age of Cambodian cinema, a cinematic heritage which was nearly destroyed by the Red Khmer and which left only a very few surviving prints. Beside this achievement to safe a piece of almost forgotten film history, Chou is also part of a movement for a new Cambodian cinema.
In Diamond Island he uses the scaffolds, the unfinished buildings which are always present in the strange lights of the night for a strange and nearly subversive poetry. And only during night and in the colourful artificial light the city seems to belong to these characters.

There is an interesting work with the non-professional actors. Like in the early films by Hou Hsiao Hsien, Chou Davy uses often long and static shots. There is for example a long conversation between Bora and his brother. We see both in their profile, the big screen almost enhances the spatial distance between these alienated brothers. It is not only what they say that moves me, but the long pauses between their talking. That creates a kind of intensity, not because of the seemingly simple dialogue but through the faces and postures of the actors. There is the wonderful moment when Bora goes out one night with a girl. He hardly talks and theses young people´s happiness is rather guessable than visible. Later there is a very tragic moment when Bora´s mother dies. Like in a film by Ozu, Bora is informed about his mother´s death and a few cuts later we are in the middle of the funeral rites. The emotional impact of this tragedy comes with delay but than with all it´s weight.

Diamond Island, the first long feature film by Chou Davy is a beautiful complementary piece to Le Sommeil d´Or. While the first one is a look back to Cambodian history which includes the Cambodian cinema as well, the second one seems like a promising preview of a future of a new Cambodian cinema.

Posted by shomingeki at 3:25 PM No comments: