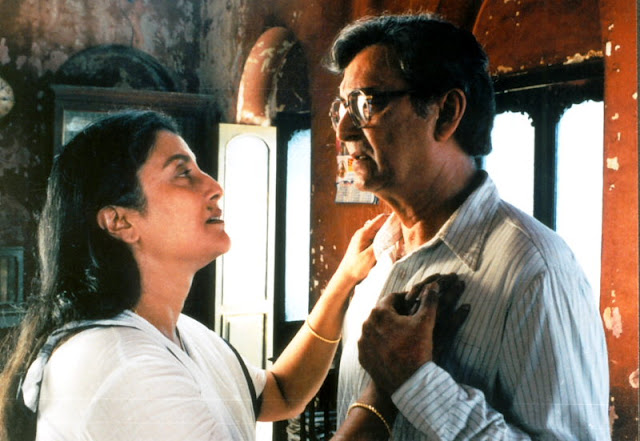 As I can not verify if the English title is a literally one, I like what it suggests, a house as a very concrete building but as well a film as an imagined building.

At the beginning we see several people gathered in a back yard for a funeral ceremony. Before we see a photograph of the deceased, they seem to gather like people who are waiting for a presentation on an imagined screen. A young woman Paramita is among them, her eyes covered with huge glasses. In flashbacks the film will tell about her memories, but will return like a refrain always to this funeral ceremony. The titles roll on images of empty rooms of this house with its green coloured windows which give the interiors a ghostly greenish light, a light which burns into our memory.

A wedding: we recognize Paramita as a young bride during a wedding ceremony and we see the mother in law Sanaka we identify from the photograph of the deceased at the film´s opening scene.
The first flashback introduces one tragic element of this film: women as prisoners in this house who will see very seldom the natural light of the world outside. Sanaka has a schizophrenic daughter and like a slave she is managing the household for her husband and her other sons. Her only escape are old films on television. In a short time Aparna Sen tells a lot about the characters and their relationship with each other, a kind of eloquent story telling which reminds me in some of the greatest storytellers cinema has ever originated like Ford Ozu or Sirk.
Aparna Sen herself plays Sanaka. As I am almost ignorant about her career as one of the most popular stars in commercial Bengali cinema and as I heard that she was very reluctant to perform in her own film – she offers an incredible performance. Sanaka is an aging woman during her menopause. When she speaks she chews almost permanently on a bethel leaf. Her first encounter with the young bride almost seems like a prisoner is greeting a fellow prisoner. When Paramita moves in this strange house among people who are talking behind her back about her we get a slight idea about the young Sanaka who also came into this house through an arranged marriage.
Another important person is introduced. We recognize an elder man from the funeral ceremony, Moni Biswas played by the great Soumitra Chatterjee), He was a former lover of Sanaka who never had the courage to escape with her and organizing an own life far away from this orthodox and repressive family system. When he visits this house from time to time to lend money from Sanaka, he seems like a ghost from another option of life he and Sanaka were not allowed to live.

Paramita gives birth to a boy. After short moments of happiness, a doctor finds out that the boy is handicapped, almost paralyzed and later Sanaka´s husband dies through an accident. But this tragic circumstances bring the two women closer together. There is a third female character typical in the desperate loneliness of female characters in Aparna Sen´s early films, Sanaka´s schizophrenic daughter Kuhuki. After an argument between mother and daughter, the narration will be interrupted and we see Khuku performing on the terrace a Tagore-song. It is one of the few moments during tthe flashbacks when we see the sky, a slight promise of a freedom outside this greenish prison. And while the film´s narration is suspended for some minutes Sanaka and Paramita are watching this performance and like so often in films by Aparna Sen, there is an idea of an imagined screen.It is a total moment of cinema devoided of any gravitation.

Paramita and Sanaka get for s short time the taste of a  new kind of freedom. First they go to a school for handicapped children and later they have dinner in Kolkata. Later the little boy dies and the life of Paramita and Sanaka moves in different directions. Paramita finds a new love and Sanaka sinks back in depressions.
The scene when the two women are separating is one of the most heartbreaking moments in the film. Paramita is young and strong, found a new perspective and will be divorced from her always drunken husband. Sanaka is still too much connected with the old family rules and will remain a prisoner. The naturally right for self-determination of human individuals is for women still a hard struggle. We hear Khuki singing about someone who stays alone on a sinking ship which appears as a paraphrase of Sanaka´s hurt feelings.

Even though Paramita is free from all burdens of her former family, she returns one more time to this house. Sanaka is seriously sick and totally exposed to the people she once served. Sen´s performance resembles now these Kurosawa-characters who are totally broken by grieve of fear and whose mental condition is visible in their crooked posture. Paramita organizes a provisory toilette hidden behind old Saris for the sick woman, Paramita creates for her a minimal privacy. This act of solidarity is as well an example how the characters in Aparna Sen´s films are often mirrored in each other. Sanaka almost becomes a variation of Paramita as an elder woman if she had stayed in this house which is not only framed by walls but as well by oppressive rules. This mirroring between her characters does not only reminds me in my beloved “beings of time” defined by Marcel Proust, it also creates the special magic that we get ideas about the different life times of the characters like in films by Renoir, Ozu or Renoir. This symmetry can always be broken through individual decisions like  with Anjan Dutt and Rahul Bose in Mr. And Mrs. Iyer, Konkona Sen Sharma and Moushumi Chatterjee in Goynar Baksho, Raima Sen and Moushumi Chatterjee in The Japanese Wife and finally between the two families in her “Romeo and Julia”-version Arshinagar.

At the end we leave with Paramita (Rituparna Sensgupta) the gathering for the funeral ceremony like we leave a cinema hall. The kind an Aparna Sen-films corresponds between the fictionalized reality and the reality of the perception of cinema and beyond belongs to me to the most exciting experiences I made with films and whenever the seeming contradictions between classic cinematic story telling and modernistic approaches of cinema is suspended, than in the films by Aparna Sen.

The only excuses I can offer for not having watched Paromitar Ek Din more often are the fact that it seems almost hidden between two of her masterpieces Yugant and Mr. And Mrs. Iyer and the second is it had once a deep emotional impact after a very traumatic India -trip which is o- f course – a different story. Anyway, one thing for sure. After my discovery of Ritwik Ghatak and Satyajit Ray, Aparna Sen is for me another important access to Indian cinema.

Posted by shomingeki at 7:05 PM No comments: