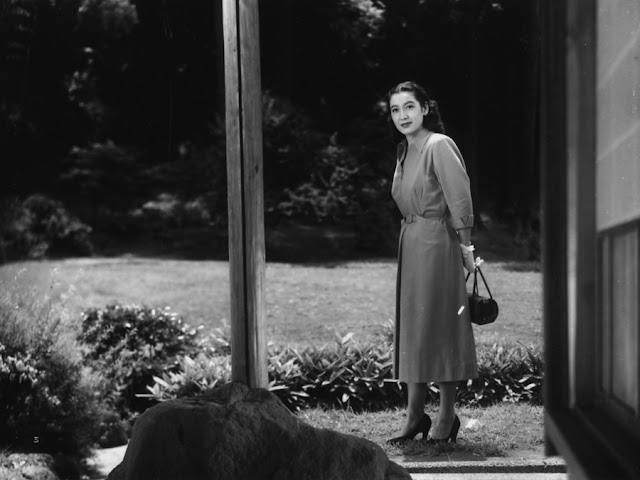 Setsuko Hara (whose real name was Aida Masae) was not only one of the most famous actresses in Japanese film history but also one of the few Japanese film stars who got international fame. And this international fame actually began long after she retired surprisingly from acting at the age of 43 right after the death of Yasujiro Ozu. And with the late discovery of Ozu in the western world, people began to be interested in Hara. There were a lot of speculations about her sudden return to privacy. She refused any interviews. The public person Setsuko Hara ceased to exist. She worked not only with Ozu but as well with Mikio Naruse, Akira Kurosawa and a lot of other more or less wellknown directors. She got her first role at the age of 15 in  tamerafu nakare wakōdo yo (Don´t hesistate Young Folks), 1935 and her breakthrough was in a German-Japanese Co-production called Die Tochter des Samurai (The Daughter Of the Samurai) by Arnold Fanck and Mansaku Itami. Even though a star before World war 2, it was her collaboration with Yasujiro Ozu, most of her admirers, myself included connected her. Might her Noriko in Tokyo Monogatari be her most famous performance, for my side her finest performance was the Noriko in Bakushu from 1951. Just her 6 roles in films by Ozu from which have seen most of them around 20 times enables me to the conclusion I have never spent more time with an actress than Setsuko Hara. It is not that Hara was the only great actress neither from Japan nor from the Asian continent. But I can name hardly any perfect chemistry between actress and director than Hara´s roles in Ozus films.

And she was by far more than a muse of Ozu. One of the typical mistakes in the reception of Ozu´s film is the interpretation of the roles by Chishu Ryu as Ozu´s “Alter Ego”. While Chishu Ryu and especially in the post war films was in Ozu´s films mostly a liberal father from the middle class. Most of his appearances in Ozu´s films are an idealized father figure. It was Setsuko Hara´s Noriko in these three masterpieces Banshun, Bakushu and Tokyo Monogatari. as the absolute family woman, the sister, the daughter, the widowed sister or mother and once in Ozu´s darkest film Tokyo Boshoku the wife who leaves her violent husband. Especially the daughter who does not want to get married in Banshun is probably the perfect female pendant to Ozu himself. The chemistry between Ozu and Hara is best described with the wonderful Da Ponte operas by Mozart which should be enjoyed with the best possible vocalists.
Another for my side stupid cliche about Setsuko Hara is that some people called her the “The Eternal Virgin of Japan”. About her love life we know not much more than about the love life of her Norikos in Ozu´s films. What we do not know does not mean that it does not exist. Especially in the context to her collaboration with Ozu whose films were often labelled as asexual lead to fatal errors as well in the reception of Ozu´s films as in Setsuko Hara´s roles in some of them. In fact Setsuko hara´s characters are a bit like Albertine on Proust´s “Search for the lost Times” and with androgynous, Ozu and Setsuko Hara´s performances are much better described than asexual.


What is so special in a lot of Asian and especially Japanese film stars if male or female is their characters are not really bigger than life but just like life. That goes especially for the Japanese shomingeki-film and Setsuko Hara is an excellent example for an actress who got famous by playing every day like characters. The list just among Japanese actors would be very very long. Even the Italian Neorealism had still its stereotypes in the relationship between the genders, the Asian and especially the Japanese cinema was probably in its sensitivity in this relation the most advanced on this planet. Like the legendary Chinese film star Ruan Ling Yu (1910-1936) Setsulo Hara, Hideo Takamine, Chikage Awashima and a lot more had first of all a strong screen presence. They played unforgettable characters, every day like but very complex. They are less objects of male desires like the films made much later by the so-called Japanese New Wave and despite the patriarchic Asian or Japanese Society at the time of the 1930s and 1950s these female presence and for example the presence of Setsuko Hara´s characters are by nature nearly subversive. Setsuko Hara´s retreat from acting goes with a historic caesura, the decline of the second Golden Era of Japanese Cinema.

The most complex character in the films by Ozu ever played by Setsuko Hara, was probably the Noriko in Bakushu from 1951. This Noriko can be rebellious , can even mock about the subordinate role expectation in women, but this Noriko has as well a very strong will to go her own way.. The famous scene with her sister in law on the beach of the ocean is probably one of the most beautiful moments in Setsulo Hara´s career. When she put of her shoes and walks on the beach, her more conservative sister in law follows after hesitating a moment her example and for these seconds these women seem to be free.

And at all it is again a very wrong simplification to think Setsuko Hara played subordinate women. The truth is her characters were moving on the very edge between traditional women and the rising of a new self confidence to walk her own path.
Her retirement from acting must have been a kind of prevision that the era of cinema in which she grew was close to its end, a few years after her retirement. After Ozu two other masters of Japanese every day dramas passed away, Mikio Naruse and Hiroshi Shimizu. Once established directors like Masaki Kobayashi or Akira Kurosawa had their most difficult time to realize their projects.

But there still traces of the glory of these Japanese every day like heroines like Setsuko Hara, there is for example Chieko Baisho, a kind of working class heroine mostly in the films by Yoji Yamada, especially in the late 1960s and 1970s. If there is an actress today in contemporary world cinema who has this magic of a strong presence but without implying a “bigger than life-character”, it is probably the Bengali Actress Konkona Sen Sharma.

Setsuko Hara died on September 5, 2015 of pneumonia. Her death was reported more than two months later, on Novermber 25. There were speculations about her life like for example a possible romantic involvement with Yasujiro Ozu. If there were any secrets about the life of Setsuko Hara, she who kept her privacy as consistent like Greta Garbo did or like Terrence Malick still does, Setsuko Hara passed away like one of the anonymous every day-like characters she embodied so often and whom she gave in so much films for some hours a bright presence. 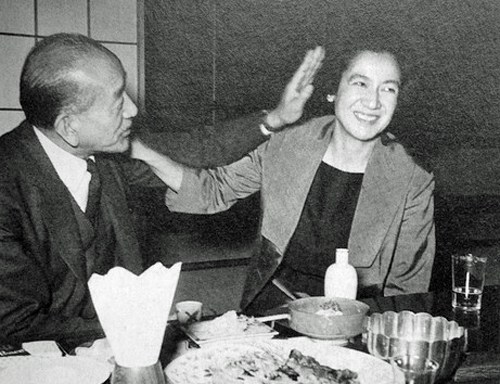 Posted by shomingeki at 3:13 PM No comments: