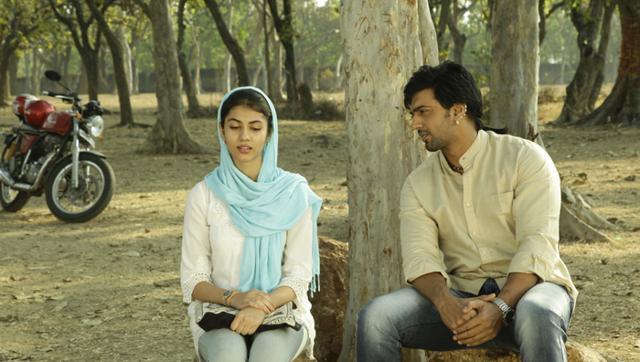 Ranajit/Romeo and Julekha/Julia have their first encounter their first kisses in a rest room. He, dressed like a woman, she dressed and masked like a man even with a false mustache. A masquerading play between a Muslim Girl and a Hindu boy. For a moment the man-defined border between religion and gender are suspended. When they meet for the last time Julekha is already shot by Muslim fanatics who confuse her (again dressed and masked like a man) for a Hindu man. After a last kiss and after he removed her false mustache, Ranajit, (this time dressed again as a Muslim woman) will be shot by Hindu fanatics.. Tow short moments which correspond with each other in a film of 152 minutes length. It is only one of the many facets in the narrative network of Aparna Sen´s second epic film after Goynar Baksho and here in an adaption from Shakespeare´s Romeo and Julia. If one wants to stuck with these two short moments there is already enough stuff for getting an idea about the enormous richness of Aparna Sen´s work as a film director.

In the cinematic landscape created by Aparna Sen one often has to find the own perspective. All she demands is a certain level of attention. A film by Aparna Sen is (like a lot of good films) like a house. If you want to inhabit this “house”, you have to walk on through all the rooms and niches this “house” offers. Rooms can change depending from what angle it is regarded. And you will get an idea of the architecture of this "house".The “Boy meets Girl”-aspect in Mr. And Mrs Iyer for example can easily be broken by the third perspective the one of the child which is easily free of predetermined gender ideology. In this “house” you sometimes looking for doors which literally open you up for new perspectives. If you never have tried, it can happen that the whole magic of a film by Aparna Sen goes undetected through you like neutrinos through the matter of your body.

It is said that Arshinagar was not a commercial success. Who is to blame for this I do not know. The lack of perception of the audience, a wrong promotion? But I am very suspicious about an impatient multiplex-oriented cinema culture where films after a few weeks are taking off the program. Aparna Sen shares this fate not only with other fine directors of her generation like for example Hou Hsiao hsien or Terrence Malick. Under the conditions of a  hasty greedy film market, a lot of classics would fail today without even the chance to get a re-release. A film like 2001: A Space Odyssey one of the most interpreted film in the last 50 years would not become the classic which it is today but the commercial disaster which gleeful people forecasted in 1968 just after the release of this film. (1)

Arshinagar is one of Aparna Sen´s angriest films. She has translated Shakespeare into modern India and finally into the modern world. The Hindu-Muslim conflict is only the surface of a power game between two rich families and the quick greed for money is the actual religion, the Hindu-Muslim conflict only the excuse for it. The heads of this two families might be separated by religion but they are almost exchangeable These clans move between dubious dealings with real estate and drug money which has to be cleaned. The line between cold hearted speculator and gangster is nearly invisible. A shopping mall is supposed to be built in the ghetto of the town. To get rid of the people who live there anything is possible: bribery, murder, threatening. If that does not work a riot between Muslims and Hindus will be incited. More homeless people for a shopping mall just for the profit. It is a sharp image about the modern world and it does not mind if you live in any Indian big city, Berlin or anywhere else.

Arshinagar is a love story, a musical and a gangster film and finally a mirror of the modern world at the same time. It is not just the simple dogma of cinema as a mirror of the real world, but the mirror as a window or a magnifying glass to the many facets of this world. The English title “Mirror Town” is a very poetic title and as well a wonderful word for the silver screen itself. But this mirror will be splittered. We see that already in the opening titles which are written on these splitters and at the end credits. After Yugant, Arshinagar is another film by Aparna Sen with a nearly apocalyptic finale. The end of the world includes as well the end of cinema as an example of the collective memory of the human civilization.


I remember long time ago, I saw a TV essay on Erich von Stroheim by German film critic Helmut Färber. In the commentary on Stroheim I remember the sentence, I think it was related to Greed : “Before the people destroying themselves, they destroy their memories.” In Arshinagar, the Romeo and Julia Story is mirrored in a memory of a likely love story by Ranajit´s mother and Julekha´s father. Julekha´s father has already “destroyed his memory”. He is not only the biggest obstacle for the young lovers but he is as well one of the administrators of the destruction of the slums and finally for the dead of the young couple.

The film is introduced by a woman who owns a puppet theatre. She introduces for now Romeo and Julia as a puppet play and some of the leading characters as puppets at the beginning while the film introduces the real characters. Just this opening is for me characteristic for Aparna Sen´s narrative virtuosity. It is as well only another facet in her cinematic world. Side by side with this virtuosity we see the hand of the puppeteer which is a good image that her films always give an idea how they are made. We see art and at the same time an artist at work. The films by Aparna Sen have often an analytical aspect, a hint how it is made. And this is not in competition with the magic her films can evoke. That is what I meant when I wrote on Mr. And Mrs. Iyer that “Aparna Sen is analytical and poetic at the same time.”

The universe in the films by Aparna Sen is not always an isolated one. 15 Park Avenue end literally in another universe. In the farewell scene of Mr. And Mrs. Iyer  Rahul Bose seems to leave into another dimension which is at the beginning a blurred and than we see people waiting for him. In Goynar Baksho the ghost is only visible for Konkona Sen Sharma´s character (later for her daughter) and the audience. And at all there are often things the audience sees, the characters are blind for. In Arshinagar appears in two scenes a Baul singer and at least in her second appearance I am sure she is like a ghost only visible for the audience. Her song and her dance happens out of the gravitation field of the narration established by the puppeteer at the beginning. Her movements evoke a kind of centrifugal force. Her first song as I understood through the subtitles could be a paraphrase of the beginning love story of Ranajat and Julekha. But at the second time she appears more ghostly, more isolated in of the ghetto where the angry mob of Hindus and Muslims are killing each other and destroying the whole quarter.
She sings:
All you say is me.
Who is this I, tell me
The one deep within me
you forgot to see.
Her movements make me almost dizzy. Her desperate effort to be heard fails. It is only the audience which can see her, all characters in the film are blind for her heartbreaking performance. We are alone with her. This moment hunts me since I saw the film the first time. It is as moving and mysterious like the Baul scene in Ritwik Ghatak´s masterpiece Meghe Dhaka Tara. Even though she remains untouched by the riot around her, she appears like a vulnerable and desperate soul. (2)

In my imagination I see Aparna Sen in this film between the introducing puppeteer and the performance of the Baul singer. The artist, the artist´s relationship to the world like it is and the vulnerability of the Baul performance, for some reasons Arshinagar is one of Aparna Sen´s most disturbing films since Yugant.

Every new film by Aparna Sen is another lesson about what cinema is what cinema can be. If an excellent and rich film like Arshinagar has no place in film theatres all over the world we should be very very worried about the future of cinema.

Posted by shomingeki at 1:21 PM No comments: