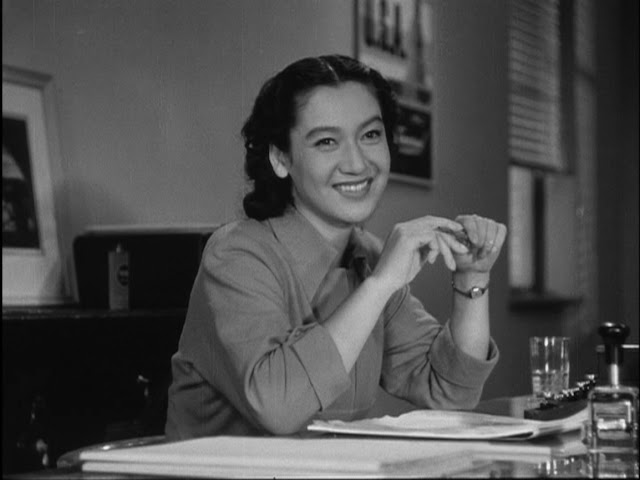 Why Bakushu is presented as a “Berlinale Classic”, I really don´t know. In the last 12 years it was screened at this film festival only in retrospectives. But than, who cares?
Among at least a dozen masterpieces, Bakushu has a special place in my heart - and that for exactly 28 years!.It is a very paradox film: at first it is even for Ozu a unique film. He “wanted to show the cycle of life without any dramatic Ups and Downs”. The film consists rather of a series of episodes, each of them as beautiful as a haiku. In fact it is Ozu´s most radical narrative experiment. On the other side it is as well one of his most accessible and most charming film. I know it is meaningless to put one masterpiece of Ozu against another one, but Bakushu (wrongly translated with Early Summer) is exactly what Wenders once said about the films of Ozu, a lost paradise of cinema”.
Most of Ozu´s films are about every day life and every day characters but Bakushu has a slightly cosmic dimension. The lines of sight in this film leads often to the heaven (the old couple watches a balloon which got loose), the sight of the mother to an undefinable direction until she accepts that one of her sons who is missing in the war will never come back or the scene on the beach of the sea with one of Ozu´s rare camera movements which literally simulates the rotation of the earth. A likely moment we find as well at the end of a film made in the same year, Jean Renoir´s masterpiece The River.
Last but not least, Setsuko Hara who passed away in September 2015 (maybe the Berlinale screening is finally a homage to Setsuko Hara) offers here probably her finest performance. Her Noriko in this film can be rebellious, she has a lot of humour and she has the grace of the countess Almaviva in Mozart´s La Nozze de Figaro.
Bakushu is a film with a nearly uncanny and perfect balance. Always when I remember this film (exactly 124 minutes) it becomes an own endless universe itself.
If there is a film in the history of cinema which offers a sense for the transience of life than it is this phenomenon Bakushu. Behind the banality of every moment one can always feel the infinity.
One of my favorite moments (okay the film seems to consists of favorite moments at all) is when the grandfather makes a small walk to buy bird seed (!). He has to stop at a railroad crossing. The crossing gates are closing, a train passes by. With a sigh he sits on a stone and waits and we wait with him. There is no describing of this moment which gives justice to the impact it had on me. The force of the passing train seems to be the equivalence of the force of the inexorable passing of time.
One reason that the universe of a film by Ozu is always expanding beyond the limited length are the memories of the characters which go far back in time. And we are only privileged to see this temporary limited segment of their life. Ozu tried this once again, once in Soshun in 1956 and once in Akibiyori in 1960. The brother of Noriko who is missed in the war is present in the memories of this family.
For what reason ever Bakushu is screened at this festival under “Berlinale Classics” (a 4K Digital restoration) , it offers one of the most precious gifts cinema has ever originated.

Posted by shomingeki at 9:05 AM