A brief appreciation of Aparna Sen on the occasion of her 70th. Birthday. 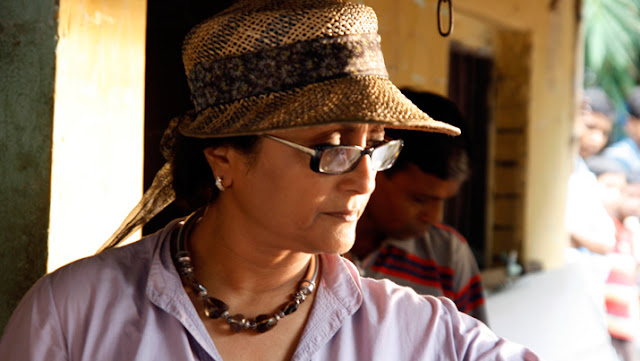 There is an excerpt from a masterclass in Bombay in 2010 with Aparna Sen on YouTube which gives an excellent introduction to the working process of Mr. And Mrs. Iyer. Frustrated after a project she could not realize, Aparna Sen began to write a script using the computer in the room of her daughter. She said “the story began “writing itself”. While her daughter Konkona Sen Sharma watched over her shoulder and gave some comments, Aparna Sen finally decided to cast her for the role of Meenakshi Iyer. This anecdote became in my imagination already a scene from a film. When-, or whoever will make once a bio pic or an essay film on Aparna Sen and her work should begin with this “scene”. Last but not least this anecdote is a kind of “Making Of” about one of my favorite Indian films in this still young century which I already have seen around 30 times.

A likely crush on a film by Aparna Sen, I had some years later with The Japanese Wife.
My fascination for the films by Aparna Sen is not easy to explain. Instead of words and superlatives, there are always certain moments of these films which come to my mind and most descriptions can not even get near the enormous impact they had on me. But beside the fact I can enjoy the films by Aparna Sen now as examples of great cinema, there is even more they have evoked in me. They gave me a new and deeper understanding of what cinema is about, a lesson only very few books ever written on cinema could offer me. And even in my long review on Mr. And Mrs. Iyer I already knew the ideal piece on this film should be rather an audiovisual essay than a text. Before I saw Mr. And Mrs Iyer I really believed I had seen and read enough on cinema to know my way, but I was wrong because I was only tired and sated and in my vanity I considered myself as smarter than I really was. In that sense Mr. And Mrs. Iyer made me this precious gift to enable me to rediscover all the glory of cinema and especially the joy to watch films I had lost without being aware of it.

There is a total justice in the films by Aparna Sen about the two aspects of cinema, the one is to dream of a life we never lived and the other one, a reflection about what we are and in what world we live.
Near the end of Mr. And Mrs. Iyer we see Raja (Rahul Bose) bringing coffee for Meenakshi (Konkona Sen Sharma)and himself in their train compartment. He takes Meenakshi´s baby in his arm and or a moment Meenakshi leans herself on Raja´s shoulder. For seconds they who were total strangers some days ago are very close. One single cut of breathtaking precision brings them and us back to the ground of reality, Meenakshi back to her husband waiting at the station, Raja (a wildlife photographer) back to his editor and finally us to the end of the film and our return to our own reality.

In my imagination, I always wonder what Max Ophüls, Francois Truffaut or Douglas Sirk would have think about Mr. And Mrs. Iyer, The Japanese Wife or Goynar Baksho. If there is ever a male pendant to Danielle Darieux´s tragic obsessed lover in Madame de.. by Max Ophüls than it is Rahul Bose in The Japanese Wife.

The most beautiful moments in Aparna Sen´s films are often moments when the characters are watching something like they look at a big screen: In The Japanese Wife, Rahul Bose at the shore of the river where Hindus perform their funeral rites. We see his back and his point of view is an extension of our own perspective. This river has killed his parents and the direction of his look is directed to something that is lost forever. Just this image has the power of a landscape painting by Caspar David Friedrich or a moment in a film my America´s landscape painter of cinema John Ford.
In Mr. And Mrs. Iyer, Meenakshi and Raja are looking through the objective of Raja´s photo camera. It is a rare moment of contemplation. They are watching deers in the forest and again it seems they are watching to a big screen. There is also the amazing scene with the young Mrinalini in Iti Mrinalini on the beach of the ocean with her daughter. It is the most beautiful moment in this film which will be lost a few moments later through tragic circumstances. Here they don´t only watch like to a big over dimensional screen but the whole world around them becomes a screen, the scene is as well a kind of total cinema.

It is time for the world in and outside of India to discover all the films by Aparna Sen in retrospectives and at best with restored film prints.

inks:
-IMDB site for Aparna Sen unfortunately it does not include her Television work, her new short film and her next film which will released soon).
-English Wikipedia site on Aparna Sen


Posted by shomingeki at 6:25 PM No comments: