Notes on Margarita With A Straw by Shonali Bose, India/USA: 2014 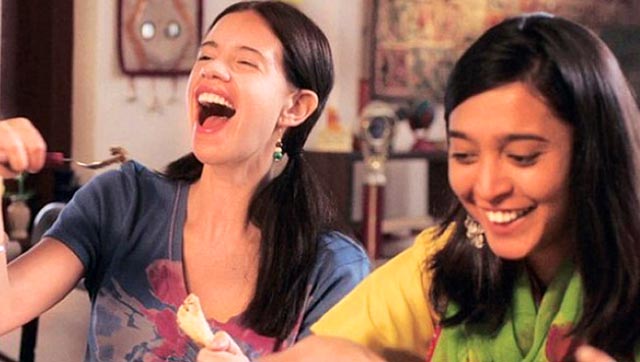 “I think the great artists (..) have always thought with the heart.”
/Douglas Sirk)

Cinema is not only a kind of magic but it includes often as well a reference to this mighty apparatus where cinema is built with. I remember that I wrote more than 20 years ago on Hou Hsiao Hsiens masterpiece Hsimeng Rensheng, a bio pic on a famous Taiwanese puppeteer (The Puppetmaster, 1993) something like "that we are first absorbed by the performance and later we see exactly the hands who causes this magic.

Laila is since her birth disabled by cerebral palsy. As she can´t walk on her own she moves in an electric wheel chair, This device enables her to lead a social life, university shopping or meeting friends. It is almost like a dolly or a crane for the camera which enables us to participate in the this piece of the world revealed in this film. For approaching a certain standards in life quality, Laila is depending on these devices like wheel chair or a computer tablet with voice program. Like we move virtually through the space the film reveals, we do it like Laila with the help of technical devices.

If one read the synopsis of this kind of coming of age-drama about a disabled young woman, her desires, longings and losses one expect a lot of melodrama. Invited to New York for a fellowship in creative writing she fells in love with a lesbian girl Khanum who is of Pakistani and Bangladeshi origins. Back in her home town Delhi for summer vacation she has not only to deal with her new sexual identity but also confront them with her mother´s conservative attitude about love and life.
When I finally saw this film, I was astonished by the kind this dramatic story finally got flesh and blood in a very nonorthodox way. There two competing forces in this film. The first is the tendency of identification and to be absorbed in this story. It begins with the analogy of the movement of Laila´s wheel chair and the movements of the camera. But we are also very close to Laila´s every day life, her longing for love and last but not least to her very special humour. The other tendency is that the film seems to be resisting itself to drift into pure melodrama. And there is an analogy to this tendency in Laila´s reluctance to be seen through pity.

When Laila for example masturbates after watching a porn site in the Internet, she suddenly turns her back to us. This image motive when she turns the back to us happens several time in this film. In this moment it seems our presence as a voyeur is not welcomed at all.
Much later in the film Laila confesses to her girlfriend Khanum that she has betrayed her once with a British boy. There is as well a moment when both women turn their back ti us. Like so often in this film some even intimate secret the characters shares with us, others not.

As the film proceeds, we do not only witness that a lot of Laila´s longings and desires remain unfulfilled, our own desire to be absorbed by a melodramatic identification will fail sometimes too. The dynamic between the tendencies of identification and reflection is one of the film´s most striking aspects. The most dramatic event, the death of the Laila´s mother is almost Ozu-esque. The sound is reduced to an absolute minimum. We hear only the sound of the medicinal apparatus on which the life of Laila´s mother depends on. Than a sudden beep invades the silence and a doctors says: “Sorry, she has gone.” As the soundtrack is mostly composed of a lot of nuances creating an every day-like atmosphere and with a very emphatic music – in these moments it seems to disappear almost completely. That remembers me in the Japanese term Mu which means emptiness or nothingness.
A likely moment we have again in a scene of a confrontation between Laila and Khanum. After a heavy crosstalk, a moment of silence will follow.  The loneliness of the characters , occupied by their grieve or losses and this strange loneliness of the spectator come together in an uncanny way.

I still remember Konkona Sen Sharma´s brilliant and almost minimalistic and nearly "Noh-like" performance in Shonali Bose´s debut film Amu. There was a metamorphism of Amu from an every day like drama into a tragedy caused by a concrete historic event. In Margarita with a Straw the film changes alway from every day like and seemingly event less story telling to drama and back, a rhythm which can be seen in the whole film. While Sen Sharma´s Amu becomes almost a prisoner of her own past like James Stewart in Hitchcoc´s Vertigo, Kalki Koechlin´s equally impressing performed Laila is in most parts of the film despite all her losses in control of her own life. She remains in the Here and Now. She does not always approach the happiness she is longing for but she is aware in the sense of Marcel Proust "about the reasons which prevent her from being happy".
Sen Sharma´s Amu has in the narrative strategy of this film the double function as the main character but also as the mediator between audience and the film´s fiction. This strong relation ship will vanish completely in this great last moment when disappears and the end of the film´s fiction is marked with a slow train which crossed the frame diagonal. In Margarita With A Straw, this other wonderful portrait of a woman the relationship between spectator and Kalki Koechlin´s Laila works different. When we often have the feeling she is just performing for us, she gets finally a life on her own. In some moments we see only her face with traces of tiredness and it is hard to say if this tiredness is performed or if it is it the real tiredness of Kalki Koechlin (who considered her role as physically very demanding). Shonali Boses´s film has often these touch points between the virtual universe of the film´s fiction and the reality beyond the film. These are evidences of a truthfulness of Bose´s films which is hard to describe but traceable in her films.

At the end, Laila´s mother has passed away and her girlfriend Khanum has raturned to New York. The final moment of this film (even though much more cheerful than the famous endings of a film by Ozu) is a bittersweet variation of the Japanese term mono no aware. It is a conclusion of experiences like Tom Milne once defined the end of Ozu´s Tokyo monogatari.
At the hairdresser, Laila gets a phone call. Some friends invite her to see a movie. "I have a date", she says. We see her reflection in a mirror (like we often did in the film) and we will later learn that this date is finally a date with herself. Her father gives her a ride to a place where she will enjoy her beloved cocktail Margarita "with a straw". She smiles while enjoying her cocktail and blows a kiss to herself reflected in another mirror. For a moment this mirror frames her like a film image which is again framed in the whole aspect ratio of the film format.After having much struggled in this film with her disability, her journey finally leads her to a moment of accepting herself and finally the things like they are.
A cheerful but at the same moment very moving last moment which also includes the fleetingness of the things the whole film has told about. With this last smile we are finally gently dismissed from the film which was partly inspired by Shonali´Bose´s cousin and partly by the director´s  own experiences.

The credits begin with the Rumi-quotation: “ The wound is the place where light enters you.” and a dedication to her late son who passed away under tragic circumstances.
Credits of a film this caesura between the end of the virtual reality of a film and the world we live in is for me often a very special moment. Soon the experience we made with this film will become a memory. It is also a moment of recapitulating the whole experience the film has offered and the emotions it has evoked in me. There is this magic aspect in cinema: A film can enchant you and they can be truthful as well. Margarita with A Straw is one of these miracles. 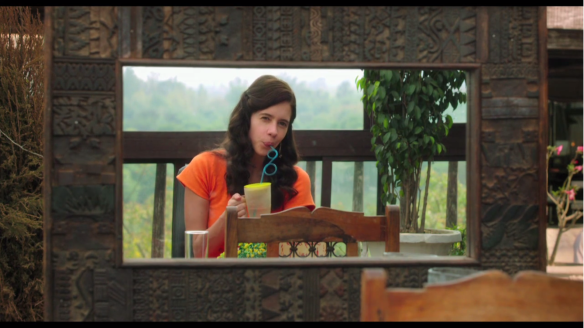 Another draft version of this text included a passage which suggested to define Margarita with a Straw as a kind of "Caméra Stylo", those definition of radical personal films which are filmed like written, a term which fits very different kind of films, documentaries, essay films but also narrative films. For now I discarded this chapter completely. But after watching the whole "Making Of"- bonus features on the Indian DVD I still think this could be another interesting aspect of this film.
I also discarded a comparison from a more recent version of this text in which I compared the last smile of Kalki Koechlin with the smile of Sean Penn at the end of Terrence Malick´s  autobiographical inspired The Tree Of Life. This idea was a very strong feeling but probably better saved for an audiovisual essay than a text.
Posted by shomingeki at 3:37 PM No comments: