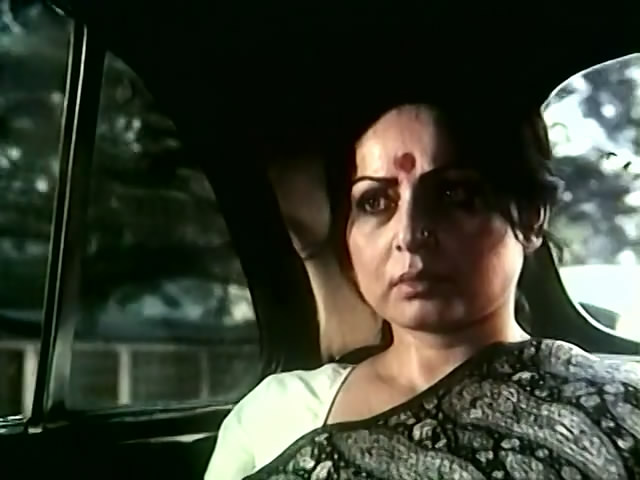 A look into the films by Aparna Sen which I learnt to love in the last 10 years offers for me two options: The first one is the joy and inspiration I got from my favorite films, especially Mr. And Mrs. Iyer and The Japanese Wife. The second one is to learn more about her work as a whole which is more a kind of  historic view to find traces of her evolution as a film director.
Parama is her second long feature film and among my Bengali friends there are quite a few who consider Parama as one of her finest works.

Beside being a great story teller, there are several currents in her work. I think one of her big themes is often the different perceptions of reality by her protagonists often filtered through their subjective vision of the world. Aparna Sen once called Parama as her “most feministic film”. But she never used film just for delivering an ideological predetermined messages. She is probably one of the few contemporary Indian filmmaker whose realism should be seen in a more complex way like for example the ideas of André Bazin. As well Anjan Dutt´s definition of a “magic realism” in his text on Goynar Baksho is a good hint to her work.

Parama is a woman around forty who has married into a big and wealthy middle class family. She lives with her husband, her children and her in laws together in a big house. At the beginning when the whole family is assembled, it takes some time until we recognize the main protagonist and as well until we finally can distinguish her from the female servants. Even though the film was already 20 years old during my first voyage to Kolkata, this moment of recognizing the woman of the house evoked a Déjà-vu remembering some invitations to Bengali families I followed.
One family member introduces the photo journalist Rahul to the family. He wants to make a series of pictures of “an authentic Bengali house wife”. And finally he gets the permission to shoot pictures of Parama. A love affair between Rahul and Parama develops We do not know if he is in love with an image of Parama but we can guess Parama discovers different images about herself beyond being a mother, a wife, a daughter in law or a sister in law.

Like in Virginia Wolf´s A Room For One´s Own, Aparna Sen´s women are always struggling for a place in the world which is their own, the old Anglo-Indian lady in 36 Chowinghee Lane included. While the women in Sen´s earlier films are rather defending the small space they have for their own than conquering new one the heroines of her last 5 or 6 films and especially through some characters characters performed by Konkona Sen Sharma are sometimes conquering new ground for themselves, most evident in Goynar Baksho. Even Sen Sharmas orthodox Hindu woman Meenakshi in Mr. And Mrs. Iyer who is like most of Aparna Sen´s women a lonely and oppressed middle class woman demonstrate through her active glances a real resistance again being part of an image someone makes for himself of her. She is not anymore captured through a male´s view but herself looking to the world around her. There is probably an interesting development between the nearly sad souls of Sen´s early women characters and the departure of Sen Sharma´s character in Goynar Baksho.

Parama seems mostly to be captured in internal rooms of the house. Only some excursions with her lover Rahul and some meetings with her artist friend interrupt her isolation.
On one excursion Rahul and Parama climb on a building. It is high and seems to be ruinous. While the photographer moves as skilled like a cat, Parama feels only dizzy and is scared to fall. He has no sense for gravitation, she senses the gravitation extremely strong. Through this moment of physical actions we also get an image about this love relationship.

The soundtrack often uses melodies of American folk songs evident as Paramas dream to go with Rahul to America on tour and playing her sitar. The music emphasizes this longing and at the same time it refers to the forlornness of this dream.

There is a remarkable scene which is a good example for the art of Aparna Sen:
Paramas husband is on a business trip in Bombay. Parama who feels lonely and scared phones him. We see her almost huddled in her room like a prisoner in her own home while he looks out of the hotel window to the open sea and a beach boulevard (probably the famous St. Marine Drive). He talks to her like to a scared child and not with a grown up woman. After the phone calls he dictates a letter to his young and beautiful secretary. But than he says that it is late and they shall stop working for today. As he tries to invite the young woman for a drink we see the secretary (who sits on a sofa) stretching herself for collecting all the files which are scattered all over the sofa. Actually a very banal moment but during this movement when the young woman seems almost lying on this sofa, this moment now from the business man´s subjective perspective becomes already part of his erotic fantasy. It is a very short moment but this very banal action of the secretary is suddenly captured in a predetermined male view and in these few seconds the young woman is totally captured in the image the middle aged man has from his secretary. The moment is also a brilliant example for Aparna Sen´s sensitivity for the different perceptions of of the world by her protagonists.
In the last quarter of the film Parama´s husband will finally discover her affair with Rahul through a photo magazine with pictures from Parama and a handwritten personal dedication of Rahul. He reacts very harsh, calls her a whore. What Parama does not know is that her husband already made in his fantasy in his imagination for the moment (I described above) a whore out of his secretary. When he discovers literally different images of his wife which happened out of his control and out of his sense for possession, his gentle petty bourgeois facade fails.
The film turns now to be very bleak and develops to a suicide attempt of Parama and a deep mental crisis.
And again at the end there is another variation of Aparna Sen´s attention for the different perceptions of reality of her characters. For her family, Parama is now a mentally diseased and very fragile woman. They forgive her out of pity. But she has one of the clearest moment in the whole film when she finally applies for a small job as a shop seller for Sarees. This is a clear decision a step into a more self determination. Parama is still captured, isolated and lonely. But in one of her last scenes she looks out of her window. And like so often in Aparna Sen´s films one of her characters look at something like an invisble  big screen.
Aparna Sen´s films are not only dealing with the art of cinema (this beautiful definition of cinema in Wim Wenders´ Kings Of The Road), they are in fact an excellent school of seeing.