Some thoughts on Blue Notes by Bill Mousoulis, Australia: 2006 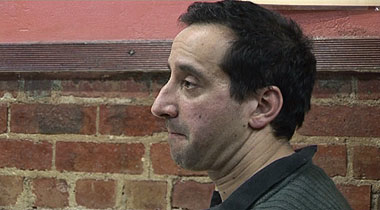 Blue Notes is the fourth film by Bill Mousoulis I have seen so far. To describe the strange fascination which some of his films evoke in me, let me use this image: They are like an imagined long walk with him through a city and its people. At the beginning the people and locations are strange to me but when the walk is over I am full of stories and familiar faces.
Blue Notes is both, a compilation of five different stories which interact with each other – sometimes more, sometimes less – but it is also like a documentary on how a narrative film comes to existence out of moments, observations and the visible matter of the world. There are two opposed movements in this film: To use an example from physics it is how the matter is formed to parts of the world which can be named and how parts of the world disintegrate itself to nameless matter.

The five stories deal mostly with couples and individuals who either try to get their life in order or people whose lives goe apart. There is for example a drug addicted young man who is indecisive if he shall go on to subdue his addiction or writing a song or playing in a band. Another person, a young woman is violently abused by her boyfriend and the life she installed for herself goes apart in an instant. There is also a Greek immigrant called Kosta who is working as a watchman in an underground parking and who is almost a prisoner of his loneliness and nostalgia for his native country which is in unreachable distance from Australia. Kosta, joins a Greek choir which interprets old Greek songs. For now it the only home he can get. This episode exists as well as a separate short film (Kosta).

The stories in this film seem have literally grown from the formed matter we see, the locations, the different apartments, streets and people. Moments of every day actions turn sometimes into very intense scenes. These traces of individual drama become for a moment shining cinematic moments and soon these traces will disintegrate itself.

Another of these five stories is about a middle aged married couple. Like in a film by Ozu we see several variations of one and the same every day ritual. The man comes home from work, welcomed by his wife and his two dogs. The wife is preparing in the kitchen the dinner. He greets her and pours a drink for her and himself than he sits down on a sofa and reads a book or the new paper and some moments later his wife joins him. There are three or four variations of this ritual in the film. But from variation to variation it reveals more and more despair. While waiting for her husband, the wife discovers a book on depression her husband is just reading.
On another evening, the woman is waiting again for her husband´s homecoming. He is late, she gets anxious and finally leaves the house. She finds her husband dead in his car. This tragic moment hit me totally unprepared and reminds me in Ozus last film Samma No Aji. Just alone this moment makes Blue Notes unforgettable for me.

The wonderful episode with the Greek immigrant seems to be like a contrast to the other episode full of despair. As he is introduced as a hopeless lonely man stranded in Australia he at least makes a huge step out of his isolation when he joins the Greek Choir. There is this wonderful moment when he practices the Greek songs in his small apartment and when his face reveals slight traces of happiness.
Blue Notes is a realistic view on people living in a big city but at the same time it is full of playfulness in its formalistic and narrative approach. Bill Mousoulis´ view on these people is discreet but full of affection and compassion.

The use of music in Blue Notes is another evidence for the films´s versatility. Melodies played on acoustic guitars or hard Rock rhythms. Sometimes the music is just part of the soundtrack and sometimes we see music just performed by a singer or a band – and sometimes we listen and watch musicians during rehearsals. The music is an echo of the film´s approach. As I was in the segment of the middle aged couple or the wonderful one about Kosta nearly absorbed, there are other moments where I had rather the feeling to be a witness of the creative process of film making. In this sense, Blue Notes offers both; a fascinating and inspiring vision of cinema but as well an idea where this fascination is actually originated from.
Blue Notes is poetic and analytic at the same time.

This and many other films by Bill Mousoulis on DVD can be purchased here.

Posted by shomingeki at 3:00 PM No comments: